Tennis player Cameron Norrie is going pro after this semester 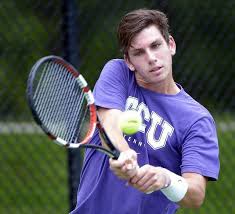 Cameron Norrie is leaving TCU after he finishes his junior year this semester to compete around the world as a professional tennis player.

The intercollegiate Tennis Association ranked Norrie No. 1 in the division I Men’s National Singles Ranking Tuesday, and the conference honored him as the Big 12 Player of the Week.

This marks the sixth Big 12 weekly honor in Norrie’s career and his third this season. He’s the only competitor to win every Big 12 match he competed in this season with a perfect 10-0 record in singles and doubles.

Norrie was born in South Africa and moved to Auckland, New Zealand at a young age where he played squash in the driveway with his mom, and then started playing at a local gym.

When he was 15-years-old, he went on a tour around Europe, traveling for five months.

At age 16, Norrie changed his nationality from New Zealand (NZL) to play for Great Britain (GBR) and moved to London by himself. He lived and trained at the National Tennis Center, and then lived with a host family for two years while he continued his training.

“I hit a rough patch when I was 18, I couldn’t win a match when I was touring Europe,” Norrie said. “I was struggling, I wasn’t enjoying my time on the court, I wasn’t happy, so my mum and I started looking into American universities.”

That’s when Norrie enrolled at TCU to play tennis for the Horned Frogs.

“College helped Cameron to grow as a person and as a tennis player” said teammate Guillermo Nunez of Santiago, Chile. “He got more mature and learned how to handle different kinds of situations.”

When he was a teenager living alone in London, Norrie said that all he wanted was to be a professional tennis player. Now, he’s headed to the pros in a few weeks, turning his dreams into a reality.