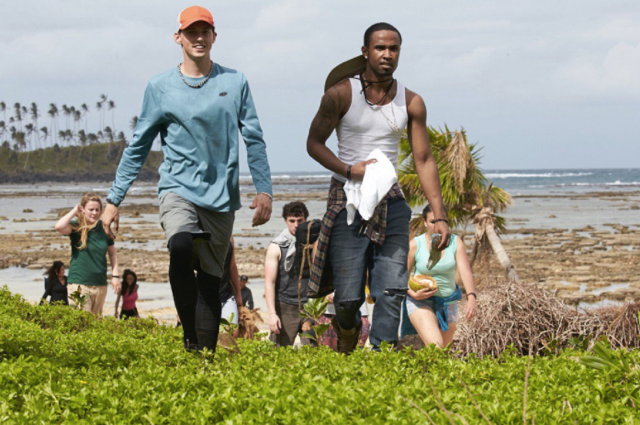 Alex Apple and nine other contestants attempt to survive 40 days on an island in Fiji Photo Credit: MTV

“Stranded With a Million Dollars” is a new reality show on MTV. Ten contestants were dropped on a deserted island in Fiji and challenged to survive 40 days for the chance of splitting a million dollars.

But here’s the catch: The contestants aren’t given any necessary tools to survive and each tool costs thousands of dollars.

Alum Alex Apple said that “everything is crazy expensive, so a machete may cost $10,000.”

Apple said the 40 days weren’t easy. For the finale, he was joined by Natalie “Makani” Paul, Cody Dunlap and Gina Lam. Apple said he and Gina were allies throughout the season and they were up against Cody and Mikani, who were also allies.

Together, the two teams tried to sabotage the other so one team could win.

For instance, Apple said Team Dunlap and Paul attempted to dehydrate Apple and Lam by first stealing their pot to boil clean water and then pooping in the only clean water they had.

He said, “Gina and I were really struggling for a while, but our strategic moves helped us survive and not let the other team out survive us.”

Apple said all four remaining contestants survived and took home $124,418 each after they successfully survived 40 days and 40 nights. “I want to save and invest this money for my family one day and help others,” he said.

Since the show has aired and he’s received a stash of money, Apple said his life has changed in some ways. He left his broadcasting job in Vermont and moved with his girlfriend to Lancaster, where he works as a freelance journalist.

“I figured I’d take a year off and find things that make me happy,” he said. “However, I want to get back to broadcasting because telling stories is something that I enjoy.”

Right now, Apple said he is enjoying Lancaster and interacting with his fans on social media. “It’s an interesting experience to have thousands of people following me on social media. Some people love me and some people hate me,” he said. “Either way it doesn’t matter because I’ve enjoyed talking to fans.”

When asked about him joining reality TV after another TCU alumna, Olivia Caridi, appeared on season 20 of “The Bachelor,” Apple said he’s thankful for her friendship.

“We were both news reporters and ended up being in scenarios where we were not universally loved on TV,” he said. “Having Olivia go through reality TV first was nice because I got to share a unique experience with her that many others don’t.”

Apple said he is excited to see who will be the next Bob Schieffer College of Communication alum to appear on reality TV and to also look out for season two of “Stranded With a Million Dollars.”