Skoug’s late homer gets TCU within a win of Omaha 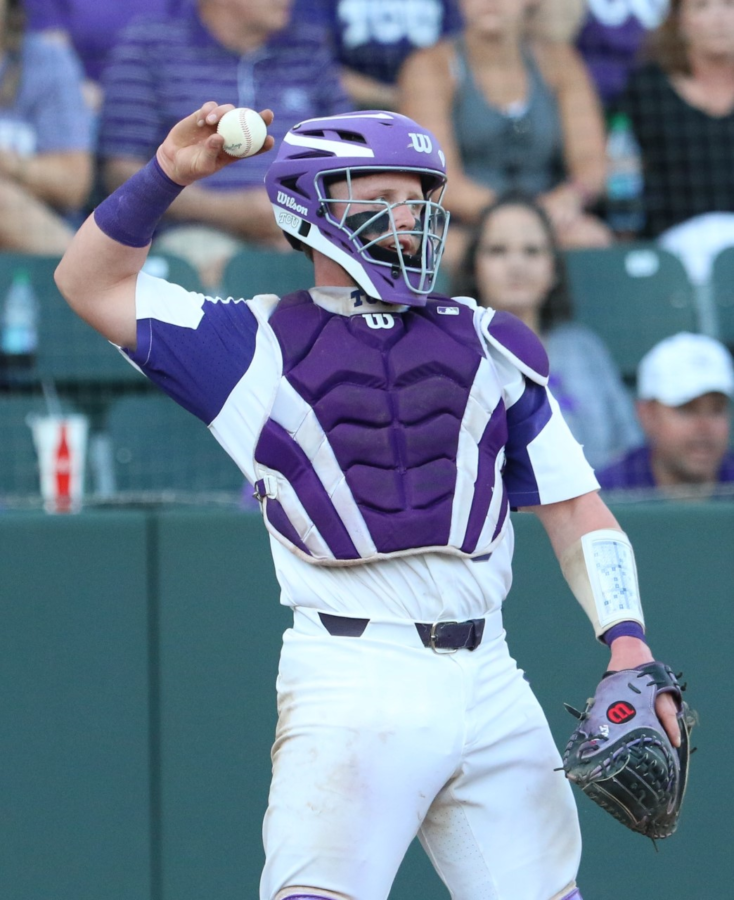 Evan Skoug put TCU one win away from a fourth straight trip to the College World Series with a two run home run in the eighth inning Saturday that gave the Horned Frogs a 3-2 lead and a game one win over Missouri State.

“Well, what an amazing college baseball game,” said TCU head coach Jim Schlossnagle. “That one will go down as one of the best ones ever played in this ballpark as far as I’m concerned.”

Down 2-1 with one runner on base and one out in the eighth, Missouri State brought in a left-hander from the bullpen to replace starter Dylan Coleman on the mound.

Skoug welcomed the new pitcher, Jordan Knutson, to the game by launching a 2-1 pitch over the right field fence to give TCU a one-run lead. The homer was Skoug’s 19th of the season, moving him to fifth all-time in both RBI’s and home runs in a career at TCU.

“Somebody asked me in the press conference yesterday if Evan had done enough to go down as one of the great TCU players,” Schlossnagle said. “He certainly had long before today, but he definitely put a stamp on that tonight.”

After struggling through the first month and a half of the season, Skoug has hit 15 long balls in his last 32 games.

“It is really hard to put that [home run] into words,” Skoug said. “I’m very fortunate and very thankful. That was one of the coolers things I have done in my life.”

Sean Wymer (5-4) earned the win out of the bullpen for the Frogs, as he entered in the seventh inning and picked up five key outs to bridge the gap between starter Jared Janczak and closer Durbin Feltman.

Feltman, the nation’s leader in saves, came on for the Frogs in the top of the ninth and allowed two runners to reach base but induced a 6-4-3 double play to pick up his 17th save. Feltman is now 26 of 29 on saves in his career and four out of four in postseason save opportunities.

Janczak (9-0) got the start for TCU, and he battled a dangerous Missouri State offense through 6.1 innings. Janczak gave up single runs in the second and fifth innings and left the game trailing 2-1.

After a dominant first inning that included two strikeouts, Janczak gave up a home run in the second to Jeremey Eierman. The solo shot was Eierman’s 23rd of the season of the season and the first that Janczak had surrendered in 2017.

TCU answered the home run in the bottom of the second with a two-out run-scoring single by Ryan Merrill. The hit scored Elliott Barzilli, who walked to open the inning and moved around to third on a wild pitch and a passed ball.

The Bears added a run on a safety squeeze in the fifth, but Janczak stranded two runners to escape the inning with minimal damage.

Coleman was lights-out for the Bears, as he fought through 132 pitches to go 7.1 innings while striking out 10. Coleman left with a 2-1 lead in the eighth, but his walk of Zach Humphreys set up Skoug with a runner on base for the game winner.

“Dylan Coleman for Missouri State was phenomenal,” Schlossnagle said. “He pitched outstanding, as good of a game that has been pitched on this field by a visiting team that I can remember.”

TCU and Missouri State will return to Lupton Stadium at 5 p.m. Sunday, with the Frogs needing a win to earn a trip to Omaha, and the Bears trying to force a game three on Monday. Both teams have yet to announce their starting pitchers.