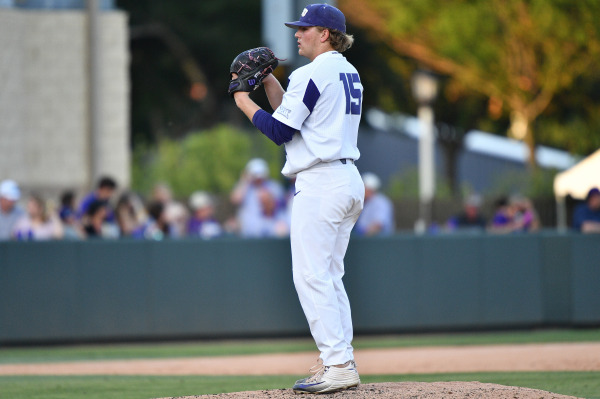 Durbin Feltman readies himself for the next pitch against Game 1 of the Super Regionals against Missouri State. (GoFrogs.com)

TCU closer Durbin Feltman leads the nation in saves and became the school record-holder for saves in a season with 17.

Yet, he feels there’s room for improvement.

“Not the year I wanted,” Feltman said. “I always feel like I could do better.”

Feltman closed out his first 18 save chances as a Horned Frog, nine as a freshman in 2016 and nine during his first games of the 2017 season. Trouble struck when he failed to finish an April 16 game at West Virginia. Six days later against Baylor, he allowed three runs in a non-save situation and was relieved. Feltman surrendered the tying run in the ninth inning against Texas May 5. A week later, Oklahoma hit a walk-off three-run home run against him in Norman.

It’s those three blown saves against the Mountaineers, Longhorns and Sooners that leaves Feltman wanting more.

“I’m not satisfied with it,” Feltman said after batting practice at the College World Series Friday. “I love being at the top save-wise, but I really just want to execute more quality pitches. I feel like that’s been kind of down this year.”

“Just the ability to get the slider in the strike zone and working,” Feltman said. “I had trouble with that at the beginning of the year, but now I’ve got it back.”

Since the three missed opportunities, he’s finished off five save situations, including one in the Big 12 tournament and two in the NCAA tournament.

A sophomore from Conroe, Texas, Feltman stands at No. 2 on TCU’s career saves list with 26, just six behind the 32 Riley Ferrell converted from 2013 to 2015.

“The more you get put out there, it’s going to happen sooner or later,” he said of the blowing saves. “I think it’s better that I did that early in the season, so once we get here, if it’s going to happen, I can learn from that. I’m glad it happened early in the season — I wish it had never happened at all, obviously. But I think it’s a good experience. I learned from that, learned how to come back, flush that, get rid of that.”

TCU’s first College World Series game in Omaha at TD Ameritrade Ballpark is set for Sunday night at 6 against the Florida Gators.