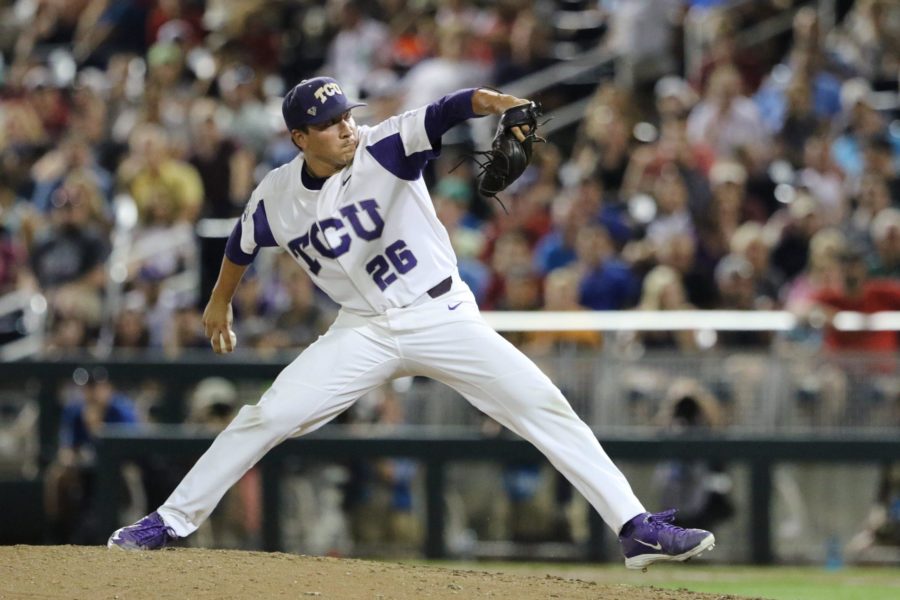 TCU reliever Sean Wymer pitches against Louisville in a 4-3 win in an elimination game. (Photo by Sam Bruton)

Horned Frog reliever Sean Wymer does it again for TCU, locking down the final 4.1 innings of a 4-3 elimination game triumph in the College World Series.

The Frogs eliminated the Louisville Cardinals and continue their season for at least another day as they now face Florida in another elimination game.

“Obviously the story tonight is Sean and how well he pitched out of the bullpen for us,” Schlossnagle said.

Wymer entered the game in the fifth inning with TCU leading Louisville by a run and needing to retire Dick Howser Trophy winner and the No. 4 overall pick in the 2017 MLB Draft Brendan McKay, with the tying run in scoring position and the go-ahead run at first base. He struck him out.

“His poise is like no other, and he’s at his best all the time,” right fielder Austen Wade said of Wymer. “He was dominant tonight, and it was fun playing behind him.”

McKay stepped up to the plate once again in the eighth inning with the tying run at first base. He had already crushed a home run off starter Nick Lodolo to deep right-center field. The Cardinals’ pinch runner Ryan Summers was picked off by Horned Frog catcher Evan Skoug, turning McKay into just the tying run, but Wymer put him away swinging on a 3-2 count to end the eighth, maintaining the one-run advantage. Wymer finished the game allowing just two hits and striking out five Cardinals on 57 pitches, earning the winning decision. He retired 12 of the 14 hitters that he faced.

“He just commanded the zone really well, and he could get ahead with pitcher’s pitches, strikes that hitters don’t want to swing at or just are well located and a hitter can’t pull the trigger on it,” Louisville first baseman Brendan McKay said of Wymer. “Then he coupled that with some great off-speed that had some good action, and he kept it down in the zone fairly well.”

TCU first baseman Connor Wanhanen, a teammate of Wymer’s at Flower Mound High School, said Wymer has taken his game to another level.

“He looks like a completely different guy out there, and just watching him out there, it’s like a machine at work,” Wanhanen said.

“In the fall Kirk dropped his arm angle just a little but, and that’s allowed him to command his fastball more,” Schlossnagle said. “He had a different breaking ball, it’s a curveball, shorter, tighter than the true overhand breaking ball that he used to throw, and his change has really come on in just the last three weeks.

With two outs in the bottom of the second, Bennett unraveled, and the Horned Frog lineup came to life. Third baseman Elliott Barzilli singled and then stole both second and third base. First baseman Connor Wanhanen doubled to drive in Barzilli, left fielder Josh Watson was hit by a pitch and then Watson and Wanhanen stole second and third respectively. Both runners scored on shortstop and Omaha native Ryan Merrill’s single, and Merrill advanced to second on the throw to home plate where Watson narrowly avoided Louisville catcher Colby Fitch’s glove, sneaking his hand underneath the tag to tap the corner of home plate.

The bottom half of TCU’s order, the catalyst for the big second inning, finished the game accounting for three of the Horned Frog’s four runs.

Wade, the TCU leadoff man, singled in Merrill from second to stretch the Horned Frog lead to 4-0 after the Cardinals replaced Bennett with reliever Adam Wolf.

“I got an opportunity to jump on a fastball, and I was able to stay on it and put together a good swing,” Wade said.

Schlossnagle said the key to the four runs that inning was his team’s base running.

“If we don’t steal those bases, then Merrill’s hit only scores one run instead of two,”  Schlossnagle said. “Base running for us is a huge part of our offense.”

With those four stolen bases, TCU tied the College World Series record for most stolen bases in one inning. Louisiana-Lafayette had four during the 5th inning against Clemson on June 14, 2000.

Lodolo would eventually run into trouble, surrendering a run in the third and leadoff home runs in the fourth and fifth innings. Reliever Cal Coughlin would enter the game in the fifth after Lodolo allowed the second Cardinal home run to center fielder Logan Taylor, and he would pitch two-thirds of a scoreless frame. Wymer took it from there. Lodolo finished with a no-decision after four innings of three-run baseball, allowing five hits, walking and striking out a batter on 58 pitches. Coughlin pitched a scoreless two-thirds of an inning, walking one batter on 11 pitches.

Up next for the Horned Frogs is a rematch with the Florida Gators Friday night. TCU will send senior right-hander Mitchell Traver to the mound. So far he’s pitching his best baseball of the season, allowing just three runs in his last three starts across 18.2 innings. Traver has struck out 21 batters and walked only four throughout that stretch.