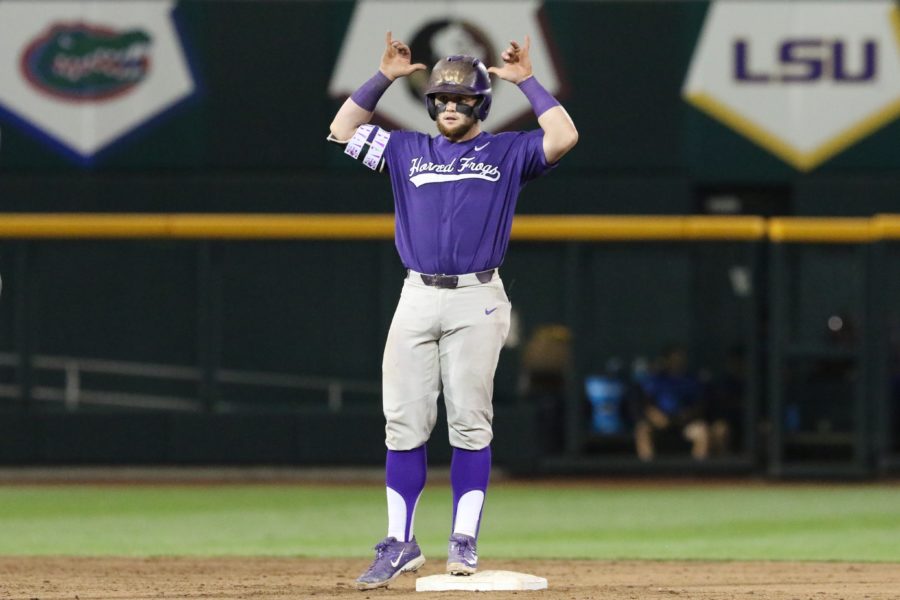 Evan Skoug celebrates his bases-clearing, three-run double in the sixth inning of a 9-2 victory over Florida. (Photo by Sam Bruton)

In what started as a pitcher’s duel early between TCU’s Mitchell Traver and Florida’s Jackson Kowar Friday night, ended in a Horned Frog blowout victory over the Florida Gators, 9-2.

“Certainly felt good about the way Mitchell started the game for us and Jackson on their side was beyond amazing,” TCU head coach Jim Schlossnagle said. “I started to think after he was punching us out there so much, has there ever been a 20-strikeout game in the World Series?”

After Kowar struck out the first two TCU batters of the third inning, Horned Frog shortstop and Omaha native Ryan Merrill extended his hitting streak to six with a single to right field. TCU then scored two runs on back-to-back doubles by right fielder Austen Wade and designated hitter Zach Humphreys to give TCU a two-run advantage.

After Traver struck out the first Gator in the bottom of the third, UF catcher Mike Rivera clubbed a towering home run to left field that cut the TCU lead in half, 2-1. Traver then had trouble shaking off the homer, walking the next two batters and surrendering another run on UF shortstop Dalton Guthrie’s deep double to left field that just missed leaving the ball park. Traver’s defense picked him up on that play, as left fielder Josh Watson threw out UF right fielder Ryan Larson after he overran the bag at third base.

The Horned Frogs then jumped back in front on a two-run triple by Watson, doubling the TCU lead to 4-2 in the top of the fourth. The triple was both Watson’s and the College World Series’ first of 2017. From there, the TCU bullpen shut down the Florida offense.

Schlossnagle turned to freshman reliever Charles King who entered the game with runners on first and second, and two outs in the bottom of the fourth. After he walked the first batter that he faced, King struck out UF center fielder Nick Horvath looking to put out the fire without allowing anyone to cross home plate. Traver left the game with two earned runs allowed, five strikeouts, and three walks on 82 pitches in 3.2 innings of work.  Kowar left the game surrendering four earned runs, a career-high 11 strikeouts on 94 pitches in five innings of work. Kowar was saddled with the loss, the first of his career.

The TCU offense blew the game open in the sixth, scoring four runs, three of them coming on a bases-clearing double to deep right field by All-American catcher Evan Skoug. That extra base hit tied the TCU catcher for the fourth-most RBIs, 71, in a single season for TCU. That is nine behind the all-time record of 80 set by Chris Connally in 1998.  Skoug is now also tied with Chad Huffman for fourth all-time with 168 career RBIs. The Horned Frogs would tack on one more insurance run in the eighth. Their nine runs scored Friday surpassed the number of runs scored through its first three games in Omaha, eight.

“I think the key to our offense here in this tournament in Omaha has been the bottom third of our line, and the ability to score at any time is big,” Schlossnagle said. “We felt like the going into the season that the strength of our team was going to be our offense.”

King earned the win after leaving the game in the eighth, pitching 3.1 innings of one-hit baseball, striking out five and walking just two on 58 pitches. King became the first pitcher to earn his first career win in a College World Series game since TCU’s Erik Miller achieved the feat as a sophomore in 2010. According to his catcher, King didn’t even have his best stuff Friday.

“He didn’t have his A stuff today because he can usually run the fastball at mid 90s,” Skoug said. “He made pitches when he needed to, got ground balls when he needed them and I think without having his best stuff he did an amazing job of competing.”

Relievers Dalton Brown and Trey Morris combined to finish off the game in the eighth and ninth innings respectively, totaling a couple of shutdown innings on two hits, one strikeout and no walks on 20 pitches. The TCU bullpen has not allowed a run to score in 21.2 consecutive innings of relief.

Up next, TCU will face Florida one more time for the opportunity to advance to the College World Series finals. It’ll be a rematch of aces: Alex Faedo will pitch for Florida, and Jared Janczak will take the mound for TCU. Faedo, the NCAA leader in strikeouts with 146, struck out 11 Horned Frogs en route to 3-0 Gator victory in the Frogs first game of this CWS. TCU relishes the chance to face him again.

“He put together an outstanding outing the first time he pitched against us, and we owe him one,” Skoug said. “We’re excited.”

This isn’t TCU first rodeo in terms of being one win away from the finals. The Horned Frogs were in Florida’s position last season, winning its first two games. This year, TCU is looking to follow in Coastal Carolina’s footsteps to climb out of the loser’s bracket and into the finals.

“The first two years we had a sore taste in our mouth because we haven’t been able to finish the deal, and I think that’s going to help us because it brings us to a sense of urgency,” Skoug said. “I don’t want another bad day in Omaha because you have to say goodbye to Brian Howard and Mitchell Traver, and that’s the worst thing ever.”

TCU will face off against Florida one more time at 7 Saturday night at TD Ameritrade Park.