Frogs poised to bounce back from down 2016 season 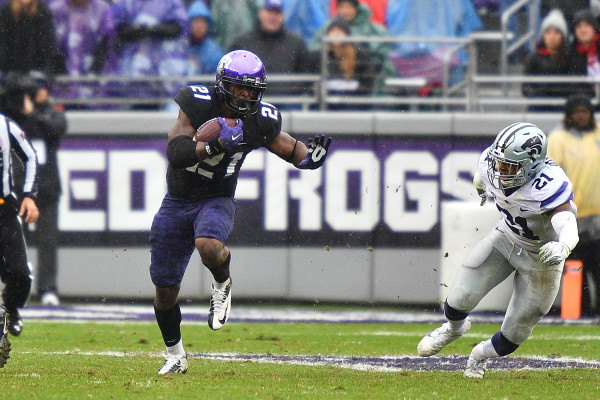 The Horned Frog football team is doing everything it can to distinguish itself from last season’s setbacks.

Coach Gary Patterson and players Ty Summers, Kyle Hicks, Travin Howard and Kenny Hill appeared at Big 12 Media Days on Monday to discuss plans for 2017, and it was clear the team is working hard to ensure this season yields better results than the last.

“We just really don’t want to let that happen again,” Summers said, referencing the disappointing 2016 year.”This offseason we have worked extremely hard in the weight room, and we have become more vocal and are keeping each other accountable.”

TCU had an impressive 4-1 record in true road games, dropping its only away game at West Virginia, but finished 2-5 in Fort Worth, winning one Big 12 game against Iowa State.

“Normally people have a harder time on the road, whereas we were the opposite,” Summers said. “In a way, that is kind of a positive thing because it shows that we are able to play on the road and be successful, but now we just need to translate that and block out distractions when we come play at home.”

The 2017 season will join 2005 and 2014 as the only years under Patterson that his team will be coming off a losing season. He said the focus in an offseason after a down year is getting back to what has worked in the past.

“Sometimes we lose our way a little bit,” Patterson said. “When you’ve been in a program for 20 years, 17 as a head coach, you understand the history of what we’re trying to get accomplished. So, doing the little things that sometimes you forget and you get away from.”

Keeping it in the family

To start, TCU needs its offense to rebound from a lackluster 2016 season. TCU’s yardage production dropped 100 yards per game from 2015 to 2016, while the point production slipped from 42.1 points to just 31 per game.

A lot of that can be contributed to the departure of star quarterback Trevone Boykin and all-time great receiver Josh Doctson at the end of the 2015 season. Hill struggled at times during his first year as quarterback at TCU, and his receivers dropped more passes than any other team in the country. The Frogs will have to rely on Hill and the receivers to find their groove.

Arguably the most impressive group on the team is the stable of running backs. Hicks returns as the headline back, but sophomores Sewo Olonilua and Darius Anderson showed promise in their first year and will provide crucial depth.

“Just having them behind me, I just know that if I do need a breather, that we have running backs that can come in and the momentum of the game won’t change,” Hicks said. “They’re also great playmakers, so I have a lot of trust in [Olonilua] and [Anderson].”

Hicks, a 2016 Honorable Mention All-Conference player and member of the preseason Watch List for the Maxwell Award, ran for more than 1,000 yards and 12 touchdowns and led the team with 46 receptions in his junior season. Olonilua had an 8.1 yard-per-carry average on 15 carries for 122 yards and one touchdown. Anderson ran for 232 yards on 27 carries, good for an 8.5 average, with his breakout game coming against Texas when he ran for 103 yards on just three carries, picking up his lone touchdown of the season.

The Frogs return their top 10 pass catchers from a year ago with Deante Gray being the only regular missing from last year’s team.

The potential problem with the retention rate is that this group of receivers saw a lot of criticism last year. The air raid offense under co-offensive coordinator Sonny Cumbie relies heavily on a quarterback that can sling the ball around the field and receivers that can go make plays.

Last year, TCU receivers combined for just 15 touchdowns, and none of them had 40 or more catches. Taj Williams was the team’s yardage leader with 702, while he and Jaelan Austin led the team with five touchdowns.

With the electricity of Shaun Nixon, Desmon White, Ty Slanina and KaVontae Turpin in the slot and the length and speed of outside receivers like Williams, Isaiah Graham, Josh Diarse and Emanuel Porter, this experienced group of receivers should provide Hill with the weapons needed to compete in Big 12 shootouts.

Nixon is a particularly interesting name to watch as he returns from an injury that caused him to miss the entire 2016 season. In his lone season playing for the Frogs in 2015, Nixon burst onto the scene with 47 receptions and 501 yards.

Also infused into the mix will be highly-touted freshmen Jalen Reagor and Omar Manning. Reagor is listed just shy of 6 feet, which makes him a candidate to see action as an inside receiver, while Manning’s 6-foot-2-inch frame will allow him to compete for snaps on the outside.

“It’s hard to say who is going to be a breakout talent,” Hicks said of the deep group of receivers. “There’s the stat that we led the nation in drops last year, and you can tell that all of them have been working really hard this whole offseason to make sure that doesn’t repeat itself.”

Kenny Hill’s plan for the 2017 season: ‘Be confident, play my game, help my team win’

The 2017 quarterback job lines up to be senior Kenny Hill’s – at least from the start, with newcomer Shawn Robinson breathing down his neck for playing time. Coach Gary Patterson said on Monday that there is still a chance there will be quarterback competition between the two once camp opens up at the end of July.

This year would be Hill’s second season as the starting signal caller for the Horned Frogs since transferring to Fort Worth from Texas A&M. Hill started the 2016 campaign hot, racking up more than 375 passing yards in four of the first five games for a total of 1,936 and 11 touchdowns. In his final eight games, Hill passed for just 1,272 yards, not once eclipsing the 250 yard mark, and six touchdowns. Overall, Hill threw for 3208 yards, 17 scores and 13 interceptions with a 61.1 completion percentage while rushing for 609 yards, top among Big 12 quarterbacks, and 10 touchdowns.

“For me, I think I’ve got to do a better job of helping him with his swagger,” Patterson said. “We’ve got to help him. We’ve got to catch the ball better. I think we are going to be better up front offensive line wise. We only lost one wide receiver, so I think all those things benefit him and then we’ve got to put him in an offense too that bends toward his strength.”

Hill said that returning nearly every receiver from a season ago will provide a confidence boost on Saturdays.

“On top of that, we are out there throwing every single day,” Hill said. “It’s all about getting that timing in and getting that continuity back together. Last year, we had a lot of drops, but I didn’t throw that great. We all knew what we needed to get better on and that’s all we have worked on this offseason.”

So where does that leave Hill heading into the 2017 season? He ran the ball well from start to finish and put up huge numbers early in the season through the air. Later in the year, he was benched against Texas Tech and did not even start against Kansas State.

His backups from last year, Foster Sawyer and Brennan Wooten, who redshirted last year, have since transferred to Stephen F. Austin and Tyler Junior College, respectively. That leaves junior Grayson Muehlstein and Robinson, neither of whom have thrown a pass in college football, to back up Hill.

Robinson comes in as one of the highest rated recruits in TCU history, picking the Horned Frogs over offers from Alabama, LSU, Ohio State, Michigan and Texas, among many others. Hill has worked with Robinson through the spring and summer to help groom him for the future, whenever that may be.

“[Robinson] looks really good,” Hill said. “He’s one of those guys that I try to take under my wing. I think he can be really, really good for TCU. He’s got all the talent in the world.”

But for now, Hill’s plan is simple.

“I just need to go out there, be confident, play my game, and help my team win,” Hill said. “Confidence comes with practice and work, so that’s what I have been doing.”

KaVontae Turpin back on track after academic issues

Turpin, a member of the 2017 Watch List for the Hornung Award – an honor given to the nation’s most versatile player – broke out in a big way during his freshman season in 2015, catching 45 balls for 649 yards and eight touchdowns, while being electric on both kick and punt returns. He started 2016 at a similar pace, picking up 16 receptions for 196 yards in just over two games, but an injury in week 3 against Iowa State caused him to miss the next four games. After returning from injury, Turpin caught only 14 passes for 101 yards.

Turpin ran into trouble off-field in the spring, when he missed practices due to academic issues, but Patterson said that he is currently back on track.

“He’s good, right now,” Patterson said. “They all have to grow up. One of the worst things that happens in this day and age is a young player is great as a freshman, because I think it’s really hard with the media and everything else for them to handle being invisible.”

Turpin was listed as a backup inside receiver behind senior Desmon White on the post-spring practice depth chart, but if Turpin can stay on track then he will surely make his impact felt.

“I think [Turpin] is doing the right things, understanding what it is to be a college athlete and a college student,” Patterson said. “We’re a lot better football team when he’s on the field doing some of the things like a lot of our guys have been. Right now, I’m excited that he’s back in purple and black.”

TCU opens up the 2017 season with a home game at Amon G. Carter stadium against Jackson State on Sept. 2 at 7 p.m.