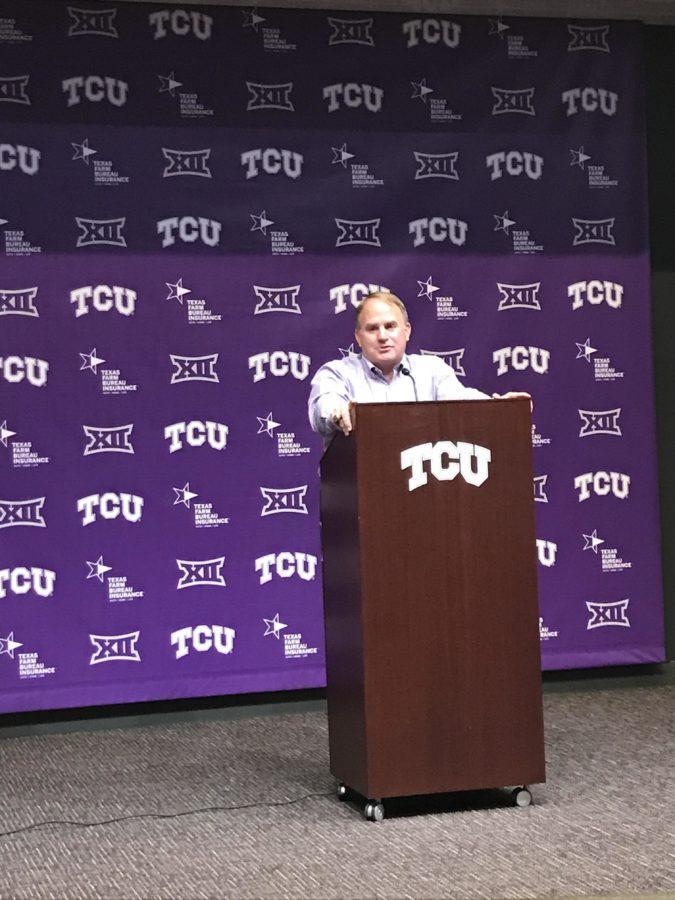 Football is in the air as TCU head coach Gary Patterson said that he was excited for preseason practice to begin and for some of the players who were injured last season to return. TCU brings back plenty of experience in 2017, tied for second nationally in returning starters, with seventeen of the twenty-two from a year ago set to come back.

Co-offensive coordinator Sonny Cumbie, who is taking over as the primary offensive play-caller, said that the team, returning ten of eleven starters on offense from a year ago, should benefit from the experience of the older players.

“You feel like you can work and focus more on the fundamentals and the techniques that will allow you to execute at a higher level than what you did previously,” Cumbie said.

Center Austin Schlottman, a watch list nominee for the Outland Trophy, said that the offense, especially the offensive line, would benefit from their past experience.

“It’s the same people from last year,” Schlottman said. “We know each other better and having better chemistry makes it easier, honestly.”

In addition to the older members of the team, TCU adds some fresh faces for 2017. This year’s freshman class includes quarterback Shawn Robinson, wide receivers Kenedy Snell, Omar Manning and Jalen Reagor and cornerback Noah Daniels, among others.

Patterson, Cumbie and co-offensive coordinator Curtis Luper all said that they won’t set any expectations for the freshman class until they see them in practice.

“Everyone has a game plan until they get hit in the mouth,” Luper said. “We won’t know what they can do- when they can help us- until Ben [defensive end Ben Banogu] hits one of them in the mouth. But we’ll know really fast if we can use those guys.”

Having a new group of freshmen gives older players the opportunity to step into leadership roles. Senior wide receiver Ty Slanina said that he sees himself as a mentor to the young receivers and that he hopes they come to him for advice.

Receiver John Diarse, who led the team with 442 receiving yards a year ago, said the most important thing for the freshmen to learn is that “it’s okay to be a sponge and gain information and ask questions.”

He said that he learned from older players at one time, and now wants to pass down his knowledge to his younger teammates.

Patterson said that guard Patrick Morris was one of the biggest vocal leaders of the spring and that there were others who he expected to step into leadership roles on the team. However, he said that fans often put too much stock in team leadership.

“I’ve had years where we went 11-2 and didn’t have any leadership,” Patterson said.

The Horned Frogs open their season at 7:00 p.m. on September 2nd against Jackson State in Amon G. Carter Stadium.