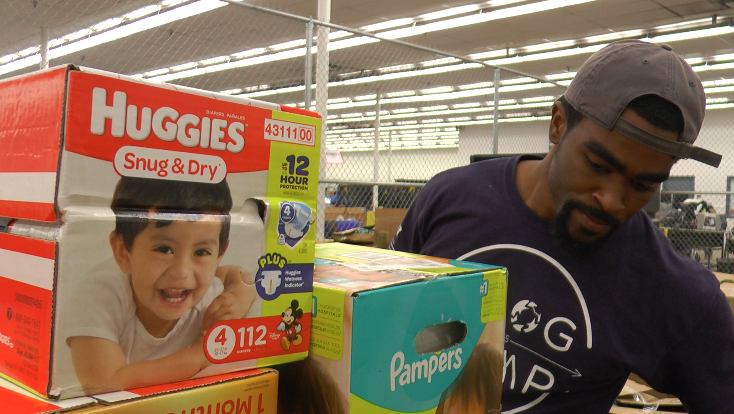 Brandion Victorian was one of several volunteers who helped sort and pack donations for South Texas evacuees. (Photo by Shane Battis.)

Hurricane Harvey left a trail of devastation after tearing through South Texas and forcing thousands of residents to flee their home as flood waters rose. TCU’s campus is 261 miles from Houston, but that hasn’t stopped students from helping their neighbors recover from the catastrophe.

Groups of students recruited by Student Development Services have volunteered at Goodwill Industries’ Fort Worth headquarters to expedite the process of relaying donations from donors to nearby shelters.

Two teams spent hours sifting through boxes of donated supplies like socks, underwear, toiletry items, feminine hygiene products, diapers and toys. Their mission was to sort the new items from used ones and wrap them into larger packages. These packages were then loaded into trucks and delivered to the Wilkerson-Greines Activity Center, which has been operating as an evacuee shelter under the Tarrant County Office of Emergency Management.

Shay Johnson, vice president of community engagement for Goodwill, said the volunteers have been a useful addition to the Harvey relief efforts by organizing the donations, so shelter staffs can get the donations to the right people quickly.

“TCU’s been great, along with a lot of other volunteers, taking the burden off of the shelters having to do that work,” Johnson said.

The Federal Emergency Management Agency reported that at least 37,000 people have taken refuge throughout Texas’ 270 shelters after floodwaters swept through 43 counties.

Hundreds of people, according to Johnson, have been bused to the Wilkerson Greines shelter from South Texas and many of them are relying on donated personal items.

Evacuating a home isn’t easy and Brandon Victorian, a senior electrical engineering major, knows this all too well.

His family had to flee their New Orleans home when Hurricane Katrina swept through his neighborhood in 2005. Victorian said they were gone for months before returning to a mostly flooded home and had to relocate to Monroe, Louisiana afterwards.

“I’ve seen it before and I know the devastation that it has,” Victorian said. “So seeing it [and] me being there, I get it and that’s definitely why I’m here right now – to give back to that.”

He also said what evacuated people need now more than anything is community. Being surrounded by compassion, he said, can make a big difference for people whose lives have been shaken by the hurricane.

“They’re coming here with nothing and have to start over and get new clothes and have to eat and have to get their toiletries and just every single thing we use in our day they don’t have,” she said.

In addition to volunteering, Sibille is also raising funds in her residence hall for people affected by Harvey. She said Milton Daniel Hall has already raised several hundred dollars.

“I’m glad TCU’s doing something about this,” she said. “It’s really cool that we can give back to and help Houston while we’re away.”

Students can still contribute to the Harvey relief efforts by checking TCU’s Hurricane Harvey relief website, emailing [email protected] for suggestions on how to help or sending donations through several local organizations.

Below is a directory highlighting a few organizations in Fort Worth working on Harvey relief.