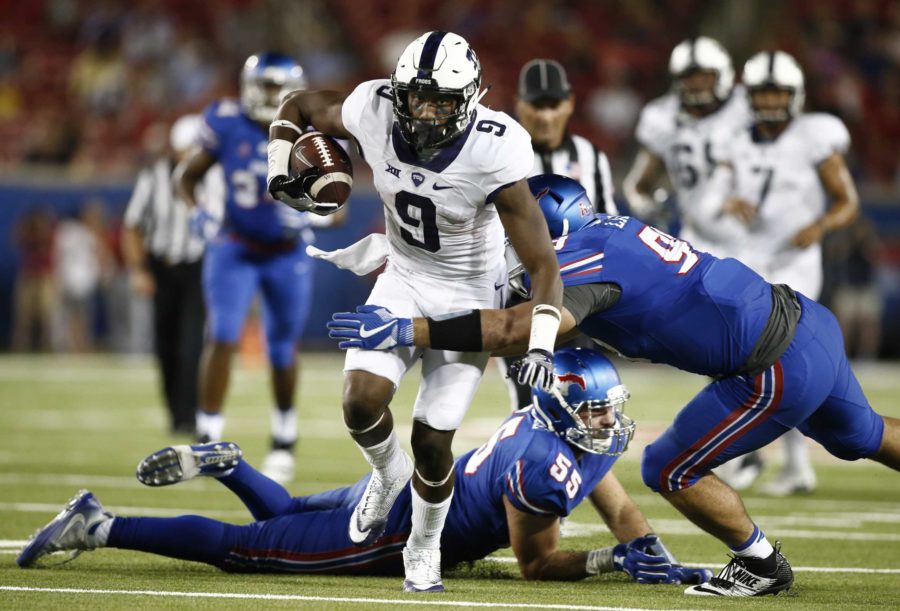 This time last year, senior wide receiver John Diarse was finding his footing as a Horned Frog graduate student after completing his bachelor’s degree at LSU.

“Coming in as a new guy, you just have to find your place, find your comfort level,” Diarse said. “But this year is very, very different for me mentality-wise, preparation-wise and the wisdom and advice that I give to the younger guys.”

Diarse stepped it up last spring after the Frogs finished with a 6-7 record and led the NCAA in dropped passes with 38.

One game into the new season, Diarse and the wide receivers had a successful game against Jackson State, not dropping a single pass.

“The other night was an exact testament of the hard work and effort put into the offseason individually and as a group,” Diarse said. “We harp on not making the same mistake twice, just going back and looking at film from last year and showing these guys our mistakes, owning them, and accepting them to show the guys hey, that’s not what you need to do. This is what I need to do and we’re going to do this as a group. It’s been great to see the guys take ownership and do their one-eleventh.”

Diarse wasn’t outspoken from the start, he grew into his role as a locker room leader.

“I believe it was time and confidence that I’ve worked and sacrificed, doing all the things I needed to do personally, and now, I stand in the place of being a vocal leader,” Diarse said. “As I’ve done that, I can feedback into the younger guys and say hey, this is the formula that I’ve used and everybody’s different, but there are some things you can take away to help lengthen your career and your path.”

“They did some really good things, but there were some screw-ups and you have to learn how to play every play because when you’re out there, you don’t just play the play where the ball is supposed to come to you, you have to play all of them,” Patterson said. “All young players have to learn that because you don’t know if it’s coming to you.”

In Diarse’s brief time as a Horned Frog, he’s earned a stamp of approval from Patterson.

“John is a very mature kid, graduated in three years and one class shy of completing his masters,” Patterson said. “He’s very mature, strong guy, has a lot of faith, will be successful in life. Any time you have a guy like John Diarse you’re going to have a great team member and one who’s going to be a great mentor to all the young player’s he’s around, so it’s a big positive.”