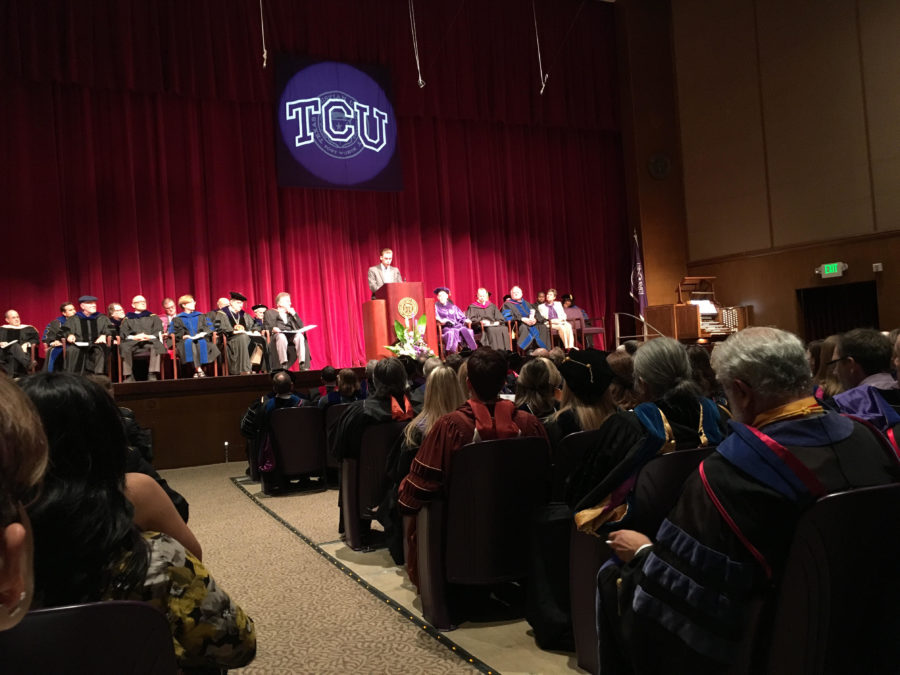 Boschini spoke in detail about TCU’s strategic planning initiative, Vision in Action, and how each person on campus has an important role in shaping TCU’s future.

Vision in Action is an ongoing university framework that has four main goals: to strengthen TCU’s academic profile, endowment, the TCU experience and culture and the workforce, of both TCU employees and graduates. Several faculty and staff members have been broken into committees to explore each issue and then present ideas to the Board of Trustees, Boschini said.

Boschini said that everyone on campus was a member of the Horned Frog family and that he had never worked or attended a school that has the spirit of TCU. He said all must join and lead on to continue improving TCU.

Part of this improvement, Boschini said, should focus on dealing with “all the hate” that seems to be going on in the world.

“Everyone feels slighted by every frickin’ thing,” Boschini said with a chuckle. “Help fight the anger.”

Boschini said he would be taking part in this himself by asking someone he “detests” on campus to lunch once a month and he encouraged others to do the same, adding that in his case this wouldn’t necessarily be someone he hated on a personal basis, but more someone with a different viewpoint than himself.

“I want you to make an attempt to please get along with them,” Boschini said. “It’s your duty to question everything around you, but to do it respectfully. I think that’s what we’re losing.”

In closing, he asked everyone to, “talk more with your ears and less from your mouth.”

Senior Ben Taylor, student government association president, spoke about TCU building on the momentum it has gained over the last several years – both literally and figuratively, joking that TCU stood for Texas Construction University.

Taylor said that the university was hurtling toward bigger and better things and that members of our community have “the responsibility to be exceptional in all that we do.”

Nominated by colleagues, both recipients have shown extraordinary achievement as creative teachers and scholars.

The last time there was a tie for the Chancellor’s Award was in 2005, according to Boschini.

Butler has been at TCU for 21 years. In his acceptance speech, Butler thanked his wife for pushing him to come to TCU and said “coming to TCU was the best thing I ever did.”

Riddlesperger has been at TCU for 36 years and thanked his wife and his colleagues in his acceptance speech. Both winners will receive a $25,000 cash prize.

Editor’s Note: This story has been updated to clarify the Chancellor’s word choice.