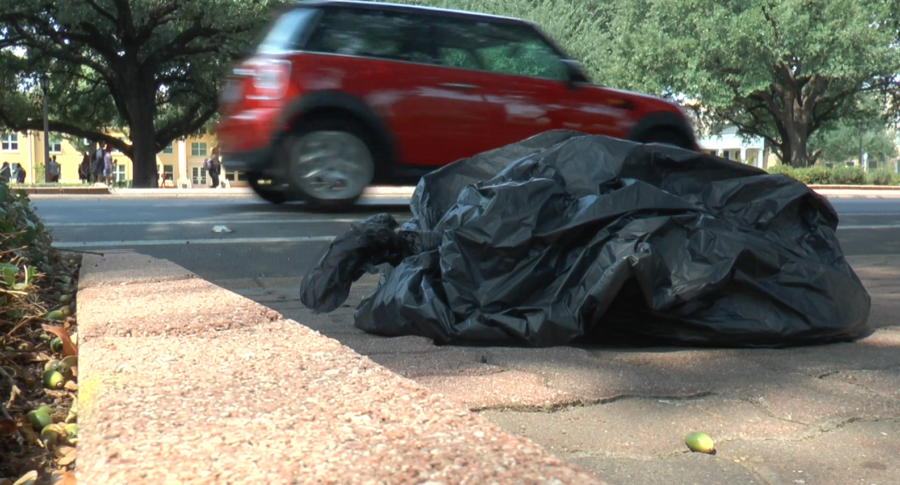 Cars drive by a discarded trash bag on University Drive.

A new Texas littering law may cause tailgaters to think twice before they leave their trash behind around campus.

House Bill 1884, which went into effect Sept. 1, allows judges to sentence anyone caught and convicted of littering to as many as 60 hours of community service, specifically picking up trash or working at a local recycling center.

With football season in swing, the law could affect many of those students who live in off-campus houses and host tailgates for often hundreds of fellow students – all in one back yard.

“To a certain extent, especially when you have a couple hundred people, we can’t be watching every person at the same time, while also trying to enjoy ourselves as well,” said Junior Andrew Slate, an off-campus tailgate host. “I don’t think we’re responsible for each individual piece of trash that gets dropped somewhere.”

Slate says that he’s afraid the law could be used as an additional punishment by police officers arriving to break up a party.

However, according to Lieutenant Ramiro Abad of the TCU Police Department, littering isn’t at the top of the list when it comes to a responding officer’s judgment. Abad said police are usually responding to noise complaints rather than excessive trash, but might decide to ticket the offenders based on the situation.

“It’s a good law,” Abad said. “Hopefully it will curtail some of the activity from some of the party houses that are around campus.”

He added that the new law could also be used as an extra enforcer for repeat offenders or those who don’t cooperate with officers.

“There’s times that I know where people have been cited for littering because they are acting either ignorant, dumb or stupid, like throwing their cups in the neighbor’s yard who complained,” said Abad. “It’s not just because they want to write more tickets, it’s when there’s no compliance.”

Receiving a littering ticket doesn’t automatically mean the guilty party is picking up trash on the side of the road. Rather, the law lets the judge of the case decide whether to assign community service to those convicted – on top of the fines and penalties already in place.

Abad said another problem with tailgating is how large amounts of trash are disposed of after being cleaned up.

Section 365.012 of the Health and Safety Code for Texas states that a person commits an offense if the person disposes of, allows or permits the disposal of litter or other solid waste at a place that is not an approved solid waste site. This includes places on or within 300 feet of a public highway, on a right-of-way, on other public or private property, or into inland or coastal water of the state.

For example, dumping trash in private property dumpsters, like the local Kroger or CVS, is illegal and could result in a ticket.

Private businesses can call in their complaints to Fort Worth’s Code Compliance Department, who ensures property complies with rules set by City Council, if they see people using their private dumpsters or if they find an overflow of trash that doesn’t belong to them.

While TCU Police can’t issue tickets off-campus, Abad says they do receive the complaints from both Code Compliance and citizens, and they help with the investigation if needed.

In fact, Abad said Code Compliance is known to take drastic measures when it comes to complaints about illegal dumping.

“They’ll go through the trash that’s placed in the dumpsters to see if somebody’s name or information is in there so they can tie it to where it came from,” said Abad. “The bottom line is: don’t throw it where it doesn’t belong.”

For students looking for a place to toss their trash, there are free drop-off stations as part of the “Still Littering – Seriously?” anti-litter campaign. The closest station is located on 6260 Old Hemphill Road. For those who attend on campus tailgates in the TCU parking lots, TCU’s grounds crew cleans up the trash during the game.