TCU grinds out a win against SMU to retain the Iron Skillet, 56-36 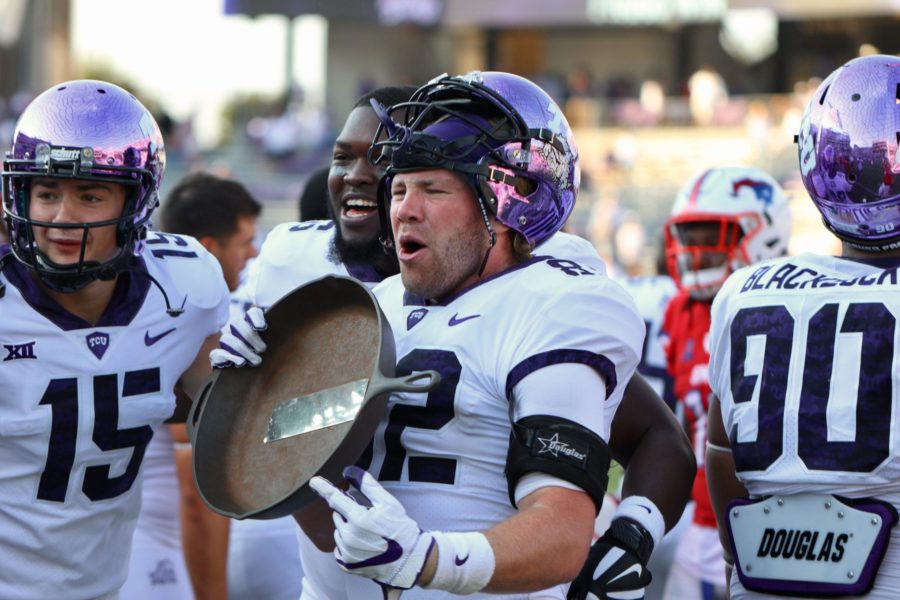 The Horned Frog win wasn’t pretty Saturday afternoon against SMU, but they did more than enough to keep the Iron Skillet in Fort Worth, 56-36.

“We scored 56 points, but we didn’t play that well, we had some penalties and turnovers,” TCU head coach Gary Patterson said. “We did what we needed to do since we were the bigger, more physical team and had more experience. It should’ve been 80.”

Across the board, Patterson said TCU’s mental preparation wasn’t good enough this week.

“I don’t think there was an attention to detail that there needed to be,” Patterson said.

It showed on the opening drive of the game when SMU started on offense and the Mustangs executed a flea-flicker pass for a 58-yard touchdown.

“They had two trick plays, but the funny thing is we worked on both of them,” Patterson said. “Anything that goes fast that way, stand on the other side of the center and wait for it to come back.”

TCU defensive end Ben Banogu admitted that the defense wasn’t completely dialed in on a day in which it allowed the Mustangs to total 36 points on 463 yards.

“We got the win, and it is always good when we come out with the victory, but I feel like our defense came out not as mentally ready for the game,” Banogu said. “If we could pay attention to the little stuff and pay more attention to detail, we can find ourselves in a place where we wanna be, but today wasn’t very good.”

However, it wasn’t all negative for the Horned Frog defense. They accomplished their goal of limiting SMU’s All-American wide receiver Courtland Sutton who had one catch for no yards.

TCU also played stout red zone defense, limiting the Mustangs once they got within striking distance of the end zone, as they forced three red-zone field goals.

“I’m proud of the defense again, we played well in the red zone,” Patterson said. “We had three times down there and they kicked two or three field goals. If we can do that in the Big 12, then we have a chance for a lot of success, but you have to get lined up right.”

Linebacker Travin Howard returned an interception for a touchdown, and after SMU quarterback Ben Hicks completed his first five passes he looked off-balance the rest of the game, going 12-for-32.

Going forward, the defense will need to get off to a faster start, unlike Saturday when TCU trailed 19-7. With better preparation, the Horned Frogs believe improvement will occur.

“Starting fast is just preparation,” Banogu said. “Coach P and the staff gave us a good game plan this week, we just didn’t come out ready to play. Honestly, we got punched in the mouth a little bit in the first quarter and we got tricked a little with the trick plays and stuff, but if we can get more focused and be more aware of what’s going on, we will be okay.”

On offense, Patterson liked what he saw, but it could’ve been better.

Hill increased his completion percentage to 75 percent on the season after completing all but six of his 30 passes against the Mustangs Saturday.

“I thought I did pretty good, but there are some things I need to clean up,” Hill said. “I missed some throws, had a couple poor reads, but overall I thought it was a pretty good game.”

One of the few detractors from Hill’s performance was the three sacks.

“I know two of them for sure I was just trying to do too much,” Hill said. “I need to throw the ball away or do something because I can’t keep getting sacked like that.”

The Horned Frogs also had two fumbles, one on a pass behind the line of scrimmage to KaVontae Turpin and another when Reagor ran across the formation as the ball was snapped.

The team now looks ahead to Oklahoma State.

“Our guys expect to play a lot better [next week],” Patterson said. “We’ve played these guys before, we had the same guys a year ago, and it was 10-6 at halftime last year. This year, we’re a lot better up front.”

A week from Saturday, TCU will face off against Oklahoma State in Stillwater at 2:30 p.m.