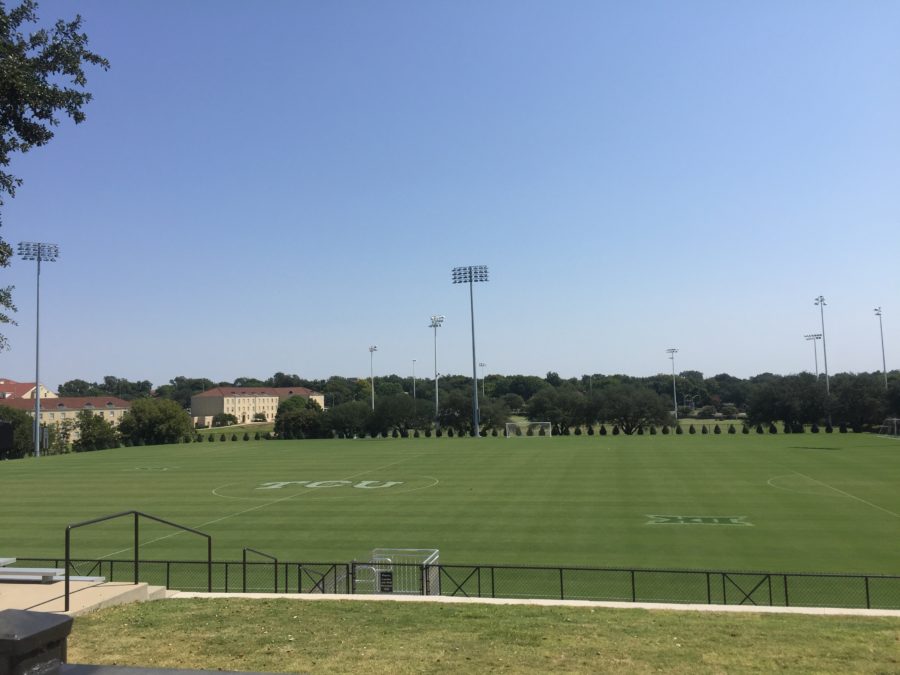 Soccer stadium in the middle of the day

The Garvey-Rosenthal Soccer Stadium received a makeover this summer after years of the Horned Frogs playing on an uneven field – literally.

The problem started because of the field used to be the Old Worth Hills Municipal Golf Course owned by Justin Boot Co. John Justin, manager of the company, and TCU agreed to a deal that allowed them to acquire the golf course in exchange for some land TCU owned on the west part of Fort Worth. The golf course had covered the TCU Greek area and the current soccer stadium.

Once the deal was done, TCU added all the essentials: a press box, restrooms and stands, turning the golf course into a soccer field. Ross Bailey, the associate director of athletics, said in the process of making the field, the ground looked level.

He added that over time, they realized that something was off about the field.

“A few years ago, we figured out that the south end of the field was some four or five feet higher than the north end,” Bailey said. “It was hard to see with the naked eye.”

He revealed that this was one of the major reasons for the renewing of the field. With the addition of the new field, TCU also made some unique changes to the grass.

“The grass is called Tiff Tuff from a strain of Bermuda grass,” said Bailey. “And is grown in Granbury, Texas. It is meant to withstand the wear and tear of play and be more resilient to the salinity of Fort Worth’s water.”

Head coach Eric Bell said the field is “better” for the athletes and is a possible factor in their great record at home this season.

In addition to the field and grass, TCU added lights that now meet NCAA regulations for televised games.

TCU declined to answer questions pertaining to the financial aspects of the field.