TCU baseball focuses on values of ‘selfless, excellence and energy’ 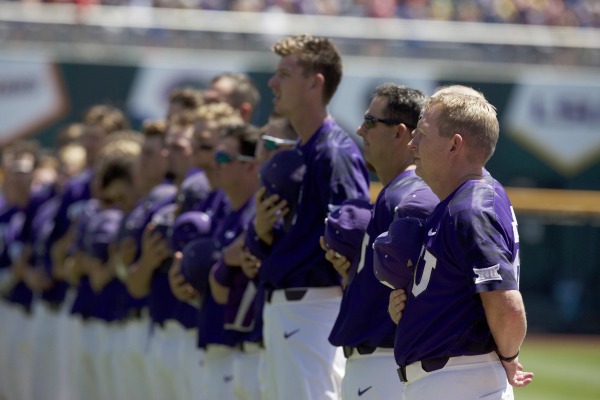 When the TCU baseball team got ready to take the field for its first fall practice this week, coach Jim Schlossnagle said preserving program culture was more important than starting preparation for a team run at a fifth straight College World Series.

Last fall, the Horned Frogs had very little roster turnover and most of the focus was directed toward the field improvement and managing lofty expectations. This fall, everything is different.

“The stuff that is on my plate is to make sure the culture remains the same and that guys know how to do things, know where to go, how to act and what to do,” Schlossnagle said. “I certainly have some help with that with an awesome three or four core group of older players.”

The core leaders, who Schlossnagle mentioned are Connor Wanhanen, Luken Baker, Jared Janczak and Michael Landestoy, have stepped up in a big way through the summer as the new players arrived on campus, but becoming a leader does not happen on accident.

“We had those conversations within a week of coming back from Omaha last year,” Schlossnagle said. “We do some cool things. I take them all to dinner right when school starts, and we hammer some things out. There aren’t as many [leaders] this year, but there doesn’t have to be as many. You just have to have the right ones.”

Wanhanen, a senior who played first base the majority of last season but will play outfield exclusively this fall, has embraced his role as leader.

“I’ve seen changes in a lot of guys already,” Wanhanen said. “From high school to college is the biggest jump you are ever going to make in your baseball career, and there will be ups and downs for sure. As an older group, we are showing them right from wrong, saying ‘this is the path, this is how we are going to get to where we want to get to. You just have to trust us.'”

Janczak, a fourth-year junior who started in the bullpen before working his way to ace of the pitching staff, has tried to push the program’s core values of selfless, excellence and energy to the new players.

“Selfless: Life’s not about you, it is about your teammates, family and close friends. Excellence: Strive to get better every day in your life, no matter what it is. Energy: Bring positive, relentless energy to the field every day, or in academics or in the weight room,” Janczak said. “That’s what we try to instill in them, and then they can keep the culture breeding.

With such a small group of veterans returning from a team that lost eight seniors and two drafted juniors, the constant flow of alumni returning to Fort Worth provides an extra voice for the young players to listen to.

“If for some reason they are not listening to what we say,” Wanhanen said, “We tell them, ‘okay listen to what Brian Howard says, listen to what Austen Wade or Ryan Merrill or Cam Warner says.’ They will say the exact same thing, so it is definitely awesome to have them reinforce everything that we are saying.”

Schlossnagle echoed Wanhanen’s assessment of the value of having former players return to campus to help guide the newcomers.

“I’m sure I’ll pick a time where I will have maybe Brian Howard or Mitchell Traver come back and visit with the new guys and give them a player perspective,” Schlossnagle said. “Those guys are living, breathing testimonies to what we want to be about.”

The time will come when baseball moves to the forefront, but for now, the young players must find their way.

“They are all great kids, and we are excited to have them here,” Wanhanen said. “It’s going to be nice to see how they compete and fit in with our culture and how we do things here.”