No. 6 TCU is no longer an underdog 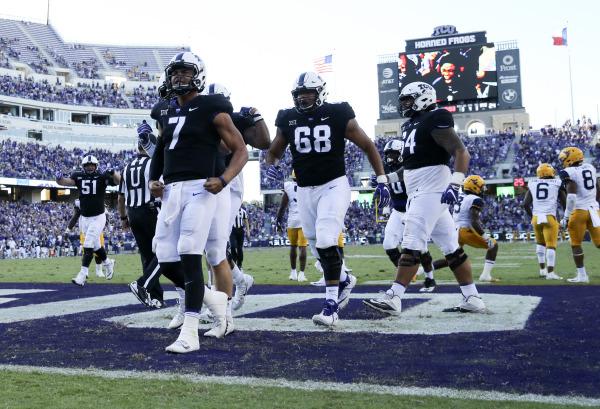 When football season started, expectations for the Horned Frogs were limited at best. But going into Manhattan, Kansas to face the Wildcats Saturday, TCU is ranked No. 6 and is the only undefeated team left in the Big 12.

The Frogs are expecting a physical game Saturday. Known for running the ball, Kansas State doesn’t play the up tempo, no-huddle spread offense that is common in the Big 12.

“They’re a tough-nosed team,” said TCU quarterback Kenny Hill. “They have a lot of walk-on kids from that area who were overlooked and they come in with a chip on their shoulder ready to go, so they play really hard and don’t ever stop.”

But after a losing season and a collapse in the AutoZone Liberty Bowl against Georgia last year, TCU has had a lot to prove this season, too.

“I already knew we were going to be better when we walked off the field against Georgia in the bowl game because their coach [Kirby Smart] said I’m glad I played you now,” TCU head coach Gary Patterson said. “We gave them a fight, and they have some good players.”

Patterson and the Frogs spent the offseason fine-tuning both sides of the ball.

Experience has bolstered the defense, as eight of TCU’s eleven starters are upperclassmen.

The defense has held three of the top offenses in the country — SMU, Oklahoma State and West Virginia —  forcing eight turnovers, allowing five touchdowns in 11 red-zone trips and 91 points. The Frogs have 11 takeaways so far this season, compared with 16 for all of last season.

They’re leading the conference in sacks with 13, which have come from seven different players. Junior defensive end Ben Banogu, a transfer from Louisiana Monroe, has four of those sacks.

“He’s had a great impact: great pass rusher, great physicality coming off and setting the edge,” TCU defensive tackle Chris Bradley said. “He does his job, he knows the defense well, we’re able to flow together as one, so it’s been amazing to watch.”

Banogu is on the Watch List for the Chuck Bednarik Award, which goes to the best defensive player. He has team-high totals of seven tackles for loss. He also has two forced fumbles, which pace the Frogs.

Facing the defense in practice has sharpened TCU’s offensive play too.

“The defense makes it tough on us and they really make it hard on us, which makes us better,” Hill said.

The offense, the nation’s best on third-down, scored 131 points, rushing for 662 yards and nine touchdowns in the last three games.

Hill is 15-of-23 for 194 yards, three touchdowns and no interceptions on third down. His overall completion percentage of 69 percent ranks 10th in the nation. He’s on pace to surpass Casey Pachall’s school record of 66.5 percent.

Hill credits a couple factors in TCU’s offensive uptick: Facing Patterson’s stout defense that allows the fewest points per game, 19.6 in the Big 12, and the running back rotation that gives Hill plenty of options.

The trio of Darius Anderson, Kyle Hicks and Sewo Oloniliua have teamed up to power the Big 12’s top running attack.

The Horned Frogs return to action Saturday, Oct. 14 in Manhattan, Kansas against the Kansas State Wildcats. Kickoff is set for 11 a.m.