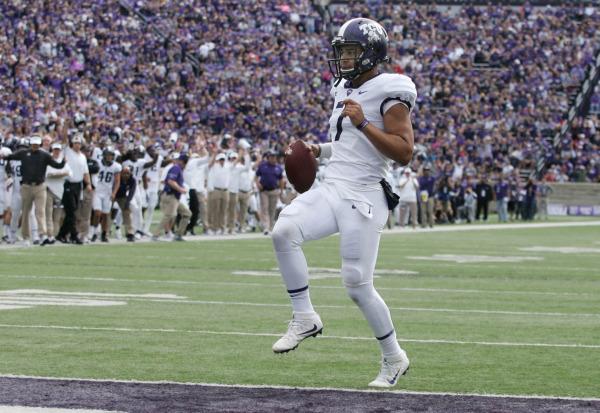 TCU quarterback Kenny Hill jogs into the end zone to give the Horned Frogs a 7-0 lead over Kansas State. Photo courtesy of GoFrogs.com

TCU’s showdown with Kansas is set for a 7 p.m. kickoff on Fox, an unusual twist: a primetime national television spot for a matchup of an undefeated team facing an opponent that’s lost five straight.

ABC’s primetime matchup features No. 2 Penn State and No. 19 Michigan. NBC’s has No. 11 Southern California paying No. 13 Notre Dame a visit.

No matter, the Horned Frogs are happy to be on national TV.

“A night game in the Carter is going to be fun because the fans really come out,” said wide receiver Desmon White.

“The fans are more in tune with it because no one likes sitting out in the heat, those 11 and 2:30 games can be brutal,” defensive end Ben Banogu said. “It’s a nice change of pace.”

Banogu said the late kickoff will be an adjustment.

“I get done at about twelve o’clock at night and turn around to be up the next morning at 9 o’clock in the morning, so I would rather play at 11 or 2:30, so you can actually get two or three hours of being a real human being,” Patterson said.

Kansas’ record sits at 1-5, but Patterson said that’s why his team should get fired up to face the Jayhawks.

“You should get up for the games people think you’re supposed to win and let the big games take care of themselves because if you want to win games in succession, that’s the way you have to do it,” Patterson said.