Expectations are clear for men’s basketball: NCAA Tournament or bust 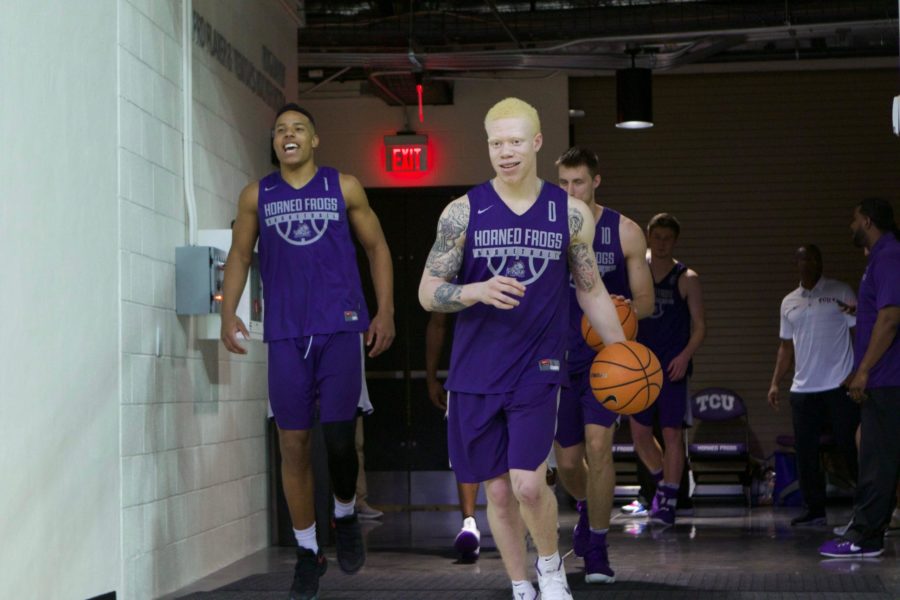 Jaylen Fisher (0) and Desmond Bane (1) lead the Purple out onto the court. Photo by Carolina Olivares

TCU basketball head coach Jamie Dixon has a simple goal for the Horned Frogs – a bid to the NCAA Tournament.

The blueprint for Dixon’s second season in Fort Worth includes the return of last season’s starters: senior forward Vladimir Brodziansky, junior forward JD Miller, guard Kenrich Williams, guard Alex Robinson and guard Jaylen Fisher. The addition of 6’7, 210 pound redshirt freshman Kouat Noi to its frontcourt and improved on the wings with freshman guard RJ Nembhard from Keller High School. And, finally, the team is healthy and older players are stepping up as leaders.

“We have some good leadership in Kenrich and Vlad,” Dixon said. Adding that they know, “how to win big games against good people.”

Dixon is glad Fisher is back – he missed the NIT with a wrist injury and the summer Australia trip with a knee injury.

“He’s the fastest guy on our team, and he’s a relentless worker so we feel good about him,” Dixon said.

Noi, who’s from Australia, gives the Horned Frogs not only another big body who can score down low, but also another shooter with three-point range, which has led teammates to compare him to NIT MVP Williams.

“My role is to stretch the floor, run, rebound with my long wingspan and be out there on defense to help out the team,” Noi said. “Being able to do that this season and help the team out will be great.”

In addition to Noi, the Horned Frogs also improved their depth on the wings with freshman guard RJ Nembhard, who was a four-star recruit, from Keller High School.

Dixon tapped into the transfer market in the offseason as well, bringing in junior guard Shawn Olden from New Mexico Junior College and senior forward Ahmed Hamdy. Olden averaged 16.6 points while shooting 36.6 percent from the 3-point, so he’ll add spacing to the Horned Frog offense, and Hamdy adds to the collection of physical big men Dixon has with his 6’10, 235-pound frame.

With the influx of talent, Dixon said he doubts his starting lineup will look the same every night because he plans to use different combinations, depending on the opposition’s strengths and weaknesses with the depth of his 10-man rotation.

The Frogs are picked to finish third in the Big 12 preseason poll – last season they were tapped to finish last.

“It’s a lot different, coming in last year as the underdog, nobody on you to do anything and you surprise everybody and this year we have the target on our back,” Bane said. “We’re still working hard, still have that chip on our shoulder though.”

That chip stems from the program’s history, as the team is looking to return to March Madness for the first time since 1998.

When TCU begins its season Friday night against Louisiana Monroe, Dixon said defense will be what he emphasizes early and often.

“How we guard and how we respond is what we’ll look at,” Dixon said. “I want to see us guarding different guys: drivers, especially post guys who can score on the block because we’re not stopping Vlad right now, but he’s pretty good, so we have to see how we can guard different looks going forward.”

The Horned Frogs tip off in the Ed and Rae Schollmaier Arena at 8 p.m. Friday against Louisiana Monroe.