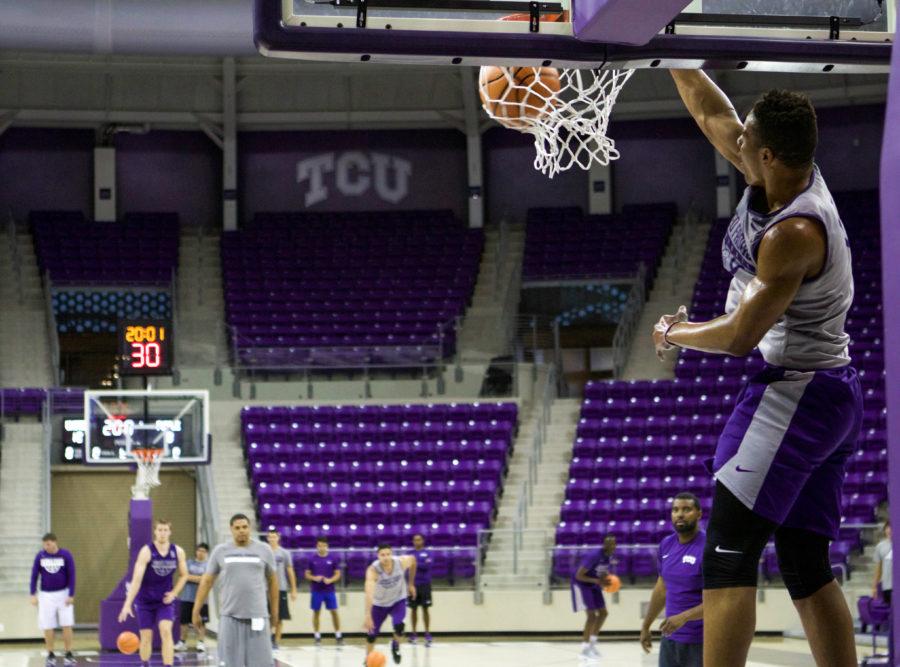 TCU guard Desmond Bane soared to new heights, scoring a career-high 24 points on 9-13 shooting, making a career-high six three-pointers, and helping the Horned Frogs crusie to a 100-63 victory over Tennessee Tech to improve to 2-0 Monday at Schollmaier Arena.

“It’s a credit to my teammates because they happened to find me when I was open tonight and I was able to knock them down,” Bane said. “You have to be ready to step up and knock it down, and tonight just happened to be my night.”

Bane matched his previous career-high of 19 before halftime, and his six three-pointers were the most three-pointers in a game by a TCU player since Hank Thorns hit eight threes against UNLV Feb. 14, 2012.

“Desmond’s good, and what is good about him is how much he’s improved from last year to this year: I think the USA basketball thing was a big confidence-booster,” Dixon said. “He’s so much better off the dribble, and our guys have so much confidence in him. We thought he was going to be a good player, but I think he’s certainly elevated himself to beyond that.”

Bane said his new role has played a part in his development as well.
“Last year, Jaylen [Fisher] happened to go down, I was asked to step up into a starting role, which was big for me,” Bane said.
The starting lineup of Bane, Alex Robinson, Kenrich Williams, JD Miller, and Vladimir Brodziansky is now 6-0, with the first four of those wins coming in the NIT last season.
Every Horned Frog seemed to have a great night Monday as all 12 TCU players who dressed for the game logged minutes, including senior forward Clayton Crawford who made his collegiate basketball debut. TCU guard Dalton Dry broke his career high in points with six, as the Horned Frogs hit 100 points for the first time since scoring 106 against Mississippi State Nov. 24, 2014.
“We think we space the floor, and a lot of those things are passing and ball screens, it’s not just one guy,” Dixon said. “It was good to see these guys make some shots.”

However, Dixon said his team can’t rely on this kind of offensive output regularly.

“We have to be a team to where if the shots aren’t going in we’ve got to be good in other areas and win the games with defense,” Dixon said. “Defense and rebounding has to be the constant: we’re not quite there believing in that, but we need to get there.”

TCU continues a stretch where it plays three games in five days when it hosts South Dakota Wednesday, Nov. 15 at 8 p.m.