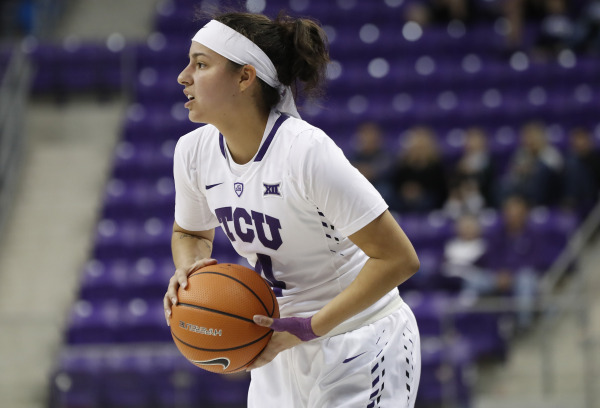 TCU Women’s Basketball defeated the Arizona Wildcats 68-59 Friday night in the opening round of the Warner Center Marriott Thanksgiving Classic.

The Horned Frogs got an all-around game from sophomore transfer Jayde Woods, who had 12 points, seven rebounds, and seven assists in her first appearance of the season.

Woods, who transferred to TCU in the spring and was sitting out until January, was ruled immediately eligible by the NCAA prior to the game thanks to a waiver submitted by TCU.  Woods transferred from Oregon and enrolled at TCU in January.

The Horned Frogs’ 16-point halftime lead was their largest of the season thanks to a defense that only allowed five points in the second quarter. The Wildcats shot just 24 percent from the field in the first half.

Arizona made their run in the third quarter, outscoring the Horned Frogs by 14, 25-11, and eventually took their first lead of the game at the start of the fourth quarter.

However, TCU pushed right back in the final period, scoring on three consecutive possessions while forcing back to back Wildcat turnovers on the other end to take a seven-point lead with under a minute left.

The Horned Frogs were perfect from the free throw line in the final three minutes of the game, 8-8, ultimately ending on a 12-2 run to win by nine points.

“I’m really happy with how we played that first half and also how we managed their push back,” TCU head coach Raegan Pebley said. “But we needed to do a better job in how we came out in that third quarter.”

The win was the team’s first over a non-conference Power Five opponent since January of 2011, dating back to the Horned Frogs days as a member of the Mountain West.

TCU will face the winner of Idaho and California State University Northridge in the tournament championship Saturday at 9:30.