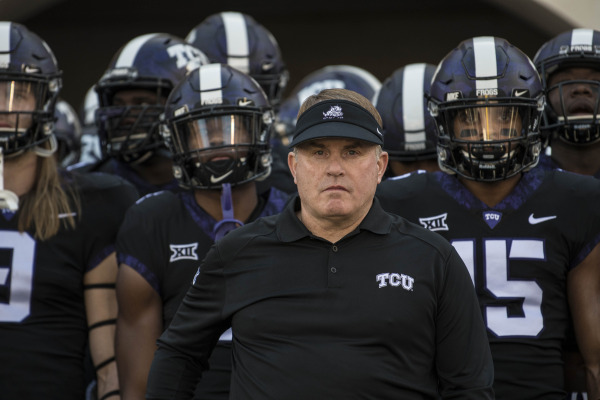 TCU head coach Gary Patterson leads his team onto the field for Senior Day against Baylor. Photo courtesy of GoFrogs.com

After clinching a spot in the Big 12 Championship game with a win on Senior Day over Baylor, 45-22, TCU head coach Gary Patterson let everyone know he’s not going anywhere.

“That way recruiting-wise and everything else, everybody understands where Gary Patterson is and what we stand for and what we’re trying to get done at TCU,” Patterson said.

Patterson became the head coach at TCU in 2000 after he was an assistant with the program for three years. Patterson has a 159-56 record at TCU and has led the school’s migration across four different conferences: the Western Athletic Conference (2000), Conference USA (2001-2004), Mountain West Conference (2005-11) and the Big 12 (2012-present).

The 57-year-old has become the program’s winningest coach with a 159-56 record after Saturday’s win over Baylor. He took over the Horned Frogs in late 2000 after nearly two decades working as a defensive assistant for various collegiate programs, including three years as TCU’s defensive coordinator before taking over the top spot from Dennis Franchione.

Patterson said in past interviews that he has no interest in coaching nearly as long as his contemporary at Kansas State Bill Snyder or much past retirement age.

“We’re very grateful to Mr. Del Conte and our chancellor and our board of trustees, Kelsey and I are, for having confidence in us to be here a little while longer,” Patterson said.

Patterson said he signed the new deal the Wednesday before Thanksgiving.

“Not soon enough!” Del Conte exclaimed in the postgame interview room, eliciting a smile from his head coach.

“I dragged my feet a little bit,” Patterson said. “It’s kind of like recruiting. Or when you’re dating. If in dating you act like you like her too much, then she doesn’t want anything to do with you, right? You’ve got to act like, ‘I don’t know…’ But they do take very good care of us. Let me just say that to you.”