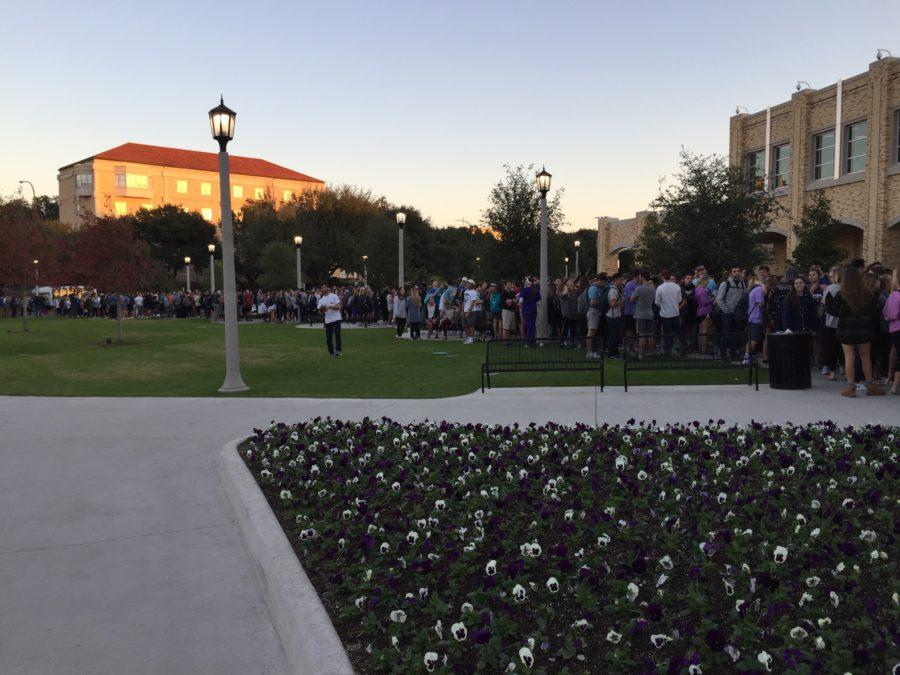 Three hours before the ticket office would even be open, students brought homework, speakers, snacks and some even camping chairs to wait in line for their shot at Big 12 Championship student tickets.

Students started lining up at 2 pm to get their Big 12 Championship tickets, how early did you line you? @tcu @TCUFootball pic.twitter.com/rMxM7GgUDk

After the Frog’s win against Baylor Friday, students received an email inviting them to register for student tickets for $50. After registering for tickets, students had to pick them up at the Parrish Family Athletics Ticket Office in the Schollmaier Arena between 5 and 7 Monday night. Mark Cohen, Director of Athletics Media Relations, said that 3,200 students requested tickets.

The email warned students that, “all tickets will be issued as first-come, first-served” and that, “if there is more demand than availability, reserved seating will be based on priority rank and then lottery if necessary.”

With this desire to not only ensure they got a ticket but got a good seat in the stadium, students were ready to camp out with their friends in line for hours. By around 4 p.m., still an hour before the ticket office, the line of students wrapped all the way out past the Brown Lupton University Union on Stadium Dr.

Safe to say our @TCU students are excited about Championship Saturday. #BeatOU pic.twitter.com/bGqN5wIxgO

Students in the first wave of getting tickets received them for section 146, however, those later in the line, receiving their tickets closer to 7 p.m., were given tickets in section 442.

“I didn’t realize it was going to be as big of a deal as this,” said Lauren Boyle, a junior early childhood education major. “We showed up around 2:45 and there were probably 20 people already here.”

Thank you to all our TCU students who stood in line to get tickets to the game Saturday! U are the best!🐸🐸🐸🏈❤️

However, the process wasn’t smooth for everyone. The lack of clear barriers to form lines allowed some people at the last minute to cut in front of those who had been waiting for hours, often to the boos of other students.

Many students were also frustrated because the email they received told them that friends could not pick up tickets for each other and that everyone had to be present for their ticket, but then some said they saw this happening anyway.  Elizabeth Hanson, a senior speech pathology major, waited four hours to claim her ticket and was frustrated at this lack of order.

“I am sad that they let people pick up tickets for friends and that people who stood in line for four hours didn’t get in the 100’s section because of it and there was no order,” Hansen said. “People had like 60 IDs and there were only four ticket windows open.”

Hanson said she plans to call the ticket office to formally complain about the way ticket distribution was handled.

Cohen said that all of the students who requested a ticket before Monday’s noon deadline received their ticket.

The championship game is scheduled for Saturday, December 2, at 11:30 a.m. at AT&T Stadium as TCU once again takes on Oklahoma.

Riley Knight contributed to this story.