Cost of textbooks on the rise 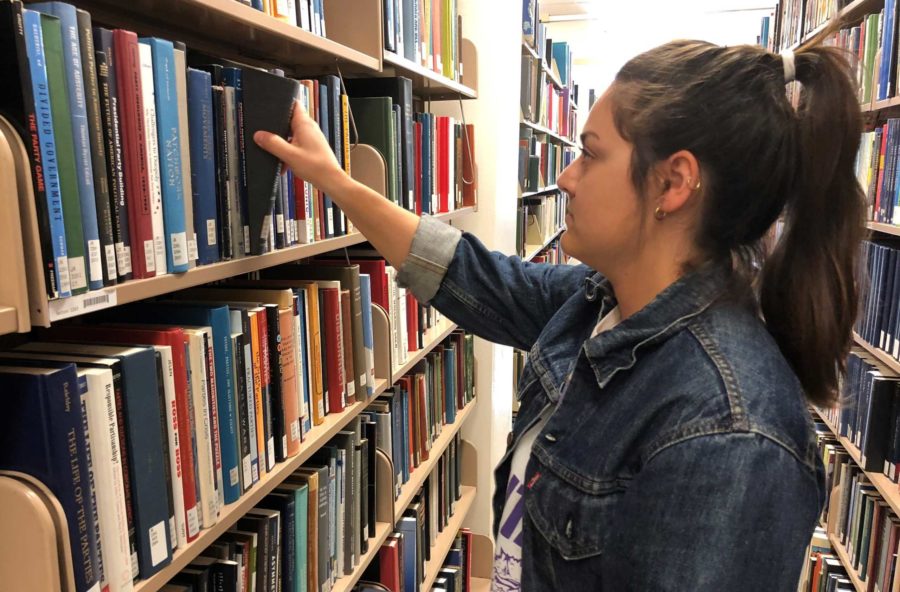 Junior Film, Television, and Digital Media major Sarah Persson checks out a book in the library. (Photo by Elizabeth Hinz.)

When sophomore criminal justice major Kyle Valenci walks to class this semester, his backpack is always packed with required textbooks costing between $600 and $800.

The answer to how much students spend on their books depends on who’s being asked: The National Association of College Store’s survey put a $579 estimate on book expenditures for the 2016-17 academic year. The College Board estimates student’s bill for both books and other school supplies to be around $1,200 a year.

At TCU, the average student pays $920 for both required books and other school supplies for classes, according to the Office of Financial Aid.

About 78 percent of every dollar spent on a textbook goes to a publisher, making the publishers the major decision-makers for textbooks’ price tags. Five textbook publishers control 80 percent of the market, meaning this small group can drive up prices without worrying about losing customers.

“The fewer you have, the more they are able to act as a near monopoly,” Schiffer said. “They’re not really competing with each other, so they’re able to bump the prices way up.”

From January 2006 to July 2016, consumer prices for college textbooks increased by 88 percent, according to the Bureau of Labor Statistics.

According to Follett Higher Education, publishers may create a new version of a textbook every two to three years, even if the content is mostly the same. This eliminates the option of reselling cheaper, used books.

“We get as many used as we can, but once those are gone we fill the rest of the shelves with new copies,” TCU Campus Store operation manager Sarah Wright said. “In the campus store we bid for used books, so it’s almost like we’re competing against other stores for them, and when the books are gone, they’re gone.”

Mathematics instructor Dennis Ledis said he sometimes looks to use these older edition textbooks in his classes because they, “tend to be a bit cheaper and have virtually the same content” as the new editions.

“Everything’s constantly changing,” he said. “If you’re taking a class in current American politics, you don’t want a book that the last election they cover is 2008.”

These new edition textbooks are presented to professors who ultimately decide which books students have to purchase. This system can result in professors choosing textbooks based on quality and content without necessarily considering the best price.

Schiffer said since professors don’t buy the books themselves, some aren’t as invested in the cost of the books.

“We don’t have to spend our own money,” Schiffer said. “So it’s more likely that we will adopt something that’s more expensive than if we were the ones who actually had to pay for it.”

Ledis added there aren’t many cheap textbooks, and if there’s only a $10 difference he would still choose the “better” one for his class.

“Since I teach math, some textbooks come with online components, such as access to the e-book, practice quizzes and exams, worked out problems, ‘how-to’ videos,” he said. “All of that content is expensive to create in the first place, so it justifies a higher price.”

Other professors look for alternatives to traditional textbooks to lower the cost for students.

“It’s cheaper to do it this way for them,” she said. “And I just can’t imagine saying ‘here, buy a book and there are 15 chapters, and we’re going to use two of them. Unless you’re serious about using it, you probably shouldn’t require it.”

Tyson Browning, professor of operation management, is co-author of the textbook Design Structure Matrix Methods and Applications, and requires students to purchase his book for a graduate elective course.

“This is not a typical textbook,” he said. “Students can get it for less than $50 (new) and for even less used.”

Browning said because he wrote it, there are not new editions coming out every two to three years, so students should be able to find cheaper, used copies.

Some students challenge high prices by renting their textbooks online. More than 60 percent of students surveyed by the National Association of Collegiate Stores said they believe it’s cheaper to rent what they need.

“I rented two of my books because it was a lot cheaper,” Valencia said. “I’ll price match it on Amazon, and if I can get a better deal I’ll buy it from there.”

Wright said although the campus store isn’t affected as much as other markets, there has been an overall decrease in bookstore text sales.

“You know you can go online and Google ‘textbooks’ and there are hundreds of sites,” she said. “So there’s just a lot more competition and a lot more availability online.”

Students are continuing to buy and rent print texts, but most college-aged students– despite being considered “digital natives”– continue to prefer print over digital textbooks.

The preference for print over digital can be found at the TCU Campus Store, where Wright says she speculates the reliance on an internet connection to access a textbook makes digital less desired.

“With a physical book, they know they’ve got it,” she said. “They’re always going to have it, and it’s just more tangible.”

Students also say another disadvantage of digital copies is the glowing screens’ effects on their eyes.

“I don’t read well on a computer screen,” Valenci said. “It strains my eyes, so I use a print book where I can highlight stuff in the book and make notes, and it’s easier.”