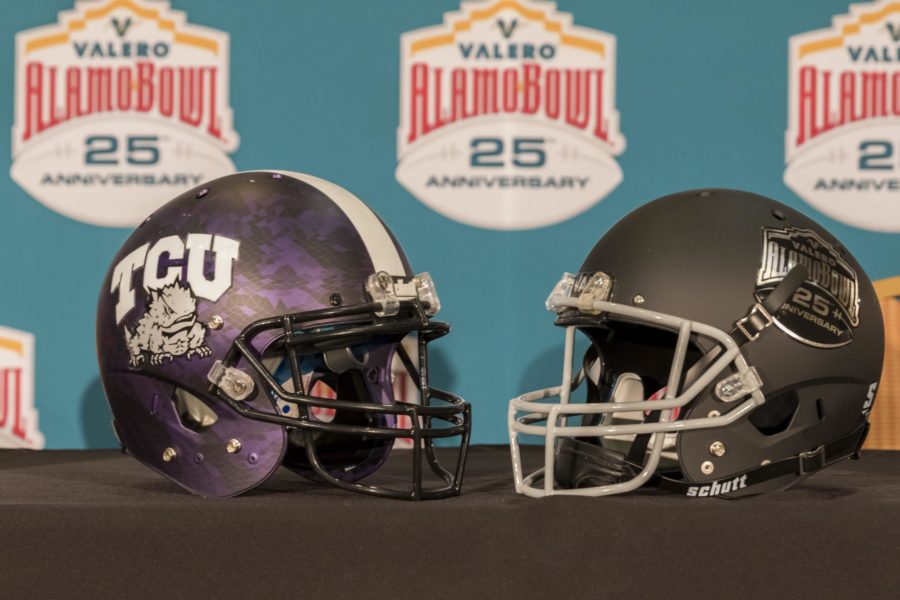 TCU arrives in San Antonio for the Alamo Bowl. Photo by Cristian ArguetaSoto

By Garrett Podell and Robbie Vaglio

The Horned Frogs were left out of the New Year’s Six despite finishing as the runner-up in the Big 12. Instead, they were sent to San Antonio for the second time in three years to play in the Alamo Bowl for a Dec. 28 matchup against Stanford following its 41-17 loss to Oklahoma in the Big 12 championship game.

“Here’s what you’ll find out — the team that wants it the most will win it,” Patterson said. “Ninety percent of the time, when they have more reason to win, they’ll be the team that wins it. That’s what I told them right off the bat.”

The Horned Frog coach will have to hope this season’s TCU team resembles the makeup of his 2014 and 2015 teams, not last year’s team that couldn’t quite find the finish line against Georgia in the Liberty Bowl.

This season, the Horned Frogs are a veteran-laden team, recognizing 35 seniors in its regular-season finale against Baylor. Quarterback Kenny Hill is among those who are eager to go out “the right way.”

“The Big 12 Championship Game leaves a bad taste in your mouth, and lucky for us, we’ve got one more, that’s the best way to get rid of it,” Hill said. “We need to win this. It just comes down to playing well and executing the way we can to come out with a ‘W’ because I’m not trying to go out my senior year with a loss.”

Even though it’s not in the New Year’s Six, the Alamo Bowl features two top-15 teams who were the runner-ups of their respective conferences, but Patterson desires to finish in the top 10 for the third time in four seasons and the sixth time in the last 10 seasons.

“A lot of people would be satisfied — you’re one of the top 15 teams in the nation,” he said. “That’s not where we’re trying to get as a program. At least I’m not.”

Return of the Jet?

Sophomore running back Darius Anderson will be a game-time decision for the Alamo Bowl as TCU takes as much time as it can to make a decision about whether to use its leading rusher against Stanford.

Patterson wants to leave San Antonio as an Alamo Bowl Champion once again, but he’s also balancing his leading rusher’s health for next season when he will return as the team’s most experienced back after the graduation of senior Kyle Hicks.

“You can’t accomplish anymore in this season, so you got to make sure he is ready to go and there’s no chance of putting him in harm’s way,” Patterson said.

Anderson rushed for 768 yards and eight touchdowns, both team highs, in 10 games. He left in the second quarter of the Nov. 11 game at Oklahoma with a leg injury, having scored TCU’s first touchdown with a 13-yard run on his first carry of the game.

Anderson’s health has indicated a return to action is plausible.

On their best behavior

The Horned Frogs return to San Antonio for the Alamo Bowl, and Patterson said the team will use the same curfew and bed check procedures as two years ago when quarterback Trevone Boykin was arrested and sent home following a bar fight.

“It was tight last time,” Patterson said. “We had bed check. He was in bed check. We knew what we were supposed to do. You can’t control knuckleheads.”

Losing their star signal-caller had a crippling effect on the Horned Frogs who fell behind the Oregon Ducks 31-0 in the Alamo Bowl two years ago.

“We obviously had some adversity,” Patterson said of that week’s events. “Kind of took the wind out of our sails. We kind of regrouped, and it came up to be an experience people will remember the rest of their lives.”

Patterson said the same penalty is in place for a similar violation this year as he hopes to prevent another incident and his players have received the message.

“It’s kind of tempting,” senior wide receiver John Diarse said. “A lot of places you can go and have a drink or two if you’d like, but Coach P has been on us for the past month about being smart about what you do and to enjoy the week while being smart in our decision-making.

TCU’s current quarterback uses competition to avoid the issue of nightlife leading up to the Alamo Bowl.

“Two years ago that happened and then we go to the Liberty Bowl and everyone said you can’t be going out and doing all that,” Hill said. “They told me you’re not allowed to go to that bar, which is fine because I’ve been beating Shawn Robinson in NBA 2K, he talks a lot of mess, but he can’t hang.”

At the Alamo Bowl two years ago, TCU head coach Gary Patterson wore a black shirt as his Horned Frogs fell behind 31-0 at halftime to the Oregon Ducks. He then changed into a purple shirt at halftime after saying “black wasn’t working.”

After tying the biggest bowl comeback ever with TCU’s 47-41 triple-overtime victory over Oregon, Patterson reflected simply on the wardrobe alteration in his postgame interview; “Purple works,” he said.

This time around, fans are curious as to what shirt Patterson will don Thursday against Stanford. For now, the TCU head coach is still weighing his options.

“I haven’t decided yet, probably because they’ve been on me so hard, our colors are purple and white, I’m starting to lean towards the purple a little bit,” Patterson said.

The Horned Frogs’ offensive unit will face a daunting task against Stanford’s athletic and physical defensive squad in the Alamo Bowl.

“They’re a well-coached unit,” TCU co-offensive coordinator Sonny Cumbie said. “They’re very big, they’re physical and you can tell they’re a group that doesn’t give you anything easy. It’s a big challenge for us.”

They also limit the big-play, something the Horned Frogs uptempo offense thrives on.

“They don’t allow you to make any big ‘home-run’ plays,” senior running back Kyle Hicks said. “They try to keep everything in front of them. They’re a sound football team.”

The Stanford Cardinal is one of only 10 teams to allow an average of fewer than 25 points per game for four straight seasons. This season, the Cardinal have only surrendered an average of 21.5 points per contest, good for second in the Pac-12 and 30th nationally.

Senior wide receiver John Diarse is excited about the challenging matchup but realizes that he and his teammates must take the Cardinal seriously.

“They’re physical from their front four to their back seven,” Diarse said. “As a secondary, they play really well together. Their corners are very long, can be physical and can make tackles. We have to match them physically and use our speed in ways they aren’t used to.”

Diarse mentioned some miscues in Stanford’s defense that he noticed while watching film and believes that the Horned Frogs can exploit them to get the victory.

“I think they have some wrinkles that can put us over the top,” Diarse said. “As long as we execute our routine plays like we have all season, I believe that could give us the victory.”

Junior safety Justin Reid ranks eighth nationally and first in the Pac-12 with five interceptions on the season. The junior also averages 7.5 tackles per game. Hicks expects him to make his presence felt.

“I expect him to fly around for them like he has all year,” Hicks said. “He’s made a lot of big plays for them this season. He’s very smart and has a really good football IQ, he’s a great leader on the field.”

As TCU’s battle-tested defense prepares for the Stanford Cardinal in the Valero Alamo Bowl, they prepare for a unique challenge: multiple match-ups against Heisman finalists.

The Horned Frog defense will face Stanford running back and Heisman runner-up Bryce Love Thursday night, one game away from their second matchup with the Heisman Trophy winner and Oklahoma quarterback Baker Mayfield.

TCU’s previous contest, a loss to the Oklahoma Sooners, featured a clinic led by the superstar. He completed 15 of his 23 passes, good for 243 yards and four touchdowns. Mayfield also contributed an average of 10.8 yards per rush, utilizing his speed six times for 65 yards.

Now, the Horned Frogs must flip the script and focus on Love, a stat sheet stuffer. Love ranks first nationally in total rushing yards, rushing yards per contest and rushing yards per attempt. Additionally, Love has the most 100-yard rushing games this season and boasts 23 rushes of at least 30 yards, a statistic no player has achieved the past two seasons. He averages 43.8 yards per scoring play.

“Stanford has a mentality that they want to go run the football,” TCU defensive coordinator Chad Glasgow said. “They’re a very physical football team. You have to match their physicalness to have a chance to slow them down.”

Plagued by an ankle injury for most of the season, Love’s production has been limited over the past few games. Stanford head coach David Shaw remains optimistic about Love’s availability for Thursday’s contest against the Horned Frogs.

“He’s just trying to get his ankle as healthy as it can be so he can come and play with his teammates tomorrow night,” Shaw said.

TCU head coach Gary Patterson sarcastically responded, aware that a Heisman finalist with a month of rest could prove to be fatal for the Horned Frogs.

“I’m really excited about that,” Patterson said. “For him to have four weeks of rest, a healthy Bryce Love- holy-moly.”

In Patterson’s eyes, Love separated himself from his peers based on his attitude toward life.

“What I like best about Bryce Love, just listening to [Shaw] and watching from afar, is the way he handles everything in life,” Patterson said. “Football is really important, and he wants to be a great player, but the bottom line, he wants to have a great profession when he gets done and help people.”

Patterson and the Horned Frogs look forward to the match-up against the nation’s best running back.

TCU faces Bryce Love and the Stanford Cardinal Dec. 28 in the Valero Alamo Bowl in San Antonio. Kickoff is set for 8 p.m.