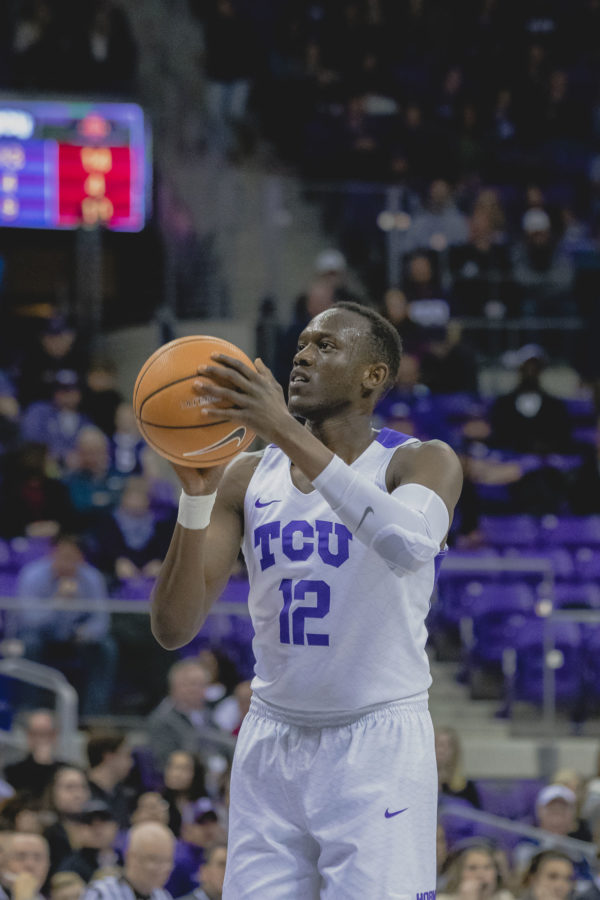 Kouat Noi focuses on the basket as he shoots a free throw against Iowa State. Photo by Cristian ArguetaSoto

Currently sitting atop the Big 12 with a three-point field goal percentage of 48 percent, redshirt freshman Kouat Noi has transitioned into Jaylen Fisher’s role as a legitimate threat from beyond the arc with Fisher out for the year with a torn meniscus.

Jamie Dixon was aware of Noi’s talent during the recruitment process, but both he and his staff never expected Noi to blossom as early as he has.

“I’d be lying if I expected him to lead the conference in that aspect,” Dixon said.

Noi’s recruitment was different than normal as TCU started heavily recruiting him late in the process. Dixon was sold on Noi after watching a tape of the Australian under-19 basketball team.

“He was playing against good competition in a high-level game, and having coached in that I know what kind of caliber player you need to be,” Dixon said.

“We really liked how he played without the ball and passed,” Dixon said. “He was playing on the under-19 team in the position that we wanted him to play and in a similar style of play, so we thought the adjustment would be good. Just not this good.”

Entering TCU as a redshirt, Noi utilized his year off by working hard during practice and in the weight room to improve his game.

“Kouat got to practice against Kenrich every day last year,” Dixon said. “We saw a level of competitiveness and fearlessness from Kouat. That definitely made him better.”

His teammates saw glimpses as well.

“He was really good last year so I knew he was going to step in and be ready to go,” TCU guard Desmond Bane said. “Our seniors bring it every day. If you aren’t on your game, you’re going to get squashed, so that really helped Kouat and it’s shown on the court.”

This season, Noi’s hard work has paid off, as he’s become one of Dixon’s go-to offensive weapons.

“We are trying to get him into the game as quick as possible,” Dixon said. “With him and [JD Miller] we have a great combination. He shoots the ball really well, brings down some big offensive rebounds at times and makes free throws. He’s just really good offensively and defensively. He got his hands on the ball a lot on Tuesday and I see him getting better.”

Bane, who currently sits at third in the conference in three-point shooting, had nothing but praise for the freshman.

“He’s a great shooter, great player and a great addition for us,” Bane said. “He’s getting more comfortable out there for us. He’s very versatile, he can guard several positions and he can play several positions on offense. He’s a huge part of what we do.”

Like Noi, his teammates have shown flashes of brilliance on the defensive side of the ball, with strong games against West Virginia and Oklahoma State. However, games like the one against Vanderbilt have shown the team’s defensive vulnerability. Bane believes the team is improving and on the right track.

“Coach Dixon has been preaching it here since our trip in July to Australia,” Bane said. “Defense has been something that we are really emphasizing in practice these past couple of weeks. We continue to believe that if we play well defensively, we can do special things.”

Noi and the Horned Frogs will return to Schollmaier Arena Saturday against No. 10 Texas Tech. Tipoff is scheduled for 1:00 p.m.