No. 24 Women’s basketball fall to No. 22 OSU in physical battle 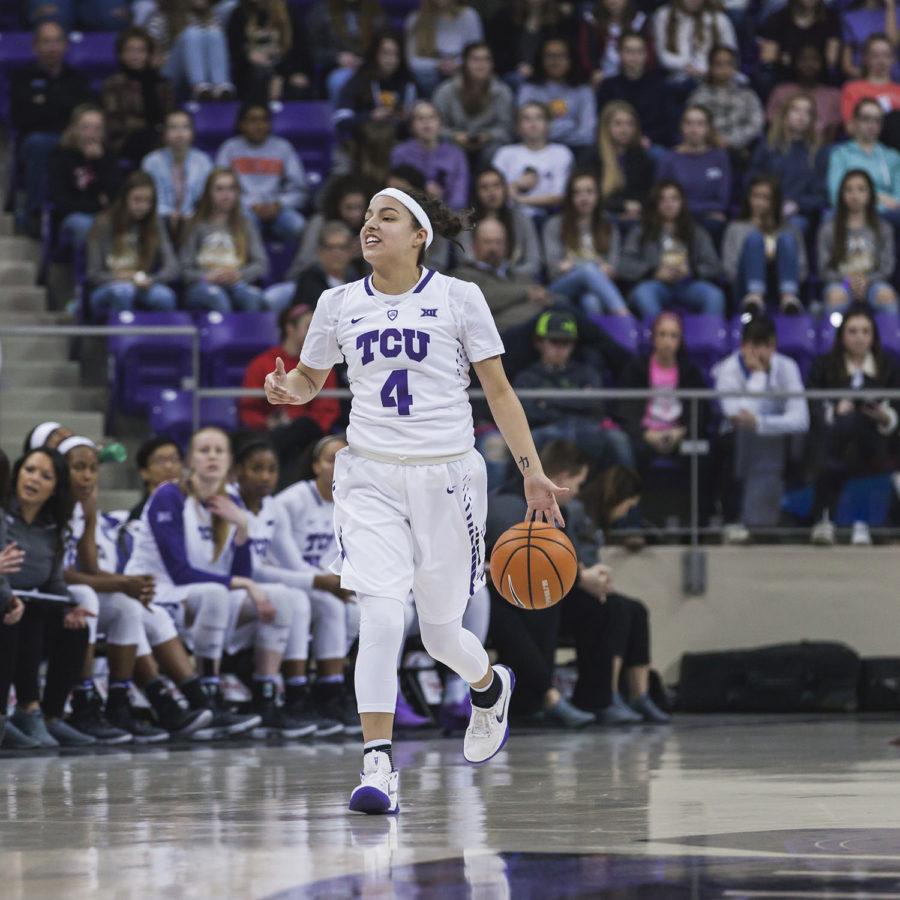 The No. 24 ranked TCU Horned Frogs lost their second-straight game Wednesday, falling to No. 22 Oklahoma State, 71-54.

The teams entered the game tied for third place in the Big 12, each with identical records of 7-4 in conference play. The Cowgirls took sole possession of third place with the win, securing a critical win with just six games remaining in the season.

The game was defined by the defensive efforts on both sides and two Oklahoma State runs at the ends of the second and fourth quarters that ultimately led them to victory.

The Horned Frogs begin the game by falling behind 8-0, missing their first six shots.

TCU ended the first quarter on a 9-2 run, taking a 13-12 lead into the second quarter. Sophomore guard Amber Ramirez and junior forward Amy Okonkwo scored all nine points during the run.

A back and forth second quarter was blown open when the Cowgirls went on a 7-0 run to end the quarter. The Horned Frogs did not score for the final 2:23 of the half and committed four turnovers, going into the half trailing 31-23.

The 23 first-half points was TCU’s season low. They had just two points from their starting five at the half.

The eight-point halftime lead that OSU built at the end of the second quarter turned out to be the deciding factor in the game, as the Horned Frogs would never lead again.

The team was outscored by just one in the third quarter, but a 14-2 Oklahoma State run towards the end of the fourth quarter sealed the Horned Frogs’ second consecutive loss.

Head coach Raegan Pebley said she was impressed with the team’s defense, but their inability to finish at the rim was the deciding factor in the game.

“I think for the most part of the game, holding one of the best scoring teams in the country to 38 percent, we did some good things we just did not convert on our layups,” she said.

The Horned Frogs actually shot a better field goal percentage than the Cowgirls, but made it to the
free throw line just six times despite their 61 field goal attempts.

Oklahoma State, on the other hand, got to the free throw line 17 times and converted 15 of their attempts for points.

“You’ve got opportunities there to finish and you gotta do that,” Pebley said of the team’s inability to both score at the rim and draw fouls.

Offensively, TCU had just one player in double digits.

In a scary moment, TCU sophomore guard Kianna Ray collided with an Oklahoma State player and slammed her head onto the court. Ray was down for a few minutes and did not return to the game. Pebley had no updates on her condition after the game and said she wants to look at the film of the hit.

They will look to rebound from consecutive losses this Saturday when they take on No. 3 Baylor in Waco. Tip-off is set for 7:00 p.m.