Bottom of Horned Frogs’ lineup propels them to 7-1 victory 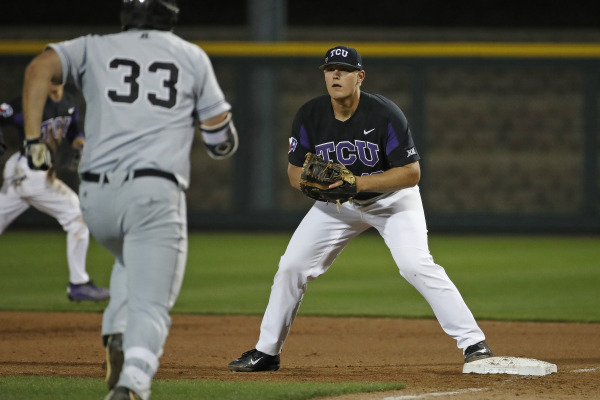 The Horned Frogs scored its seven runs on nine hits despite the top four hitters in their lineup combining for just one hit. The five, six and seven hitters: Michael Landestoy, A.J. Balta and Adam Oviedo would combine for seven hits and four RBI’s.

The Horned Frogs opened up the scoring with a four-run bottom of the second that would put them in the driver’s seat for the rest of the night.

Senior Michael Landestoy’s RBI double scored Josh Watson from first base for the first run of the game and freshman Adam Oviedo added another with a double that scored Landestoy from second.

A groundout by freshman Coby Boulware would score A.J. Balta from third to extend the lead to three.

Zach Humphreys would knock in the fourth and final run of the inning on another sacrifice groundout that scored Oviedo from third.

TCU would add their fifth and sixth runs of the game after Oviedo singled to right, scoring Landestoy, who reached on a double, and Balta who reached on an infield single.

“Adam had a good night,” head coach Jim Schlossnagle said of the first-year. “Adam had the timely hits.”

Oviedo finished the night 3-3 from the plate with three RBI’s.

The team added its seventh and final run in the bottom of the eighth inning after a Zach Humphreys single scored Connor Shepherd from third.

On the mound, true freshman Russell Smith made his fourth and most impressive start of the season. The lofty left-handed pitcher had six strikeouts in four-and-two-thirds innings pitched and surrendered zero earned runs.

Schlossnagle complemented the freshman’s performance and acknowledged his improvement from a few months ago.

“He got better at the end,” he said. “He’s not even close to the pitcher we had in the fall and spring.”

He said that Smith’s performance in the fall and spring practices had him competing to be a regular weekend starter but a tentativeness, once the season began, has placed him behind the three veterans.

“He’ll learn from that,” Schlossnagle said. “He just needs to learn from it soon.”

Schlossnagle was satisfied with the team securing a win but understands they are far from where they want to be.

“We’re just a tremendous work in progress,” he said. “There is not a phase of the game we don’t have to get better at.”

Schlossnagle added that he was most alarmed with the team’s mental errors in areas such as base running and pitchers fielding abilities, things the coaching staff has stressed since the first day of practice.

“Those are things that are hallmarks of our program,” he said. “We’re 18 games into the season, we shouldn’t see some of the things we’ve seen.”

The Horned Frogs will look to continue its winning with a homestead stretch through the Big 12’s opening weekend. The team will take on Kansas State Friday at 6 p.m., Saturday at 2 p.m., and Sunday at 1 p.m in Fort Worth.