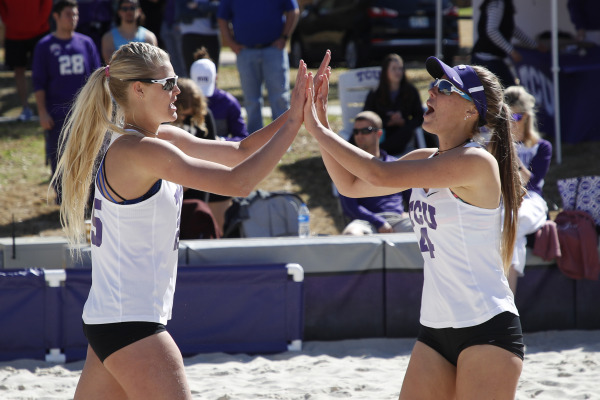 TCU vs Tulane beach volleyball at TCU in Fort Worth, Texas on March 03, 2018. (Photo by/Sharon Ellman)

In the victory over UAB, Jordan Westendorff and Brooke Sassin earned TCU’s first win of the match by defeating Erin Bognar and Emily Martinez, 17-21, 21-11, 15-9. The Horned Frog combo of Jaelyn Greene and Jillian Bergeson needed only two sets to best Kaylee McClure and Tressa Buckland, 21-19, 21-19.

TCU’s Jensyn Bledsoe and Molly Scheel had a three-set battle against Avei Logoleo and Haley Jared before coming up with the victory, 21-16, 19-21, 15-13, which was the Horned Frogs’ final victory over UAB.

“We have grown after the tough weekend we had in California, and we’re more competitive and calmer in these situations,” TCU beach head coach Hector Gutierrez said. “We needed the three tiebreaks, and the girls are doing a good job under pressure. The girls finally got a win under their belts after a long time, and I’m happy for them.”

In the loss to FGCU, TCU’s Sassin and Westendorff did defeat Alayna Ryan and Kaitlan Krivdo, 21-11, 21-18. The other victory for the Horned Frogs over the Eagles occurred when House and Hill defeated Mackenzie Allen and Amanda Carroll, 21-7, 21-18.

The Horned Frogs resume action Sunday as they face off against UNC-Wilmington at 9 a.m. and No. 8 South Carolina at 1 p.m. on Wheeler Beach, closing out the Gamecock Challenge.

“It’s going to be a hard day, and everything is going to be tough,” Gutierrez said. “We need to keep being competitive and the matches will probably go down to three sets, and we need to have the same concentration level we did today.”