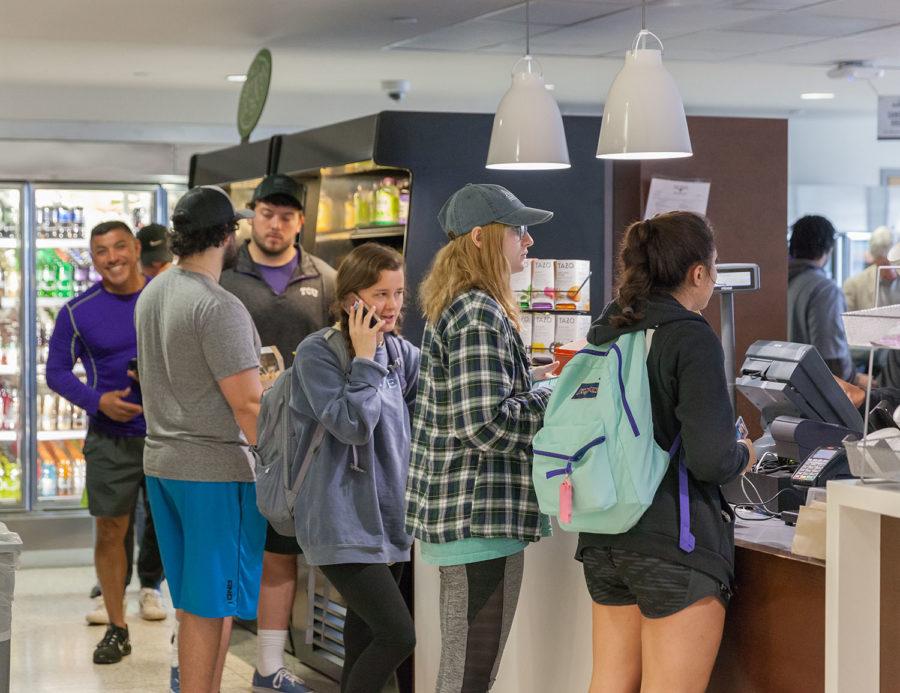 SGA looks to shorten the lines at Bistro Burnett. Photo by Cristian ArguetaSoto

TCU students are all too familiar with long lines during their lunch hour, whether it be at Market Square or Bistro Burnett.

Taylor Sutton, SGA’s dining services committee chair, views Bistro Burnett as a bigger problem on campus and has been searching for options over the past few weeks to remedy the problem.

“The combination of the Bistro being consistently under-staffed and the small space really causes a lot of problems,” Sutton said. “It takes so long to get a peanut butter and jelly sandwich. It should take two minutes, but you have people waiting in line for coffee and one person at the register. People can’t even get to the drinks in the back with the mass of people.”

What’s shocking to Sutton is that the lines seemed to have gotten worse this semester. Sutton said he does not remember last semester being as hectic as it has been recently.

Laine Zizka, SGA’s director of communications, originally noticed the issue at Bistro Burnett and brought the problem to Sutton.

“It’s no secret that the lines in Bistro Burnett get long and dicey during the lunch hours, especially between passing periods,” Zizka said. “I study frequently in the library and have seen it with my own eyes and experienced it myself.”

Zizka said she has also heard complaints from many students across campus.

“I don’t even go there anymore because the lines are so long,” first-year pre-business student Jack Leonhard said. “I went there a few days ago and saw the line and decided to go somewhere else. I even had the time to wait in line since I had no classes afterward, but I couldn’t do it.”

Complaints about Bistro Burnett have circled the library’s snack stand since its arrival on campus.

Bistro Burnett, you are expensive and slow and always out of ciabatta bread and I never want to see you again.

“The main idea we are currently pursuing is talking with TCU Police about bringing food trucks in between Rees-Jones and the library a few times every week,” Sutton said. “If people would go to those, that would definitely alleviate some of the line issues.”

However, this solution has a catch. The food trucks would most likely be forced to park in the fire lane outside the library which is not allowed by TCU police.

Sutton feels confident that SGA could strike a deal with TCU Police.

“TCU police has been open to things like this in the past,” Sutton said.“They’ve let it happen a few times.”

Zizka said that while the food trucks may not be the best option, the idea could lead to a bright future for the TCU dining experience.

“In time, that could morph into something else if it works better,” Zizka said. “However, the way it was pitched to me, food trucks could be both a potential solution to the problem and a chance to connect further with our Fort Worth community.”

Sutton has also considered bringing a barbecue smoker or the Big Purple Truck in between Rees-Jones and the library.

“If the food trucks couldn’t make it one day, we could substitute them out for the Big Purple Truck,” Sutton said.

However, the barbecue smoker would not be a permanent solution.

“You don’t want to eat barbecue every time you’re going to Bistro for a sandwich,” Sutton said. “People may also complain about smoke, as well. The courtyard between the two buildings is very large but we still aren’t sure where we will put it.”

Sutton continues to call on students to make this dream a reality.

“The only way to implement a lot of these things is to get a lot of positive student opinions on this,” Sutton said. “If we get a wave of students that are in support of it, lots of time administration will decide to go through with it.”

The most recent example of this is Chick-Fil-A’s addition to the Brown-Lupton University Union five years ago.

Sutton has also considered moving the sandwich station at Bistro Burnett into the cubby under the library stairs across from the IT desk as that space is not being used by anyone right now.

“The main problem with this is noise,” Sutton said. “People over there want a quiet space to study, so if we run the sandwich aspect, there would be a lot of noise in that area.”

The dining committee will only pursue this possibility if the others do not work out, Sutton said.

The long-term plan is a new dining hall that is set to open along with the renovated Neeley School of Business. Until then, the dining committee said they will be working hard to make the Bistro Burnett experience as smooth as possible.

“The bottom line is we are going to be focusing a lot of our resources to fix Bistro Burnett,” Sutton said. “If these ideas don’t work out, we will create more ideas.”