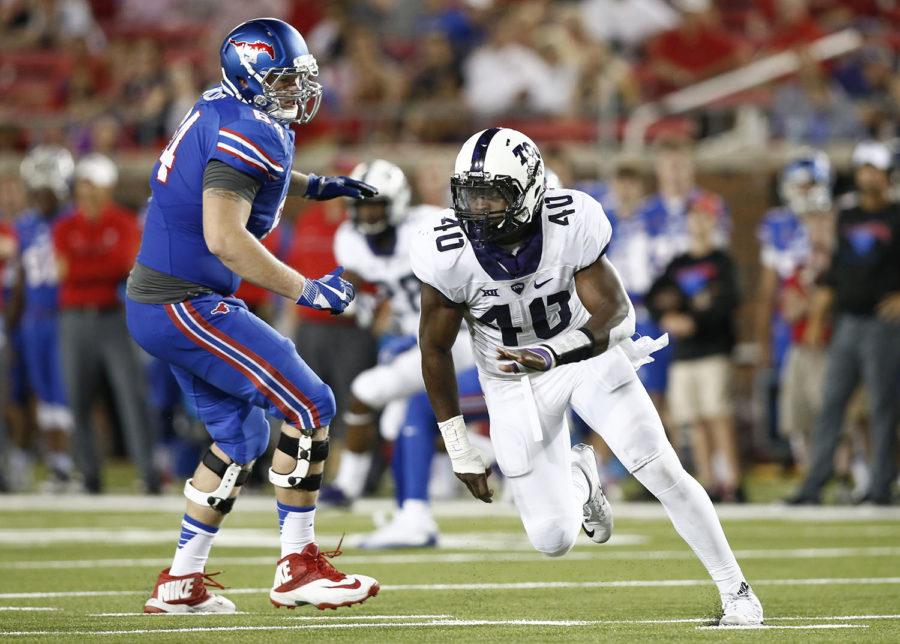 The wrist surgery was the final blow.

Former TCU defensive lineman James McFarland, who returned to his hometown of West Monroe, Louisiana after graduation, closed out 2017 by shelving his NFL dreams.

His time as a Horned Frog left him battered. His injuries included a broken elbow and a broken toe. He said he no longer has a meniscus in his right knee. He said he assessed the toll of football on his body and decided to move on.

Facing a crossroads, he turned to his high school mentor, Alicia Johnson, for guidance.

McFarland said, “We talked about paying it forward and I just want to help kids do other things with their life, whether its football or other things.”

Johnson, clerk of the Criminal West Monroe City Court, told McFarland a probation officer job had been open for 11 months and urged him to apply.

“He’s very well known for his morals and work ethic from high school, so with James McFarland, the judge did not have to do the interview because he knew from the character, his family, and people still see him as a role model,” Johnson said. “Once he got here, things just automatically clicked and it feels like he’s been working here for a while.”

While many TCU football players arrive on campus with NFL dreams, most are like McFarland. During Gary Patterson’s 17-season tenure as TCU head coach, 43 players have been drafted, with 100 being invited to NFL training camps.

Only 1.5 percent of all college football players compete in the NFL, according to a 2017 NCAA study.

McFarland played in every game during his first three years on campus. The high-water mark that earned him defensive MVP honors was the 42-3 smackdown of Ole Miss in 2014 Peach Bowl.

However, injuries eventually wore him down.

Instead of playing football, McFarland now spends his days pushing young people in West Monroe back onto the right path. His role as a probation officer impacts lives in a way that a football career never could.

“Those that come through our court here are on probation from in misdemeanor court, they’re mistakes,” Johnson said. “James then shares some of his life story and telling the youth that people always encouraged him and pushed him. So when these young guys come in here, they can tell that he works hard, which makes a difference.”

While his gridiron days are in the past, McFarland also maintains a strong connection with TCU football.

“James’ family is awesome, he’s awesome, and he’ll always be a Frog,” Patterson said. “I always invite him to come over to my house on our Pro Day.”

Former TCU wide receiver and NFL hopeful John Diarse, who’s also from Louisiana, said it’s crucial to have a leader like McFarland as a shining light in West Monroe.

“I think that’s very important, understanding the society that we live in now and how it’s not so safe compared to when we were younger when things were a little simpler, things were smoother, and people actually got along, so there’s a need for people in place who have a clear perspective that brings peace, comfort, and protection,” Diarse said. “I’m happy for him, and I’m glad he choose that route to express his leadership and the things that he believes in because we need more people like him in leadership positions like that.”

“As long as he wants to be here, it’s a permanent position for him to encourage people as he’s touched lives and encouraged people,” Johnson said. “He’s a mentor for someone who hasn’t come through this door, and he makes himself available for everyone.”