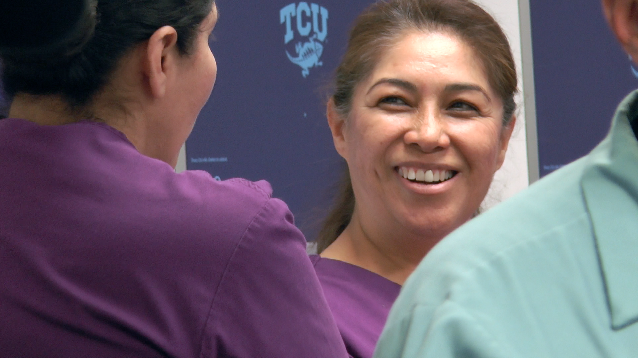 Rickel 243 is a typical learning space at TCU, but for an hour every Wednesday and Friday students are the teachers and TCU employees are the ones taking notes.

Twelve of TCU’s Spanish-speaking employees were selected by their supervisors to partake in a six-week intensive English program. After they clock-out from work, these employees meet to practice their pronunciation, perfect their grammar and master the phonetics of the English language.

Five students from the John V. Roach Honors College serve as speaking partners in the program. As a part of their honors communicating effectively class, they were tasked with a project — the main goal of it being to change the world. The students decided the best way to go about it was to try to increase literacy on campus.

“We wanted to start a program where staff would feel comfortable to get help and practice their English with [people] who are really passionate about wanting to help them learn,” Victoria Becker, a first-year strategic communication major and speaking partner, said. “There are so many opportunities that are missed out on because there is a language barrier.”

Becker, along with the four other students, primary role is to facilitate conversations in English with the employees.

“For the first half of class, we roam the classroom and help students struggling with any concept,” Mark Lillard, a first-year pre-business and Spanish double-major and speaking partner, said.  “For the second half, we break up into small groups, with each of us leading a group. We foster discussion in the groups and find ways to relate the lesson to their personal and work lives so that they may begin using their new language skills right away.”

Although Becker and Lillard can understand Spanish, some of the other speaking partners have a very restricted comprehension of the language.

Allie Benson, a first-year political science and psychology double-major and speaking partner, said that even though she speaks a little Spanish, she is able to help students with things such as their English pronunciation and syntax structure.

“I would still consider myself a beginner,” Benson said. “I can understand most of what they are saying in Spanish, but I answer them in English. This is beneficial for both me and them because I can practice my Spanish while they are learning English as well.”

The students said the use of English helps to immerse the employees even more.

“It is very tempting to try to communicate [in Spanish] because that would be easier for them and we could understand what they mean,” Becker said. “It is a challenge for them to be completely in English, but it gives them a real sense of what it’s like to be in an English intensive environment.”

One TCU employee and student in the course, Irma Lomas, said that although things such as reading, grammar and writing don’t come naturally to her, she is working to increase her skills.

“I want to learn English to communicate more with the people, with my supervisor and with everybody,” Lomas said.

Lomas moved from Chihuahua, Mexico thirty years ago and has worked at TCU as a housekeeper ever since. Even though she has lived in the United States for three decades, she said she gets nervous when she tries to speak in English.

“When the teacher asks me questions I say, ‘Oh my God … will it be all right? Will it be wrong?’” Lomas said. “It is very important to learn English because I can communicate more with my daughter, with students from here at TCU, with many people.”

Becker said this program is a way for her to not only give back to employees like Lomas, but to the university itself.

“I think so often here at TCU we take our education for granted,” Becker said. “It’s so rewarding to see how much they love to learn. They’re giving up an hour of their day even when they’re so busy with everything else going on. It is a great way for us to say thank you for all of your hard work.”

Human Resources plans to expand multi-level offerings by fall 2018 thanks to the positive response of campus support, supervisor recommendations and employees.