Patterson ‘not unhappy with anybody’ early in preseason camp 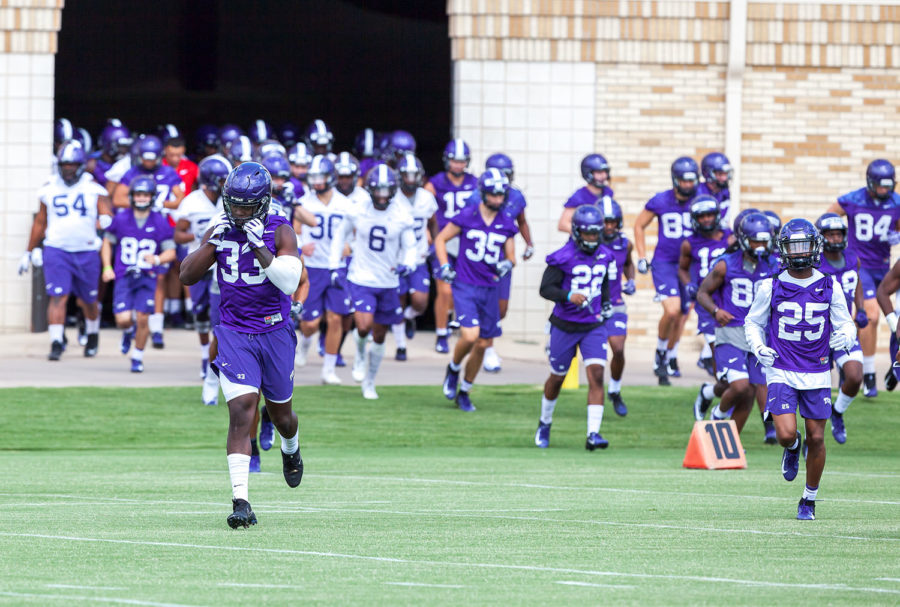 The Horned Frogs jog out to the practice field Saturday.

It’s August, which means football is right around the corner for the Horned Frogs as Saturday marked their second practice of the 2018 season.

With a number of seniors graduating from last season’s No. 16 team, including quarterback Kenny Hill, running back Kyle Hicks, center Austin Schlottman, cornerback Ranthony Texada, wide receiver John Diarse and safety Nick Orr, Head Coach Gary Patterson is faced with the daunting task of replacing those players with incoming freshmen or less-experienced underclassmen, but he said “there’s not anybody who I’m unhappy with right now.”

After the departure of Hill, the Horned Frogs will have to find a new quarterback.  The three players in the running appear to be sophomore Shawn Robinson, a sophomore transfer from the University of Pennsylvania Michael Collins and freshman Justin Rogers.

“Offensively, it’s going so fast it’s hard to tell about the quarterbacks because they’re all taking rotations and throwing the ball against ones, twos or threes,” Patterson said as far as declaring a favorite.

However, Robinson remains the odds-on favorite, having started a game for the Horned Frogs, a 27-3 victory in Lubbock against Texas Tech.

Hill, TCU’s starting quarterback the last two seasons, was at practice Saturday as an assistant coach. Patterson raved about his impact.

“He’s great because…here’s a guy that just came out of NFL camp, so things they worked on as far as getting the ball out of their hands and reads, where their eyes are and everything, it’s a big positive,” he said.

Having former players on the coaching staff is not something new for TCU.

“We’ve got seven or eight former guys,” Patterson said. “It’s the circle of life…its fun watching them become successful and want to go into this profession. It’s not an easy profession.”

The offensive and defensive lines both lost some key players from the 2017 team, Schlottman, Joseph Noteboom, Matt Pryor and Patrick Morris on offense and Matt Boesen on defense.

In Patterson’s eyes, the trenches are a work in progress.

“We’ve got to have eight [offensive linemen], at least, and we’ll know more tomorrow because we start in shells, and we’ll go from there.”

TCU also added linebacker Jawuan Johnson, a transfer from Northern Illinois who has already caught the eye of his head coach.

“Johnson has pushed all the other linebackers to be better, and he’s a guy that’s very serious about what he does, and he’s got great awareness,” Patterson said.

Patterson said that “Julius has been a surprise” and “Keenan’s come a long way.”  He also said that he doesn’t “know if any of them are playing at the high level of Ranthony yet.”

At the safety position, Patterson said that the team has more players competing for spots, but nobody with the experience of Orr.

Patterson’s overarching message to the players is a familiar one.

“It’s all in the details,” he said.  “Every day, we’ve got to get better.  We teach something new every day.”

TCU kicks off the 2018 football season on Saturday, September 1 at 11:00 AM CT against Southern at Amon G. Carter Stadium.