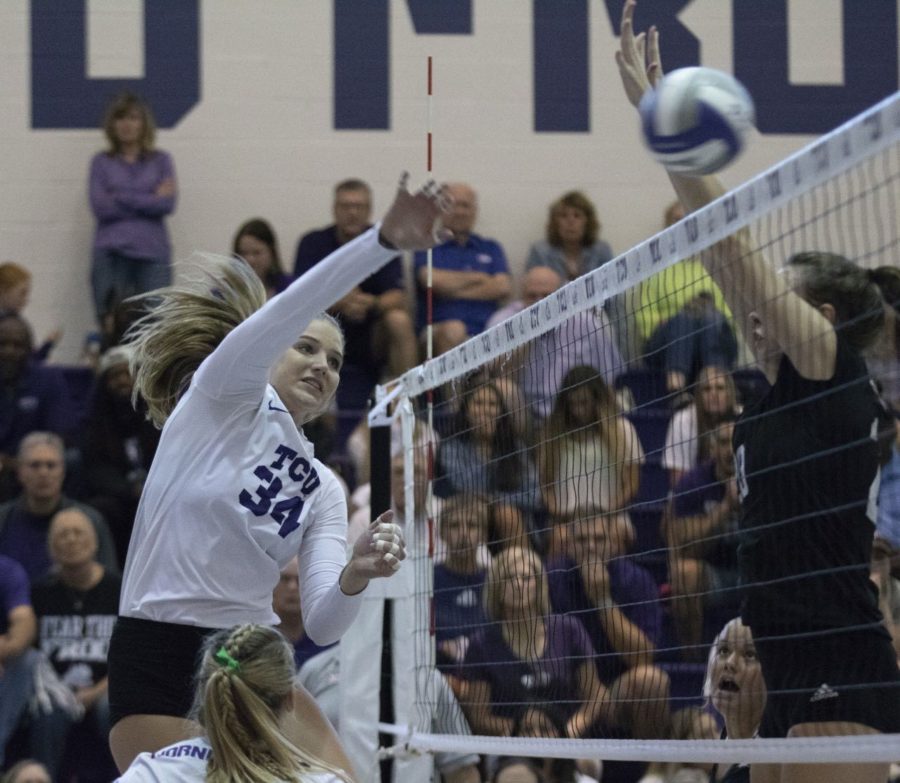 TCU volleyball has been nothing but dominant thus far this season, and that didn’t stop tonight against Southern Illinois University – Edwardsville (SIUE). The Horned Frogs looked unstoppable from the beginning as they swept the Cougars 3-0 (25-13, 25-15, 25-12) in their third of four games in the season’s opening weekend.

“I think we came out much sharper than we did yesterday,” Head Coach Jill Kramer said regarding the Frog’s match against Green Bay the previous day. “We knew what it was going to be like.”

SIUE came into the first set with their eyes set on defeating the home favorite Horned Frogs. Although the Cougars were able to trade points with the Frogs for the first half of the opening set, they soon had no answer for the fierce onslaught of the TCU hitters, primarily first-year Élan McCall. McCall led the team with 10 kills and a 50 percent kill rate.

In her first year as a Horned Frog, McCall is leading the team in all offensive categories, yet she insists that her teammates and the fans are the reasons for her early success.

“I think my team has been very supportive,” McCall said. “The fans are also insane. It’s such a college town, so everyone packs the stands. I feel like that gives you more confidence.”

After having never trailed in the first set, the Horned Frogs found themselves down early in the second set. However, they seemed unfazed by the adversity. A 7-0 run, fueled by a successful challenge call by Kramer, gave them the momentum they needed.

With their third straight sweep of the season in sight, the Horned Frogs had no trouble shutting down the Cougars in the third set.

The team was able to overcome a slight run at the end by the Cougars to handily win the set 25-12 and the match 3-0.

Despite the resounding victory, Coach Kramer knows the team certainly has room for improvement before they start Big 12 conference play.

“We’re not saying ‘Oh! Wow! That’s three wins!’ Win, lose, whatever, we are coming back the next day and getting better,” Kramer said.

The Horned Frogs look to finish the Cowtown Classic 4-0 when they take-on North Dakota on Sunday.