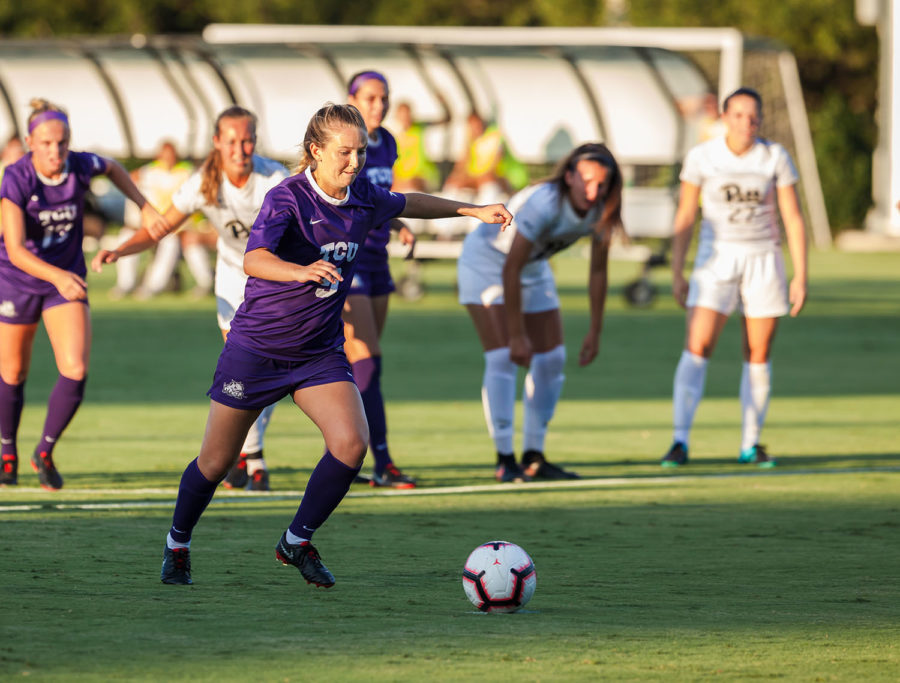 Kayla Hill steps up and slots home a penalty kick against Pittsburgh on August 30, 2018. Photo by Cristian ArguetaSoto.

The Horned Frogs entered Garvey-Rosenthal Soccer Stadium for Thursday night’s matchup against an undefeated Pittsburgh team knowing they needed to come out strong, and they did just that, defeating the Panthers 4-0.

Kayla Hill, McKenzie Oliver, Natalee Heiser and Haley Mallion all scored for the Horned Frogs, and the TCU defense kept the Panthers off the scoresheet for the first time this season.

“We made it a point of emphasis to make sure we started off well both halves, and I thought we did that,” Head Coach Eric Bell said. “It was a good performance by the team for 90 minutes, and I’m happy to come away with the victory.”

The Frogs came out in their usual 4-4-2 diamond formation and started five first-year players, the most of any match this season. Missing from the starting lineup was defender Tijana Djuricek, who dressed out but did not enter the match.

Midfielder Yazmeen Ryan missed her third consecutive match and was labeled as day-to-day by Bell.

TCU opened the scoring in the 16th minute when defender Chaylyn Hubbard was taken down at the edge of the box by a Pitt defender. The referee awarded a penalty and midfielder Kayla Hill stepped up, slotting it into the bottom-left corner.

After controlling much of the first half, the Frogs doubled their lead in the 42nd minute through forward McKenzie Oliver. Oliver received a beautifully chipped pass from midfielder Haley Mallion and took care of the rest herself.

“I saw the ball coming over the defense and I saw the keeper diving, so I just decided to take a touch past her and finish with my left foot,” Oliver said.

In the 64th minute, midfielder Tara Smith received the ball and sprinted down the right side of the field. Smith passed it to forward Natalee Heiser around the penalty spot, and Heiser calmly turned and finished past the goalkeeper for TCU’s third goal of the night.

The final goal came in the 89th minute– Oliver had a chance to score, but she elected instead to make an unselfish pass across the box to midfielder Haley Mallion, who tapped it in at the far post.

“We were excellent,” Oliver said. “As a collective whole, it was probably one of the better games we’ve played all season.”

The win improves TCU to 4-0-1 on the season, with the lone draw coming in their last game against SMU. With a strong performance behind them, the mood of the team after the match was upbeat.

“Out of all four of my years here, this is the best we’ve been,” Oliver said. “I think that we’re going to be very, very successful.”

After a five-game stretch at home to open the season, the Horned Frogs will play their next three matches on the road.

“I think that we’re going to have to be willing to fight and handle the physicality of the game,” Bell said. “Once we’ve done that, we can make it into a soccer game. If we’re able to do both, then I think we’ll be fine.”

TCU takes on Missouri at 6:30 p.m. Sunday in Columbia.