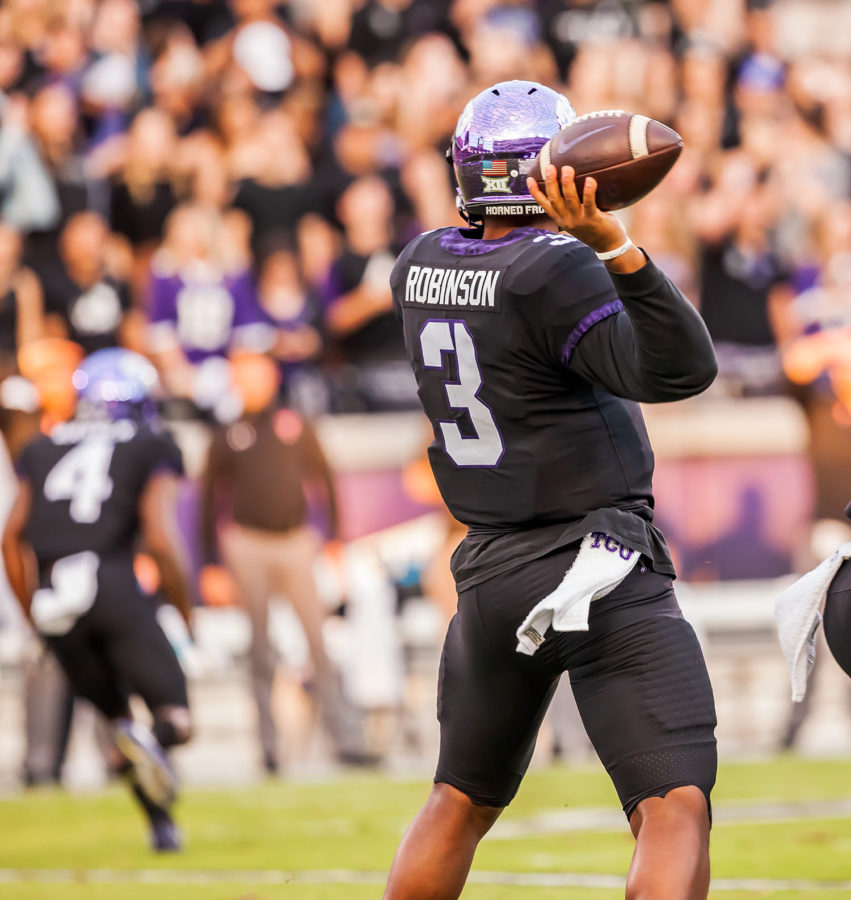 Shawn Robinson threw for two touchdowns and one interception two weeks removed from his shoulder injury. TCU vs TTU. Photo by Cristian ArguetaSoto.

By Garrett Podell and Robbie Vaglio

“We only have one person to blame and that’s me,” said head coach Gary Patterson. “I allowed two big plays. They did a nice job, got to give them credit. That’s an explosive offense.”

Robinson passed for 290 yards and two touchdowns while also rushing for 51 yards on seven attempts.

Texas Tech chose quarterback Jett Duffey to run the show and his versatility proved difficult for the Horned Frogs’ defense to match early in the contest. Duffey ran for 23 yards, broke multiple TCU tackles and accounted for 28 yards through the air on their first drive.

“You can’t make every play on the field,” said defensive end Ben Banogu. “The one thing you can do is learn from them and try to execute to the best of your ability. The moment that we stop having effort out there and stop executing, that’s when we stop playing football.”

Duffey finished the game with 89 yards rushing for one touchdown and passed for 190 yards and a touchdown through the air. He played every drive but the first of the second half.

The Red Raiders broke the scoreless tie as Clayton Hatfield connected on a 22-yard field goal midway through the first quarter.

The Horned Frogs appeared to have an answer for Texas Tech on their next drive. Despite fumbling the ball twice, quarterback Shawn Robinson led the Horned Frogs down to the Red Raiders’ eight-yard line.

Wide receiver Jalen Reagor could not control Robinson’s pass, bobbling it and dropping it for a loss of eight yards. TCU’s second fumble came on a designed Robinson run. He lost the football after his 16-yard rush, but it was recovered by wide receiver Derius Davis and returned to Texas Tech’s eight-yard line.

The drive culminated in an interception thrown by Robinson.

“Our players can’t turn the ball over,” Patterson said. “Our running backs have to secure the ball better. The ball bounced off a tight end in the end zone on the first one when they intercepted it.”

Patterson said that the offensive line will need to block better because “Shawn was running for his life.”

After holding Texas Tech to the one yard following the interception, the Horned Frogs quickly recorded their first points of the night. Their 42-yard drive was capped off by a 20-yard strike from Robinson to a wide-open Reagor.

The Frogs had an opportunity to extend their lead to seven points in the final seconds of the half following an interception by cornerback Julius Lewis, but placekicker Jonathan Song barely missed his 47-yard field goal attempt wide left.

TCU’s defense was able to hold the Red Raiders and their Air-Raid offense to three points in the first half. The Big 12’s top-ranked offense recorded only 124 yards and 3.8 yards per play. Texas Tech has averaged just under 600 yards per game this season. The Frogs earned 214 yards in the first half, with 155 coming from Robinson: 124 in the air and 31 on the ground.

“We held them to under their average, so we played well at times,” Banogu said. “The ball didn’t roll our way. The positive is we can learn from that and find a way to finish. We kind of let the game get away from us in the third quarter and we did a better job of that this week, but we didn’t win. We have to find a way to do that.”

“Our defense has our back every game,” said running back Sewo Olonliua. “We just have to pay them back on offense. They’re holding teams below their average every week. The offense just needs to step it up.”

Texas Tech regained the lead on a 62-yard pass from Duffey to wide-open wide receiver Ja’Deion High, giving them a 10-7 lead.

Following a third quarter in which the Horned Frogs only accounted for 57 total yards and two first downs, Robinson found wide receiver KaVontae Turpin in the end zone for a 31-yard touchdown to put the Frogs up 14-10 with 11 minutes remaining in regulation.

The touchdown capped an 80-yard drive, TCU’s longest of the game.

It did not take long for the Red Raiders to regain the lead. Just four minutes removed from Turpin’s touchdown, Duffey put the team on his back and rushed for a 38-yard score to put the Red Raiders up 17-14. Duffey’s touchdown was the final score of the ballgame.

“They had a nice call in the last one on the run,” Patterson said. “They caught us in a blitz and did a drag screen. You’ve got to give Coach Kingsbury a lot of credit.”

Up next, the Horned Frogs will welcome a rested, one-loss Oklahoma Sooners squad to Amon G. Carter Stadium.

“They are going to give us some eye-wash, some new things we haven’t seen, but it’s going to be a new week starting Sunday,” Banogu said. “We are going to game-plan and watch film to get ready to play the Sooners at home.”