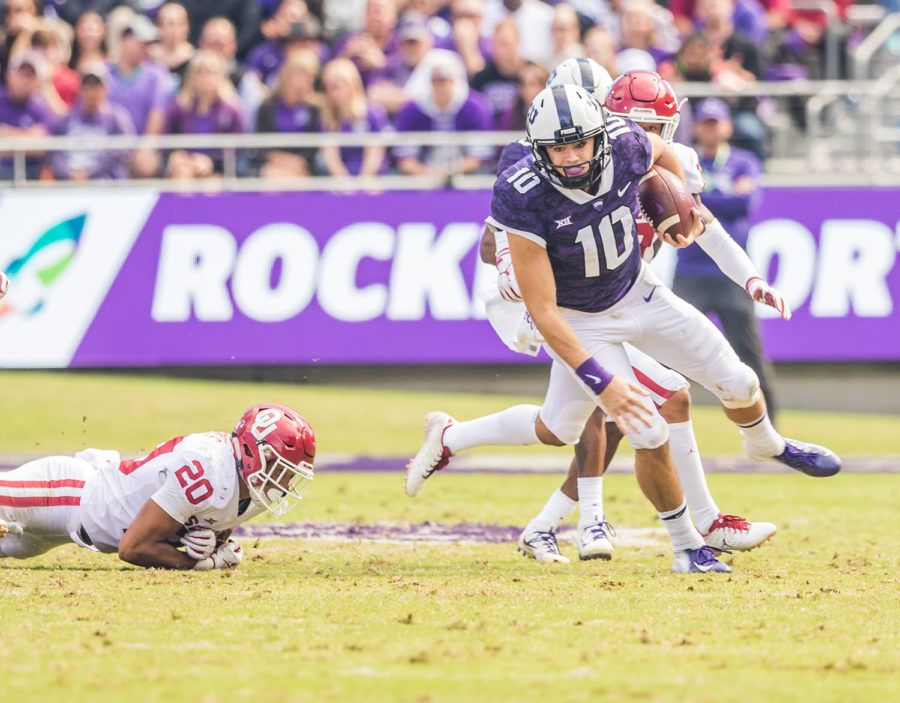 Despite trailing the Sooners by four at halftime, TCU football was unable to continue their first-half momentum as the top defense in the Big 12 allowed their highest point total of the season and fell to No. 9 Oklahoma, 52-27.

“The narrative of this game is Oklahoma played good,” said head coach Gary Patterson. “We only gave up seven more points than Texas did two weeks ago. We have to make better plays because we’re a better defense. I’m not going to give my defense any outs. Offensively, you can’t start slow.”

Oklahoma quarterback Kyler Murray was able to find open receivers from the start, completing 11 of his first 13 passes for 127 yards and two touchdowns. He hit wide receiver CeeDee Lamb for a 37-yard catch-and-run on what appeared to be a busted coverage in the TCU secondary as well as receiver Lee Morris for nine-yard strike in the back of the end zone.

“They ran a route that shouldn’t have been open,” said Patterson. “It’s because [freshman safety Trevon Moehrig-Woodard] didn’t run straight down the field with him. He’s going to be a really good player. He’s the one guy today that ran down Kyler Murray any time he had an opportunity to run down Kyler Murray. The game was not too big for him.”

However, a game of rock, paper, scissors between Lamb and fellow OU receiver Marquise following the first touchdown of the game forced the Sooners to kick off from their own 20 to one of the Big 12’s most dangerous return men in KaVontae Turpin. The senior took the kick back for a career-long 99 yards untouched for a touchdown. The return score was the first kick-off return the Sooners had surrendered since 2011.

“Turpin can light up a stadium, he’s awesome,” Patterson said. “You also have to give the group that blocked for him a great job on punts and kickoffs. We didn’t play well last week on special teams, but we played a lot better today. They gave us a great opportunity or they scored. That’s what you’re looking for in your special teams.”

Turpin’s burst was sandwiched between three punts by the Horned Frogs as the Sooners found the end zone on their first four possessions, building a 21-point lead, 28-7, with 8:25 to play in the half.

The Penn transfer sparked a run of 17 consecutive points for TCU. The sophomore was inserted into the contest and three plays later, he hit Turpin on a 41-yard screen pass down the left sideline, which cut the lead in half, 28-14.

“It helped, just having those guys like him make plays around me,” Collins said. “They just boost my confidence, they can take it all the way at any time and that was pretty cool.”

On Collins’ next pass, he found wide receiver Jalen Reagor for a 33-yard scoring strike in the back of the end zone, which trimmed the Sooner advantage to seven.

Patterson’s defense continued the momentum, forcing back-to-back punts, which allowed the Horned Frogs to add three more points before the half, as the Horned Frogs walked into the locker room down just four, 28-24.

However, the Sooners regained control in the second half, outscoring the Horned Frogs by 21, 24-3.

Murray finished with 213 yards passing and four touchdowns through the air to go along with 51 yards on nine rushes. The Sooner running back duo of Trey Sermon and Kennedy Brooks combined for 323 yards rushing and three scores as Oklahoma racked up 536 yards of total offense.

Both rushers eclipsed 100 yards on the ground, the first time that’s happened against a TCU defense since 2016, when Kansas State’s Justin Silmon and Jesse Ertz accomplished the feat.

“They have some physical running backs, OU always does, but it’s not that we can’t tackle them, we could do better at it, but they definitely ran hard and gave us their best,” linebacker Ty Summers said. “They just have a bunch of difference-makers across their team at the skill positions, a physical offensive line so that makes them a threat as one of the top teams in the nations. When you play a team like that you have to meet that level with that kind of intensity, and we weren’t able to today.”

Collins had a much rockier second half after suffering a blister on his throwing hand after he stiff-armed an Oklahoma defender at the end of a seven-yard run.

Following the blister, Collins was just three of 12 passing with an interception on his own 12, and eight of his final nine passes were incomplete. His one completion was for a loss of four yards. Overall, the sophomore finished seven of seventeen passing with 142 yards, two touchdowns and one interception.

“I thought he came in and managed the ballgame pretty good for a guy who hadn’t been in that much, and that’s a high-level team that he played against,” Patterson said.

Collins didn’t think as highly of his performance as his coach did.

“I wouldn’t call it that much success, we still lost, so I’m just focused on what the team is doing,” Collins said. “All season I’ve been preparing like I’m the starter, staying in the film room and in practice expecting that I’m going to go in, so I have to be ready to go out and play.”

Patterson refused to talk about there being a quarterback situation between Robinson and Collins.

“I’m not going to make it about a quarterback controversy… now, we have to go beat Kansas,” Patterson said. “The bottom line is we got beat 52-27, so we’re 3-4 and we have quite a road to battle back. We have to play at Kansas, a place where we haven’t played overly well.”

The Frogs will travel to Lawrence, Kan. to face the Jayhawks next Saturday, Oct. 27. Kickoff is scheduled for 2 p.m.