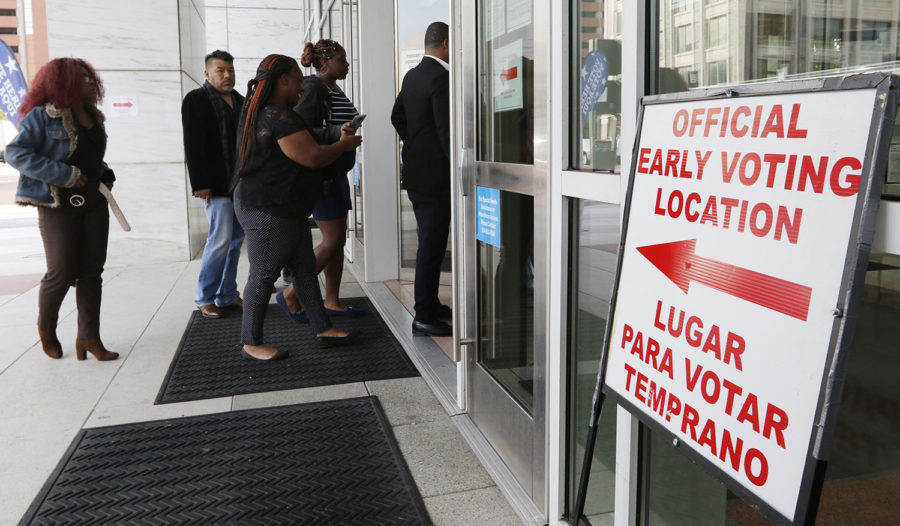 More ballots have been cast during the first week of early voting in Tarrant County for the 2018 election than all early ballots in the 2014 election, according to the Tarrant County Board of Elections.

By the time precincts closed on Friday, more than 195,000 voters, roughly 10,000 more than in the 2014 election, have gone to the polling stations. This has lead to unusually long lines for some voters like Ken Price.

Price, a consistent early voter, said the first day of early voting this year was anything but typical. “It was a day of madness. I got there around 9 a.m. Monday and there was a line out the door. It took me about 40 minutes to get through,” he said.

Turnout for this election has been record breaking with almost 42,000 votes being cast on Monday alone. Precincts saw an increase of voters Tuesday with over 438,000 ballots before a decline on Wednesday with a slight uptick Thursday and Friday.

One potential factor in the increase of early voters could be the tidal wave of ads across social media platforms like Facebook and YouTube from Democratic Senatorial candidate Beto O’Rourke, encouraging supporters to vote early.

The message reached Tarrant County voters like Nancy Miskell and her daughter who voted early for the first time Tuesday.

“I took the day off from work just to go vote” said Miskell. “I fell asleep two years ago and didn’t vote in the general election. I thought that my vote didn’t really matter and my candidate was a shoo-in, but I can’t let that happen this time.”

Unlike Price, Miskell said the wait to vote was about 10 minutes and that it was a pleasant and orderly experience.

“Just the fact that everyone is energized on both sides has people thinking that their vote really makes a difference and that’s the way it should be” said Miskell.

O’Rourke’s push for early voting has caused some voters who would traditionally vote on Election Day, like Rachel Herrera, to consider voting early.

Herrera, a student fellow for the Beto campaign, said she enjoys “the feeling and the energy of voting on Election Day,” but that she felt this election was too important not to vote early.

Cantrell said “I waited until Election Day in 2016, but this time I didn’t need more time. I had already made up my mind.”

With 17 percent of Tarrant County’s registered voters deciding to cast their ballots early as of Friday, it’s uncertain what the overall impact will be for voter turnout on Election Day.

Early voting ends Friday, Nov. 2. Polls will be open from 7 a.m. to 7 p.m. Monday through Friday.

Update: The 2018 midterm election has had a higher percentage of voter turnout than in the 2010 and 2014 midterms with 28 percent of all registered voters in Tarrant county casting their ballot as of Oct. 30.