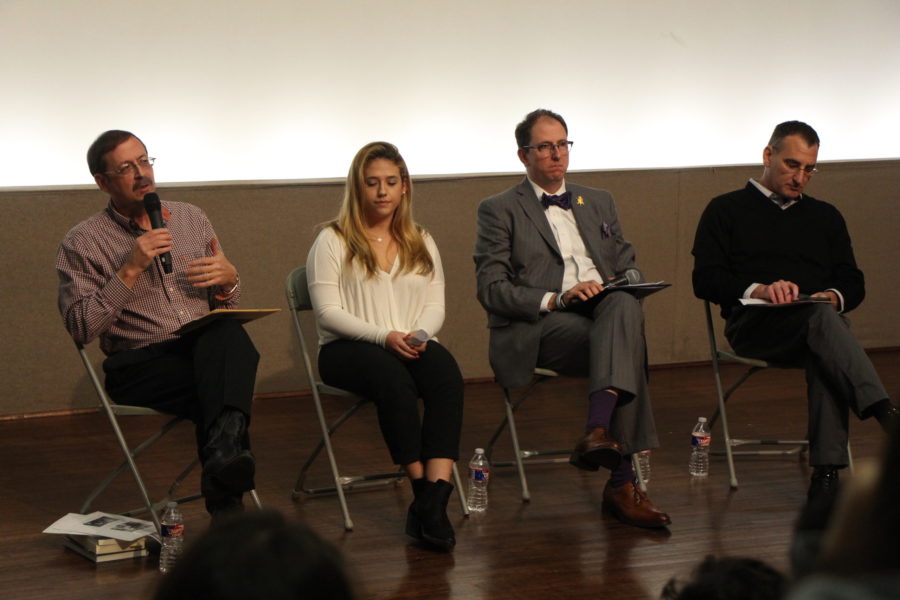 Dr. Scott Langston served as the mediator of the discussion, asking questions of a student, a staff member and a leader of the local Jewish community. – Photo by Renee Umsted

Three members of the Jewish community at TCU and in Fort Worth spoke about anti-Semitism in America Tuesday evening, sharing their experiences and giving suggestions about what needs to be done to combat hatred.

The event, organized in the aftermath of the attack on the Tree of Life synagogue in Pittsburgh Oct. 27., drew about 120 students, faculty and staff to Moudy North. Moderator Dr. Scott Langston, a religion instructor, read the names of the 11 people who died in the shooting and then called for a moment of silence.

The Pittsburgh shooting was not the only attack on Jews present on the minds of the Jewish community. Nov. 9 was the 80th anniversary of Kristallnacht– “the Night of Broken Glass” — the night on which thousands of Jewish businesses, schools and homes, as well as hundreds of synagogues were destroyed or vandalized. In addition, about 30,000 Jewish men were sent to concentration camps.

The panel included Viola Clark, a first-year student and president of TCU Hillel, Bob Goldberg, the executive director of the Jewish Federation of Fort Worth & Tarrant County, and Heath Einstein, the director of admissions.

When asked about the shooting at the Tree of Life synagogue, both Clark and Einstein said they realized they and their families could have been the victims.

Einstein talked about “Jewish geography,” the idea that an event that affects an individual also impacts the entire Jewish community.

First-year ballet major Janet Nguyen said she was surprised that violence and anti-Semitism are still common even in the U.S., a developed country that advocates for diversity.

The panel members also gave their ideas about how anti-Semitism manifests itself in the United States in ways aside from violence, saying the internet and social media can be used both as tools to educate people and as vehicles for the spread of hateful speech.

Goldberg said the climate in the country is one that allows for intolerance and people tend to reject any idea that is not their own.

After sharing personal stories about times when they have experienced anti-Semitism, the discussion leaders provided the audience with strategies for being welcoming and tolerant.

Clark said people should treat each other as members of the same family and not be afraid to ask questions because people like her are willing to answer those questions.

Goldberg and Einstein talked about the importance of calling out hatred and ignorance.

“You have to speak up,” Einstein said. “You’re obligated to speak up.”