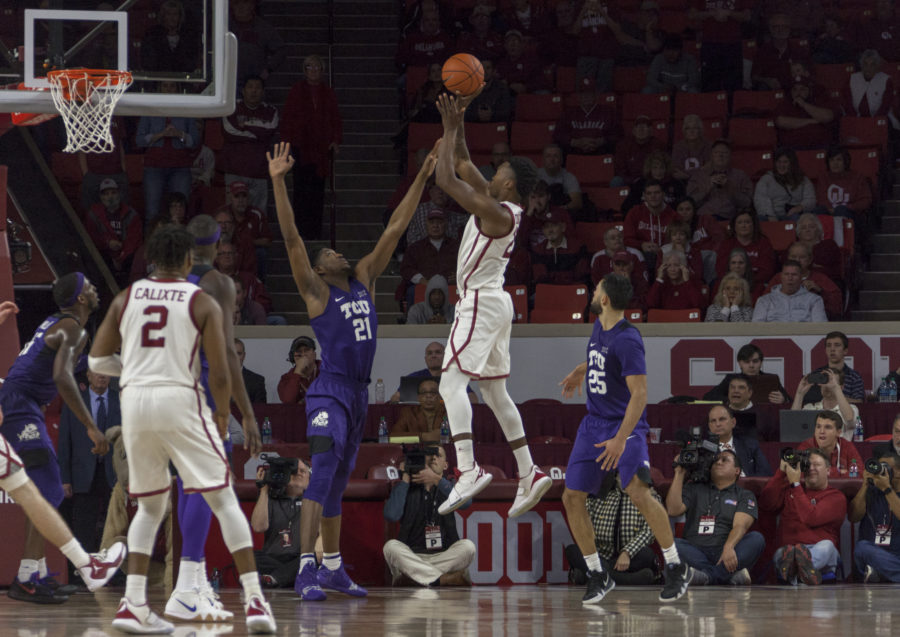 Despite a career-high 30 points on 8-12 three-point shooting from Kouat Noi, TCU men’s basketball fell to the Oklahoma Sooners 76-74 Saturday, dropping to 1-2 in conference play.

“He did a lot of great things, hit the shots and set the screen on the play to tie it up that got Alex [Robinson] a wide-open look,” TCU head coach Jamie Dixon said. “Obviously we felt could’ve and should’ve won the game, but we didn’t.”

The loss drops No. 25 TCU’s road losing streak against ranked opponents to 48 games.

“We have to defend better, 49 percent from the field for them was clearly the difference,” said Dixon. “We had opportunities, our execution down the stretch was pretty good with our three three-pointers out of timeouts with plays that we ran, but we didn’t get the stops we needed to get.”

The Sooners made 17 of their 25 free throw attempts while the Horned Frogs converted on 12 of their 16. TCU shot 35 percent from the floor while Oklahoma hit on 49 percent of their looks from the field.

“It is difficult, but we have nobody to blame but ourselves,” said Robinson. “They shot a high percentage from the field, it’s not what we thought our identity was coming into Big 12 play. We have to do better defending.”

The key statistics Dixon lamented about following his team’s second-straight, single-digit road defeat was rebounding and second-chance points. Despite outrebounding the Sooners 42-36 with 17 offensive rebounds, they only scored eight points off their extra opportunities.

“We have to finish better, finish stronger, and not look for calls,” said Dixon. “We need to a better job finishing through contact.”

The first half was a back-and-forth affair until Noi caught fire. He sparked a 13-0 TCU run in which he drilled three consecutive shots from behind the arc. Guards Desmond Bane and Robinson would cap the run with lay-ups, which put the Horned Frogs up nine, 36-27, with 6:29 remaining in the half.

TCU would take a six-point lead into the locker room, 43-37, but the Sooners scored eight of the first nine points to begin the second half, which evened the contest at 44 with 16:11 to play.

Oklahoma took their first lead of the second half at 48-47 with 13:45. All five Oklahoma starters scored during their 11-4 run. Noi would return the lead to TCU, 52-51 after hitting his sixth three-pointer with 11:17 remaining.

TCU secured a 71-69 lead with less than a minute to play, but a turnover by guard RJ Nembhard resulted in a three-point play for Sooner guard Christian James after converted his running and-one lay-up. James finished with 15 points and eight rebounds. Trailing by three, 74-71, and the clock winding down, Robinson drilled the game-tying three-pointer from the top of the key with 16 seconds remaining. Robinson finished with 16 points in addition to eight rebounds and four assists.

Oklahoma answered with forward Kristian Doolittle banking in a jumper from the right block with 2.8 seconds, which gave him 24 points to go along with 10 rebounds.

“It’s disappointing to us as we’ve gotten beat in the post the last two games with Lawson and now Doolittle,” Dixon said. “I’d like to be more physical, but we had guys in foul trouble, which is a challenge. Our defense was good at the beginning of the year, but it’s let us down the last two games and it wasn’t good enough in the win against Baylor. Doolittle went at us with a lot of post-up finishes around the rim and he drove it to the rim as well. Give him credit.”

In the final seconds, guard Kendric Davis attempted a running three-point attempt for the win but it grazed the front of the rim. Noi inbounded the ball to Davis and said the play was designed for him to get the ball back, but there ended up simply not being enough time on the clock.

“There’s not a lot of time with 2.8 seconds, we got a shot at the rim, which was a pretty good look considering the timing of it all,” Dixon said. “They trapped the ball, which we knew would happen, Kendric split it and got as good of a look as you could get with how much time we had.”

TCU’s next opportunity to snap their two-game losing streak is Tuesday back at Schollmaier Arena against West Virginia. Tip-off is set for 6 p.m.