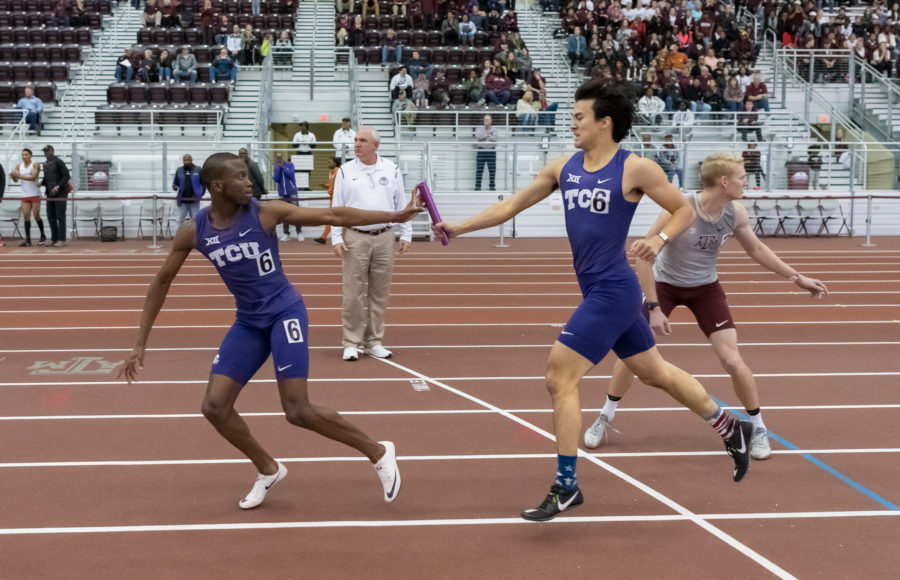 TCU's Derrick Mokaleng and Blake Hennesay compete at the Texas A&M Triangular in the Men's 4x400 earning them the number 7 spot in the nation. Photo provided by TCU Athletics.

The last time the Horned Frog Track and Field teams traveled to College Station they had no nationally ranked athletes. Things are different this time.

Competing in the Charlie Thomas Invitational hosted by Texas A&M, TCU hopes to watch their two nationally ranked athletes and nine top-10 Big 12 athletes rise in the rankings, while hopefully adding others to the list.

Derrick Mokaleng ran a season-best 46.34 in the men’s 400m dash last weekend, earning him a No. 7 national rank. This weekend’s event will include four top-10 national performers led by Bryce Deadmon of Texas A&M, who finished second at the Texas Tech Classic with Mokaleng taking third. Deadmon’s 45.93 performance sets him at No. 2 in the nation. Behind him in the NCAA rankings and also in attendance this weekend are Texas’ Jonathan Jones (5) and Houston’s Kahmari Montgomery (6).

Another event which is expected to have a strong showing by TCU’s Chengetayi Mapaya is the men’s triple jump. In his season debut at the Texas Tech Classic, Mapaya produced a 16.31m jump, earning him third in the event and sixth in the NCAA. His jump was three inches short of his third-place score at the 2018 NCAA indoor championships.

Despite a tough competition last weekend which featured 11 nationally-ranked teams, the women’s 60m sprinters advanced all three entries to the semi-final round. Jenea Spinks ran a 7.48, ranking her fifth in the Big 12. Destiny Longmire sits at No. 6 in the conference with her 7.51 finish and Hope Glenn rounded out the group with a 7.57.

Both the men’s and women’s 4x400m relay teams enter the weekend nationally ranked.

The men’s team, featuring Derrick Mokaleng, Blake Hennesay, Emmanuel Ogwo and Glenn Bender find themselves ranked eighth in the NCAA. They will close out the meet on Saturday evening competing against three other nationally-ranked relay teams. Houston’s team holds the top spot, running a 3:03.75. In the second spot is Texas A&M, who won the event at the Texas Tech Classic.

The women’s relay team had their season-best 3:38.68 at the Texas Tech Classic, ranking them fourth in the Big 12 and 17th nationally. Lily Beckford, Kiana Banks, Kayla Heard and Kennedy Crawford, who placed fifth last weekend, will see similar competition as they race against the No. 2 Texas A&M team who rank third nationally.