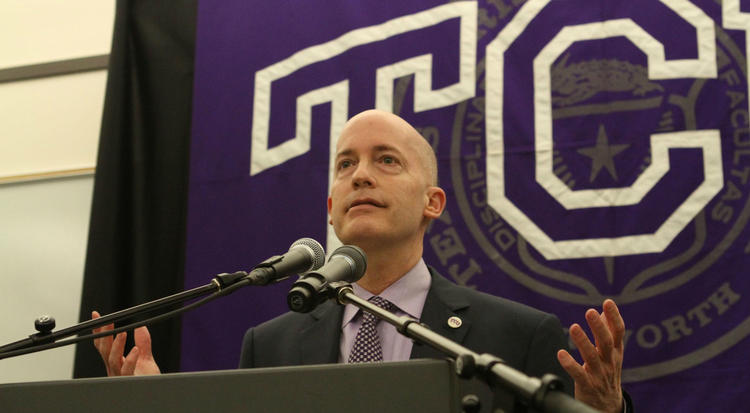 Chancellor Boschini speaks at his annual town hall in March 2013. Photo by TCU 360.

Chancellor Boschini speaks at his annual town hall in March 2013. Photo by TCU 360.

Chancellor Victor Boschini and the Board of Trustees met a week ago to discuss a number of topics ranging from construction updates, to parking issues, tuition increases, enrollment capping, Diversity, Equity and Inclusion, the potential addition of a Student Trustee, TCU and North Texas’ joint medical school venture and the status of the university budget.

Over the years, TCU has been referred to as Texas Construction University. This year, the Neeley School of Business, the fine arts building, the performance hall, two residence halls and the eastside of Amon G. Carter Stadium are under construction. All but one – the stadium – are on schedule.

“We couldn’t get it closed in before the rains hit this fall, so we lost 32 to 52 days of construction to rain or wind,” Boschini said. “That project is affected by wind because it’s so high, but now they’re saying it will be closed in by June 1 and then it’ll go a lot faster once the walls go up.”

Despite a promise that the stadium will be ready by the Horned Frogs’ Sept. 28 home game against the Kansas Jayhawks, Boschini is cautious.

“I’m saying it’ll be ready by our fifth home game,” he said.

As for the dorms near the King Family Commons, students have requested to live in them via the on-campus housing lottery, so the dorms have to be open for business next fall.

“Absolutely, it’s not an option since the students have already decided who is going to live in them through the lottery,” Boschini said. “One is called Richards Hall and the other one has an ask out for it and I’m waiting to see if they say, ‘yes.’ ”

Boschini said he and the board discussed a primary campus lament: parking.

“I’d say in general parking is a no-win because everyone wants a space right where they want it,” Boschini said. “We have more spaces than the amount of parking permits we’ve distributed, so in theory there is a space for everyone, but it’s not where you want it. I totally get that.

“We have to work on that. That’s one of the reasons the board said let’s slow down on any of these new building projects besides our existing ones so we can take advantage of the ability to assess what we have parking-wise. After the fine arts and music building open up, there will be a sea of parking around there. Let’s see how all this works.”

One solution that’s been discussed is building up like in New York City, constructing more parking garages, but that method will likely not be utilized.

“I’ve also been going to conferences where they’re saying we won’t need parking spaces in 10 years and that we shouldn’t build parking garages because we’ll need to convert your parking garage into other things,” Boshini said. “The theory is that people won’t have cars. They’ll just use individual ones like Lyft or Uber or ridesharing, so we don’t have the answer for that at this point. I do know it’s a problem and I acknowledge that for students. I get it.”

This year TCU had the largest first-year class in school history, a fall enrollment of 2,194.

“We told the board we’re right on track to have 9,500 undergrads, because this year we had over 9,500 undergrads since we had that huge freshman class, more people accepted their acceptance decision than the university calculated,” Boschini said. “It won’t affect the university because we won’t grow anymore, but what it will mean is that we can keep the 1-to-14 student to faculty ratio. Our goal is to never go over 1-to-14, because we want TCU to be a place where I can know you.”

Despite TCU admissions dropping the acceptance rate to the lowest in school history, the department was still overwhelmed by more acceptances than anticipated.

“I don’t know how we avoid the surprising, bigger-sized freshman classes,” he said. “I really don’t. We accepted fewer applicants than ever before last year. We only want 1,850, but we ended up with 2,100. It’s a good problem to have, but it’s a problem.”

In the last two years, the tuition increases have been 4.5 and 4.9 percent, raising TCU’s yearly cost to $49,160 based on 12-18 hours of enrollment according to the Office of Financial Aid. It doesn’t seem likely that the cost of being a Horned Frog will hault its upward trajectory.

“I always say, ‘No, I don’t see tuition being capped,’ but I could see it not going up as much every year, but the reason why it has to go up every is if you want to give raises and benefits to the faculty and staff each year and as long as students to continue to want more things, which they always do, I don’t see how we could ever freeze it,” Boschini said.

After 77 percent of the faculty approved a motion to implement a DEI component to the core curriculum, the Faculty Senate Executive Committee will bring in representation from all schools and colleges by the end of the semester and a board committee will vote on the final implementation.

Now, the discussion becomes how to add the component to the curriculum.

“If it were up to me, I would make it a double or triple dip with other core classes because to make it a seperate set of courses would mean you’d have to be here for nine years,” Boschini said. “That would be too long. I do think DEI is very important for everybody, but I do think it is more important to teach it the way we teach writing across the curriculum courses because it affects every course and everything we do.”

At the most recent board meeting, the student relations committee submitted a proposal to have a student trustee on the board. The timetable is such that the chair of the board will appoint a committee to study the idea and then report back.

“Here, we have a really robust committee system where most of the work gets done anyways and students, faculty and staff are in those committees anyways,” he said. “So, I don’t think it’s really that important, but symbolically there are people who think it’s very important. I think it’s definitely worth studying.”

“We had over 1,400 applications for our 60 slots and we interviewed 408 candidates over five Mondays with about 80 applicants each day to pick the 60,” Boschini said. “They’re in the process of picking those 60 right now. They’ll start in June.”

Boschini said even though the applicant pool was smaller than anticipated, the joint venture between TCU and UNT is comparable to that of the Dell Medical School at University of Texas at Austin.

“We’re very excited, so that was a big day,” he said. “That pitch of the entire first class have their entire time paid for certainly paid dividends for us.”

In a word, the Board and the Chancellor described the university budget as, “excellent.”

“They felt that way because TCU’s budget is balanced as we’re entering our 150th year celebration coming up and they want to make sure there’s a TCU 150 years after that,” Boschini said. “The number one thing to ensure that is to build the endowment and nothing else. That’s the hardest thing to do. Save money and don’t build buildings and other things. We’ll likely examine a more fiscally conservative approach after this round of construction concludes.”