The goal of TCU’s first-year experience is simple: to make sure incoming students feel at home and find their way.

For Trung Nguyen, assistant dean of TCU’s Student Development Services, assuring this for the maximum number of students is personal; his first semester of college was one of trial and error as he struggled to balance schoolwork and student activities.

An immigrant from Vietnam and a first-generation college student, Nguyen and his parents were unaware of American college rituals. They had gone with his older brother, Don, to his college orientation and move-in a few years earlie, so felt it unnecessary to join Trung.

He drove an hour from home, by himself, to move in at State University of New York at Oswego.

That day, he waited for a roommate who never showed up. Classes hadn’t even started and Trung was already wondering if he had made the right choice.

“It was something that will always help me resonate with the work I do here with students,” Nguyen said.

“I don’t want to ever have a student sitting in a room alone their first night of college ever doubting themselves again.”

This experienced shaped Nguyen, as students on campus know he has a heart for the underdog.

“Trung treats you as an equal, even though he’s way above us,” Frog Camp Director Canali Miller said. “He talks to you like he believes in you.” 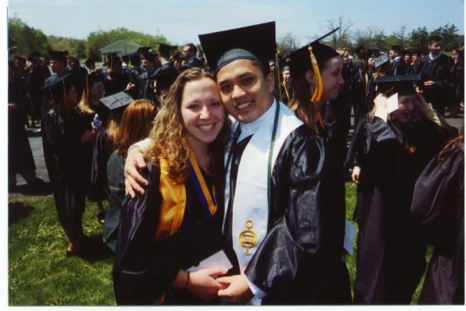 Trung’s first months in college were rough as he struggled socially and academically.

By the time he turned to his hall director and resident assistant for help, he had lost his scholarship and it was only the end of his first semester.

“It’s hard to ask for help when you don’t even realize that you had a deficit,” he said. “My whole first year of college was such a huge learning process that it led me to be interested in focusing on the first-year experience to set students up for success for the next three years.”

Nguyen credits his success to his mentors and staff who encouraged him to become more involved in student affairs as an RA, orientation leader and in student government.

All of these experiences taught him responsibility and the value of leadership, he said.

He uses his first-year experience to teach students that they are going to face crisis, challenges and obstacles in life. He wants them to be prepared to deal with problems.

“You control how you respond,” Nguyen said. “If you allow the obstacles and challenges in your life to dictate how you live, you give control to those external forces that impact you. Identify what your goal is and then break it down into smaller tangible things to take advantage of all of your opportunities.”

But first-year students aren’t the only ones who look to Trung for guidance. His colleagues in Student Development Services have also turned to him when they face difficult situations.

“Trung is never one to tell you exactly what to do,” said graduate assistant Briana Denham. “He guides you to think about the best decision and what you yourself feels is the right thing to do.”

During his final RA training as a senior, his hall director asked, “What are you doing when you graduate?” 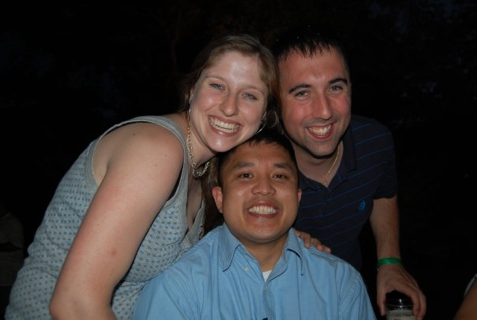 Cellini and Trung talk weekly, catching each other up on their personal and professional lives. Photo courtesy of Trung Nguyen.

He and Todd Cellini, who was 24 at the time, had become friends through work and over games of racquetball.

“I was 23 at the time and our closeness in age and common interest in sports and shows connected us,” Nguyen said. “We still talk weekly.”

As a public justice major and forensic science minor, Nguyen was leaning toward law school or law enforcement, but Cellini saw something else.

“Trung was somebody who was more mature than the average senior,” said Cellini, chief academic and operations officer at Spartan College of Aeronautics and Technology. “He was sponging for knowledge and kept asking the ‘why’ questions behind things.”

Cellini knew Nguyen was a natural for higher education. He began introducing Nguyen to people through conferences and meetings.

“Over our 18 years of friendship, I’ve watched Trung’s versatility transcend and articulate to stakeholders ranging between an upset parent to the chancellor,” Cellini said. “You have to be student-centered, and there’s no one more student-centered than Trung.”

A craving for school spirit and competitive athletics drove Nguyen to search for new opportunities outside of the Northeast. In 2012, he took a leap of faith and came to TCU.

Student Development Services welcomed Nguyen to TCU as the assistant director of the First-Year Experience and placed him in charge of Frog Camp.

“The highlight of my job is the one-on-one conversations I get to have with students. It’s what keeps me grounded and gives me energy and focus on long days.”

Nguyen focuses on working with students, getting to know who they are and what they want to do with their life so he can connect them with the right tools on campus to help them get interviews, internships or outside resources.

“It only takes two seconds for a college student to change their whole life trajectory and all it takes is asking them the right question,” Nguyen said. “I want to know more about students, where they came from, what inspires them. The greatest gift I can give them is my time.”

“I think at the end of the day that’s why I work in student affairs because I want to be a part of a student’s journey through these four years.”