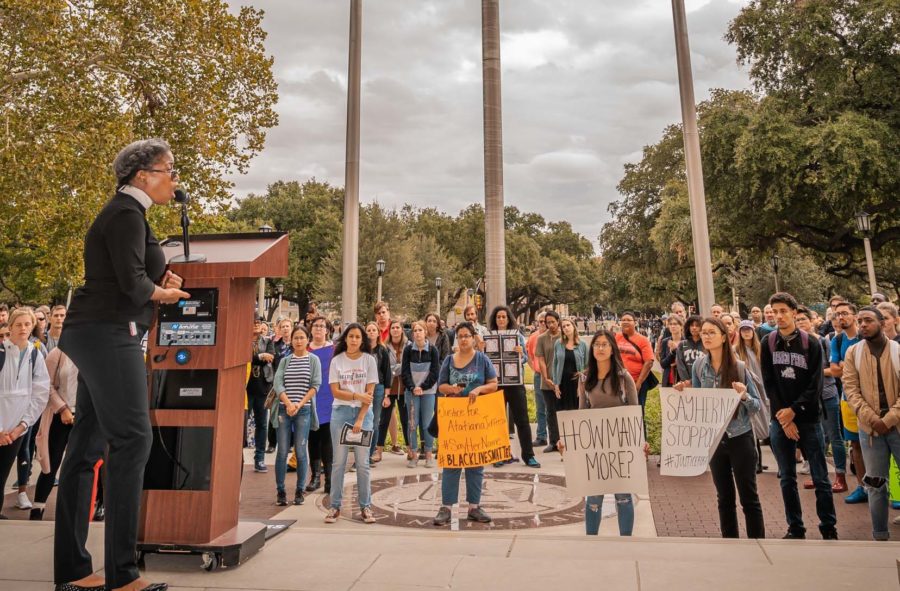 Students, faculty and staff gather outside of Sadler Hall to protest police brutality. The rally happened Thursday at 12 p.m. Photo by Cristian ArguetaSoto.

Nearly 100 people gathered in front of Sadler Hall Thursday to talk about race and class in Fort Worth and what TCU’s role should be in improving the city’s climate.

The protest, which began in front of the Founder’s Statue, was the TCU community’s first public response to the shooting death of Atatiana Jefferson by a Fort Worth police officer inside her home on Oct. 12. 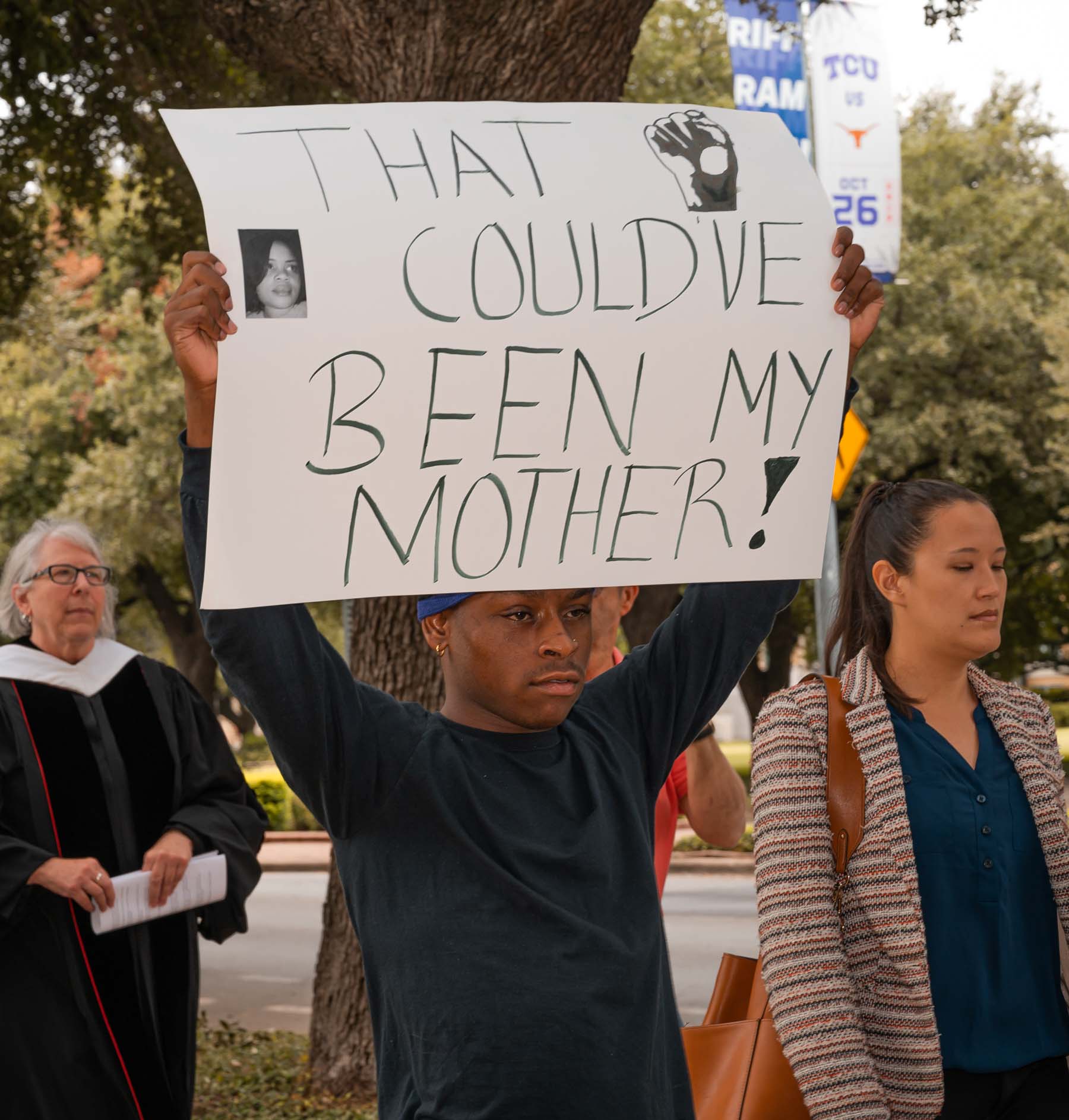 Hammad, who is the director of Middle Eastern studies, said the protest was meant to break TCU’s silence on injustice and show support for black students, faculty and staff.

“We’re protesting police brutality and the criminalization of black bodies,” Hammad said. “We are protesting the racial injustice, the socioeconomic injustice and also the silence of TCU about these issues.”

Junior comparative race and ethnic studies (CRES) major Jazmin Rosales, who participated in the protest, said police are targeting black and brown people and there is no justice served when they are killed by the police.

She also said they hope to gain a sense of community in support of black people from the protest.

“I want black people on campus to know that we care, and we love them,” Rosales said. “This is not something done out of rage or hate. This is out of love for community and wanting to heal and be together and I, as a Latina, join and support my black brothers and sisters.” 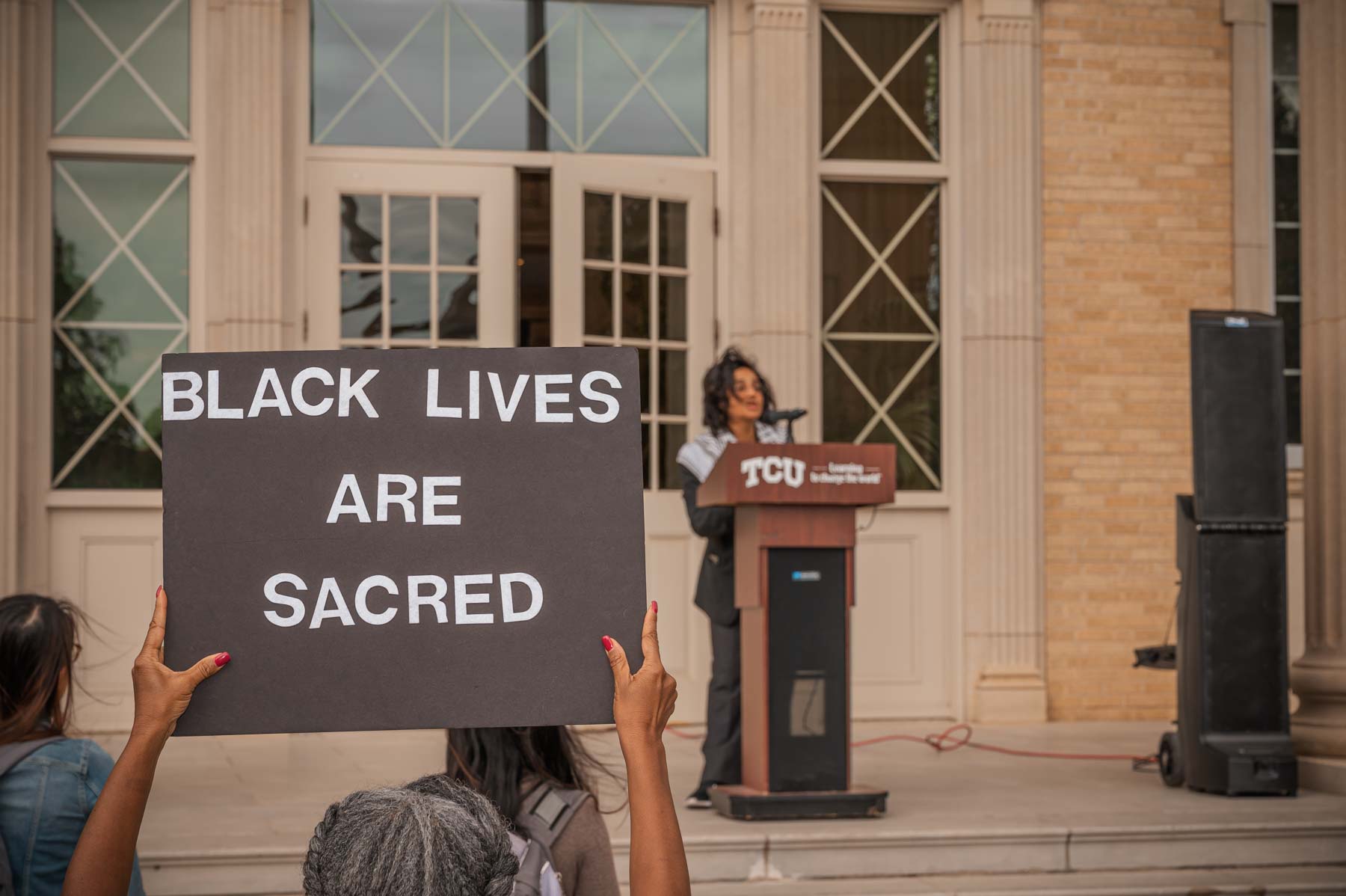 Dr. Hanan Hammad initiated and organized the protest. She is pictured above. Photo by Cristian Argueta Soto.

Some teachers adjusted class schedules to allow students to attend the protest without being counted absent.

She said we, as a country, need justice and police reform.

A TCU student who asked to remain anonymous because of possible backlash said he feels the protest was a publicity stunt preceding the launch of TCU’s ‘Lead On’ campaign.

“I think you must first look at your own in-house issues, and it raises a lot of questions and flags when the audience in which you’re speaking to for the cause in which you’re advocating for, does not reflect the individuals directly impacted by the instance itself,” he said. 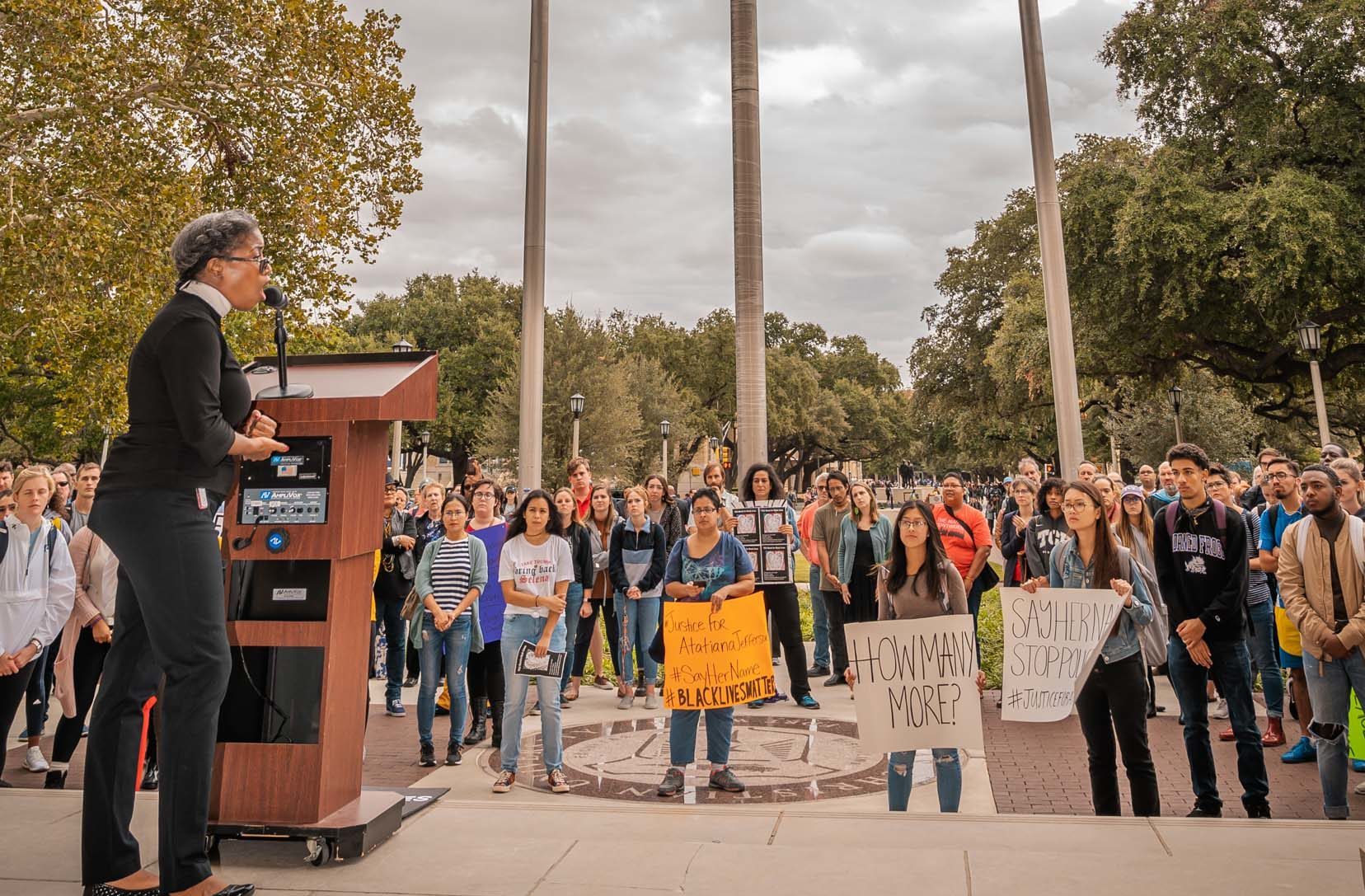 Students, faculty and staff gather outside of Sadler Hall to protest police brutality. The rally happened Thursday at 12 p.m. Photo by Cristian ArguetaSoto.

Angela Mack, a Ph.D. student and graduate instructor, spoke at the rally. The Fort Worth native said she hopes for the visibility of people of color in the TCU community and movement beyond the university on TCU’s behalf.

Mack is challenging her students to get involved in the Fort Worth community to bring awareness to these issues. She said people in her neighborhood are trying to help Jefferson’s family.

There will be a march debrief and organizing meeting in the Lizard Lounge near Bistro Burnett in the library beginning at 5:30 p.m. for students who want to speak more about the protest.