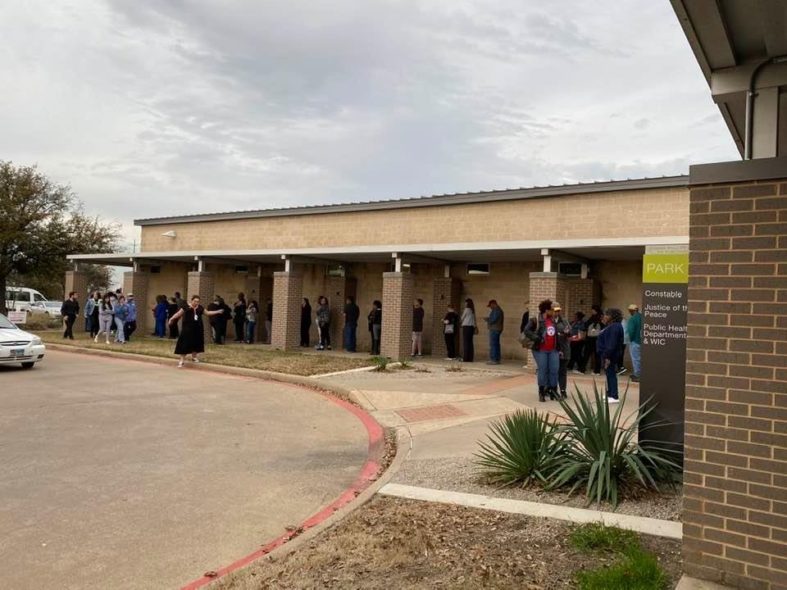 Voters wait in lines stretching out the building at a polling site in South Fort Worth. Photo courtesy Amiso George

Part of why many Texans had to wait in long lines to cast their ballot Tuesday was because of strong voter turnout on both sides.

More than 4 million Texans cast their ballot in this year’s primary elections, and turnout was nearly equal for Democrats and Republicans.

“Turnout in the 2020 Democratic primary shattered our expectations, with over 2 million Texans making their voices be heard,” said Manny Garcia, the executive director of the Texas Democratic Party.

The 4,084,431 votes cast was the third most in a primary since 2000 but the first in which both parties eclipsed 2 million votes.

The Republican voter turnout was especially strong, given they have an incumbent president.

“The overall message is just how excited Republicans are and the hard work we are doing to prepare for victory in November,” Republican Party of Texas chair James R. Dickey said on the “Let’s Talk Texas” podcast.

“Texas is the biggest battleground state in the country,” he said. “The energy among Texas Democrats will carry us to victory up and down the ballot in November.”

The strong turnout from both parties was foreshadowed in the 2018 midterms when Texas saw an 18% increase in turnout, according to the United States Election Project.

Both parties will look to keep the increases going in November.