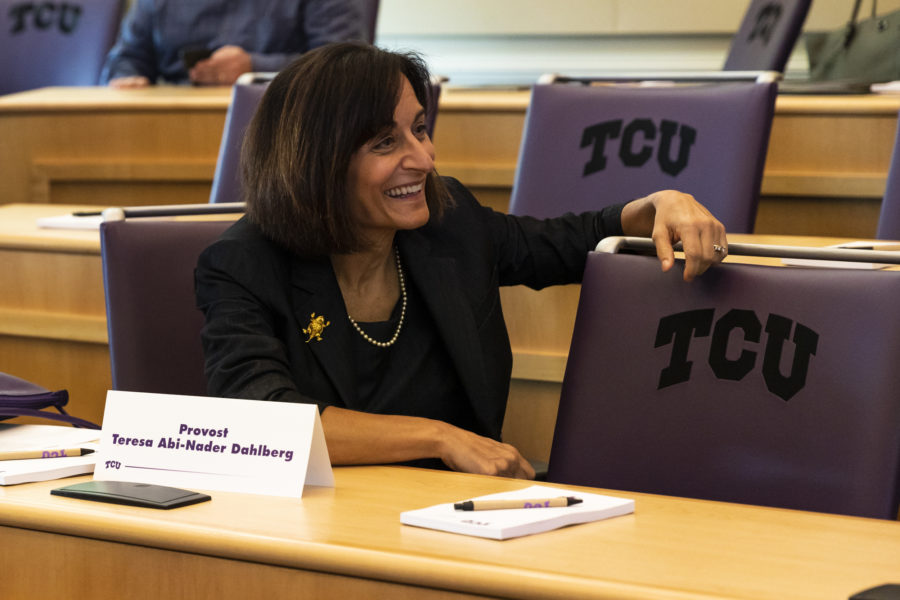 Online teaching and another semester without breaks are expected in the spring as TCU continues to adapt to the COVID-19 pandemic.

At Thursday’s virtual Faculty Senate meeting, Provost Teresa Dahlberg told about 200 attendees that next semester, faculty will have the option to teach online or in the classroom, and there will be no holidays.

Dahlberg said the academic calendar for the spring should be finalized in the coming days and will end “right about the normal time.”

Chancellor Victor Boschini also spoke at the meeting, explaining the budget shortfalls and the COVID-19 situation on campus.

He said enrollment for the school year fell 2% below budget projections, creating a $5.5 million shortfall. However, Boschini said the university’s projections were between 20% and 40%, so it could have been worse.

Boschini also said it cost around $65 million more than usual to get students to campus because of hardships families are facing.

“A lot of kids who used to be able to qualify for loans no longer can,” Boschini said. “Last year we were at a 38% discount rate. I bet we are going to end up at 48%.”

The chancellor believes that although the change was influenced by the times, it is a good thing that TCU is starting to give more aid to students.

“We probably should have been close to that all along because it puts us where our aspiring schools are,” said Boschini.

Addressing the COVID-19 situation, the chancellor said he believes the trend of declining COVID-19 cases will continue and more than 150 cases will be reported as recovered by Saturday.

Boschini also said no positive cases have been contracted in an academic environment.

“There have been no known cases to date contracted through classroom interactions,” he said. This includes students and employees.

Boschini also answered questions about whether TCU should have or should begin conducting mass testing on campus. He said it was not a good idea because it is not recommended by the CDC and provides only a snapshot in time.

“Mass testing uses resources that you could use for people who are sick,” he said.

Vote of no confidence discussed

The Faculty Senate meeting ended with a closed session that included a discussion on a vote of no confidence on the administration.

Talk about the vote was renewed by some faculty members due to ongoing concerns on several issues.

The vote was initially brought up over the summer and largely motivated because of faculty concerns about having to teach in person this fall. It was tabled by Faculty Senate Chair Sean Atkinson.

“Given that the administration capitulated on this issue rather quickly and has been reasonable about it since, including allowing us a choice again in the spring, the Faculty Senate executive committee feels that such a motion is no longer supported,” Atkinson said in the meeting.

However, he said there are still issues to address, including a lack of transparency in the budget process and a lack of action in addressing racial inequality on campus.