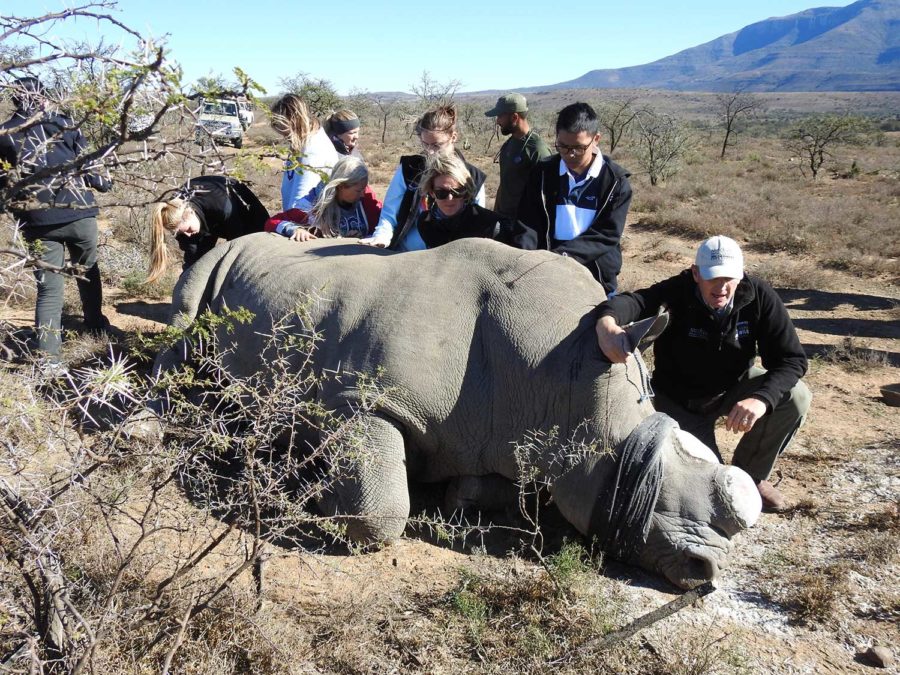 Students stand next to an anesthetized white rhino after assisting with a dehorning procedure in South Africa led by Dr. William Fowlds. Many of the students on the 2019 trip later helped found the TCU Rhino Initiative Club. (Courtesy: Dr. Michael Slattery)

The TCU Rhino Initiative Club will celebrate World Rhino Day on Sept. 22 with screenings and activities to raise awareness of the rhinoceros poaching crisis.

Collaborating with The Crew, the club will screen the short film, “Sides of a Horn,” which covers the rhino poaching crisis, at 5, 5:30 and 6 p.m. in the Brown-Lupton University Union Auditorium. The first 30 documentary watchers will receive free tickets to the Fort Worth Zoo.

From 5-6:30 p.m., the club will also be tabling with educational materials and merchandise in the Campus Commons and outside the auditorium and will feature free rides on a mechanical bull with a rhino horn attached. The first 30 bull riders will receive free kits with a rhino stuffed animal, socks and animal crackers.

The club was founded by students who participated in the TCU Rhino Initiative in South Africa, led by Dr. Michael Slattery, a professor of environmental science.

Slattery launched the initiative in 2014 to give students the opportunity to study abroad in South Africa and learn about the country’s wildlife and humanitarian challenges with a focus on rhinos.

He said he always wanted to do something in South Africa, where he grew up, in part because he has felt guilty about never returning to his home.

“I always wanted to try and find a way to give back,” said Slattery. “And when this opportunity came along, to start this initiative with funding from TCU, it seemed like a kind of natural fit for me.”

Every summer, Slattery takes a group of students to Amakhala Game Reserve in the Eastern Cape of South Africa, where they spend time with local communities and with renowned veterinarian Dr. William Fowlds.

“The initial goal was really kind of narrow around the study abroad,” Slattery said. “It’s accomplished a lot more than that in that we’ve been able to raise awareness and raise funding because wildlife conservation is expensive.”

The club has raised funds for rhino conservation by selling merchandise and through registrations for its annual 5K Rhino Run, which will take place in March.

Specifically, it has provided funds for rhino management procedures, drones and anti-poaching patrol units in Amakhala, along with awareness initiatives and community programs that bring local schoolchildren into the reserve.

“I look at rhinos in a similar way I suppose to forests in that one thing we have to do as quickly as we can protect as many as we can.”

Three or more rhinos are poached every day in Africa for their horns, which are valued in Asia as a status symbol and for use in traditional medicine, according to the International Rhino Foundation.

While rhinos are not keystone species with a disproportionate effect on the health of the ecosystems where they live, they still change their habitat by browsing or grazing to keep vegetation trimmed back. They have defense mechanisms to protect themselves from other animals, but Slattery said “they’re essentially defenseless against human beings.”

Amakhala is home to white and black rhinos, the latter of which are critically endangered, with just over 5,000 individuals remaining. 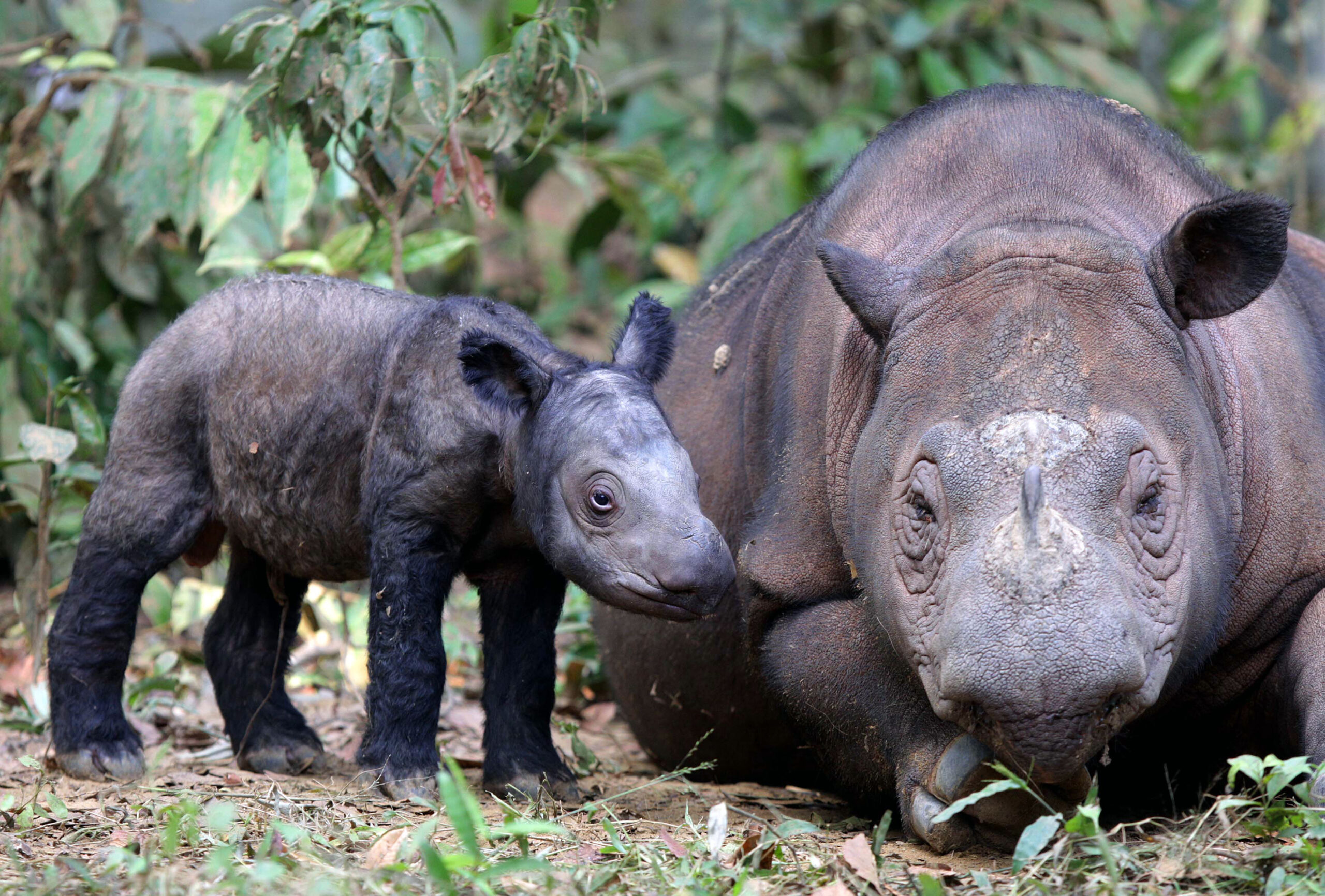 A female Sumatran rhino named Ratu, right, is seen with her newly-born calf at Way Kambas National Park in Lampung, Indonesia, Monday, June 25, 2012. Ratu, a highly endangered Sumatran rhinoceros, gave birth to the calf Saturday in western Indonesia, a forestry official said. It is only the fifth known birth in captivity for the species in 123 years. (AP Photo)

After traveling to South Africa in the summer of 2019, a group of TCU students came back with a mission: saving rhinos from extinction.

Katie Lawton, a senior environmental science major and president of the Rhino Initiative Club, has always loved animals but said her personal experience with rhinos led to a special connection.

“I think the biggest takeaway that most of us got from the trip was just the emotional aspect of it … I’ve always cared about endangered species, but until you actually go there and you see what’s happening, and we got to actually put our hands on a rhino as it was being dehorned, and that’s something you can’t really replace,” she said.

Julie Miler, a junior marketing and film double major who serves as the public relations coordinator for the club, said no trip affected her more than her study abroad in South Africa, where she was able to see the direct results of the donations.

“Well, I got to see the buildings, like the anti-poaching unit that was labeled right on it, ‘Sponsored by TCU,’ and the military-grade drone that they use to watch over the park and try and protect their animals from poachers,” she said.

Miler said the experience changed everyone’s perspectives so much that they wanted to keep doing conservation work after leaving South Africa.

Moving forward, though, Lawton and Miler said the club will expand beyond rhinos.

Miler said the club welcomes students who are passionate about all species.

“We want to help all animals, we’re all conservationists at heart,” Miller said.

More information can be found on the TCU Rhino Initiative Instagram page.