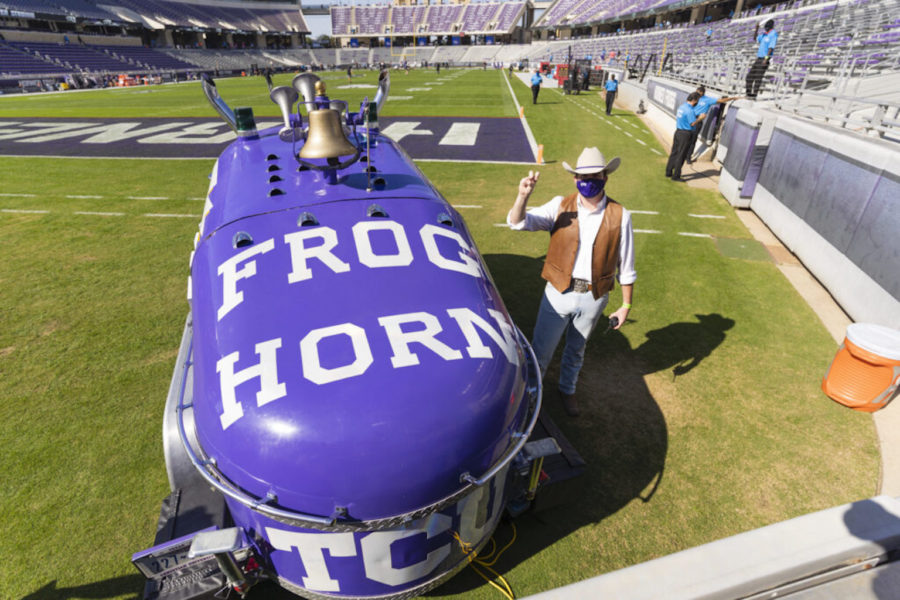 This football season has been different, nevertheless, one thing has remained constant at Amon G. Carter Stadium–when the Frogs score, the Frog Horn sounds.

The Rangers are the spirit group in charge of sounding the horn during TCU football games. Their job of keeping the crowd excited has only become more important with the limited capacity guidelines in stadiums.

The repurposed train whistle, which was introduced in 1994, is labeled the “ultimate noisemaker” and can be heard from well outside the stadium when TCU puts points on the board.

“Frog Horn gives a lot of continuity to sports this year,” said Jason Lesikar, the head coordinator for the TCU Rangers. “It generates a jolt of excitement because the horn’s level hasn’t changed, it’s still blowing at 100%.” 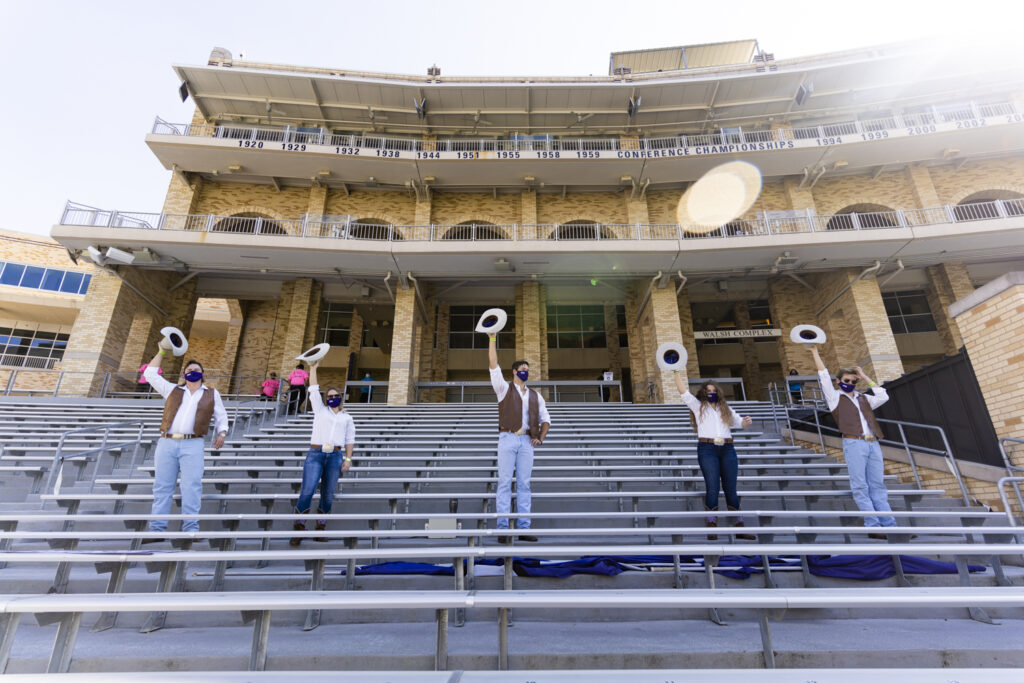 The TCU Rangers remain in the stands this year because of social distancing guidelines. (Heesoo Yang/Staff Photographer)

In addition to operating the Frog Horn at sporting events, the squad of 19 students raises field goal nets, runs on the field with spirit flags and shoots the t-shirt cannon.

“It took the first two months of the semester before we were really able to start delving into a more normal Rangers year compared to when we had to be very safe and overly protective of each other,” Lesikar said.  “Not to say that we aren’t doing that now but we’ve learned and evolved throughout the semester.”

The crowd size isn’t the only thing to change. The Rangers have also been asked to always be on call in case one of their peers is affected by the coronavirus.

“This year we are teaching everyone how to use the horn in case someone gets sick with COVID-19, there is someone to fill their spot,” said Carly Glass, a senior on the Rangers.

The group typically finds it easy to fill their max membership of 25 and tryouts are typically held near the end of March. This year, they were virtual.

“A lot of people that showed interest in trying out didn’t want to have a digital tryout,” Leskiar said.

On top of that, safety protocols such as social distancing and mask requirements have made building team chemistry difficult for the Rangers this school year. 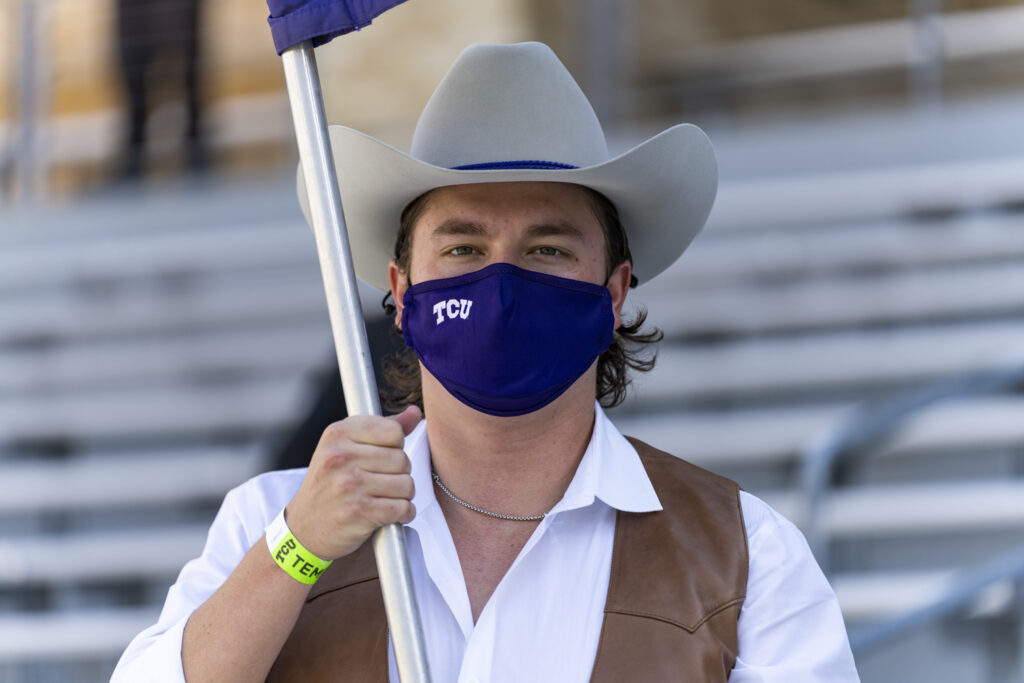 A TCU Ranger raises the TCU flag from the stands during a Horned Frog football game. (Heesoo Yang/Staff Photographer)

“COVID-19’s biggest impact has been on team morale,” Lesikar said. “It really hurts because normally they are so close.”

Although the Rangers can’t get together as a big group outside of practice, they do have practices two days a week and also have to be at games four to six hours before kickoff, allowing them to build comradery as a team.

“We honestly can’t get enough of each other, and that’s kind of tough this year because we don’t get to have all of that interaction that we would normally have,” said Glass. “To really be a part of something that you know everyone is giving up their Sunday, Saturday, and Friday for, it’s really special.”

For next semester, Lesikar said that they will continue with the protocols that have been working and plan to stay “as flexible as possible to roll with the flow.”

“The Rangers will adapt and overcome any task that is given to them,” said Lesikar. “There are a lot of sporting events in the spring; and that’s a good problem to have, so we will have to prepare for each of those different sporting events.”

Before the Rangers take on next year’s challenges, though, they must finish strong during the last stretch of fall sports.

With the academic semester ending last week, most students have returned home and will not be in attendance for any remaining TCU football games. Regardless, the Rangers will be there, Frog Horn and all, keeping the crowd energized and alive as the Frogs take the field.

TCU football has their final conference home game against No. 15 Oklahoma State this Saturday at Amon G. Carter Stadium.