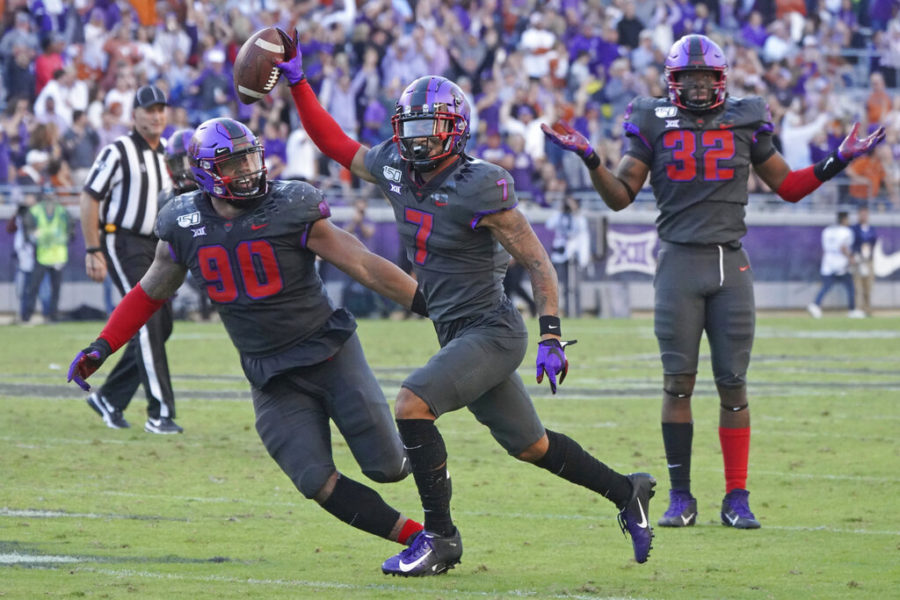 FILE - In this Oct. 26, 2019, file photo, TCU safety Trevon Moehrig (7) celebrates his interception with teammates Ross Blacklock (90) and Ochaun Mathis (32) in the second half of an NCAA college football game, in Fort Worth, Texas. Moehrig was selected to The Associated Press All-Big 12 Conference team, Friday, Dec. 13, 2019. (AP Photo/Louis DeLuca, File)

In 2018, Trevon Moehrig arrived at TCU as a four-star recruit and the fourth-ranked cornerback in all of Texas. None of that mattered to head coach Gary Patterson, though, so the talented freshman had to wait his turn behind defensive backs who had already earned their playing time.

Two years later, Moehrig has established himself as one of the greatest defensive backs in TCU history, and the icing on the cake came on Thursday night. The safety was awarded the prestigious Paycom Jim Thorpe Award as the nation’s top defensive back in 2020.

“I want to thank all of my coaches and teammates. I did it all for them,” Moehrig told ESPN’s Holly Rowe. “It just means the world to me.”

Best In The Nation!

Moehrig is the first player in school history to ever win the award and the first from the Big 12 conference since 2006. He is also just the seventh Horned Frog to earn a national award, with the most recent being former quarterback Trevone Boykin, recipient of the 2014 Earl Campbell Tyler Rose Award.

Following the 2020 season, Moehrig was named to the First Team All-Big 12 for the second-straight year. The junior tallied 47 tackles (30 of them solo) and 11 passes defended, which ranked second in the country behind fellow Horned Frog Tre’Vius Hodges-Tomlinson (13).

Just last month, the touted defensive back produced one of the most memorable moments of TCU’s season, grabbing a one-handed interception in the back of the end zone against No. 15 Oklahoma State to seal a Horned Frog win. The pick was one of two on the season for Moehrig.

That didn’t mean the new kid on the block could not impress, though. Moehrig’s effort, determination and speed quickly made him a regular topic of praise from Patterson in his weekly press conferences. At the end of the year, the freshman was named TCU’s Special Teams Most Valuable Player.

A new year meant new opportunities for Moehrig, as he moved into a starting safety role in 2019. He was nothing short of dominant, grabbing four interceptions and 11 total pass breakups en route to the third-most valuable season by a safety in the PFF College era.

His junior year saw Moehrig named to seven All-America teams and reaching new heights as a player, teammate and leader, ultimately leading to his decision to declare for the NFL draft.

Moehrig is ranked as the No. 1 safety prospect in the 2021 NFL Draft by ESPN’s Mel Kiper. The draft is scheduled to begin on April 29.