Women’s Basketball on three-game skid after loss to Oklahoma 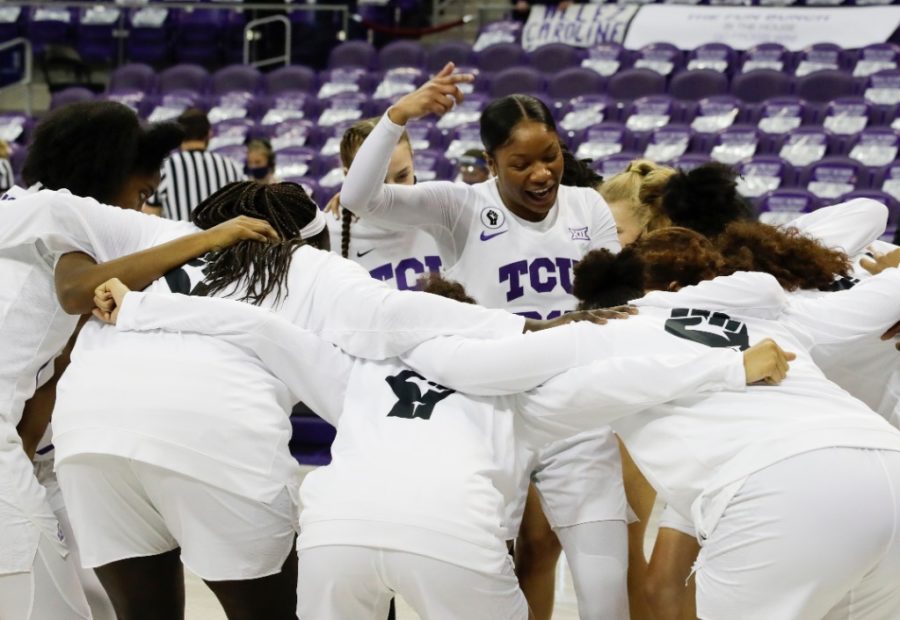 TCU falls to 8-12 with the loss against Oklahoma. Photo Courtesy of GoFrogs.com

A late fourth-quarter comeback was not enough for TCU women’s basketball on Wednesday night, as they fell 76-60 to Oklahoma.

“[I’m] disappointed in our team and how we performed especially in that first half,” head coach Raegan Pebley said. “Our practices leading into this and how we’ve been playing are very different from how we performed in the first half, the second half was better, but this is a league where it’s tough to recover from a 23-8 quarter.”

TCU was only down three going into the second quarter, but Oklahoma would go on to outscore the Horned Frogs 23-8 going into halftime to take a 39-21 lead.  As the game went on, TCU would trail by as much as 26.

A lights-out shooting performance from guard Taylor Robertson led the offensive barrage for the Sooners, as she finished with a game-high 28 points on a whopping six made-threes.

“I don’t know a better shooter in the country, a lot of people have dubbed her [Robertson] that and I agree,” said Pebley. “Especially when you don’t have a high hand against her and she’s coming up and getting her feet set she’s going to hit those. She’s a great shooter and we just have to be better in a week when we play them.”

For the Frogs, sophomore guard Tavy Diggs led the team with 17 points in the loss. She also had a career-high four assists.

“When Tavy is in that space and wants to be aggressive offensively and locked in defensively…” Pebley said. “I just think she can be a really special player. She can do some things that no one on our team can do and we want to continue to mature that and mature her and watch her flourish.”

With 17 points, Tavy Diggs (13) led TCU in scoring for the second time this season. (Photo courtesy of gofrogs.com)

Senior Lauren Heard snapped her 10-game streak of scoring 10 or more points, finishing the night with just nine. However, she did lead the team with nine rebounds.

The Horned Frogs travel to Manhattan, Kansas next Monday, March 1 to take on the Kansas State Wildcats. Tip-off is set for 6:30 p.m. and will be televised on Big 12 Now on ESPN+.