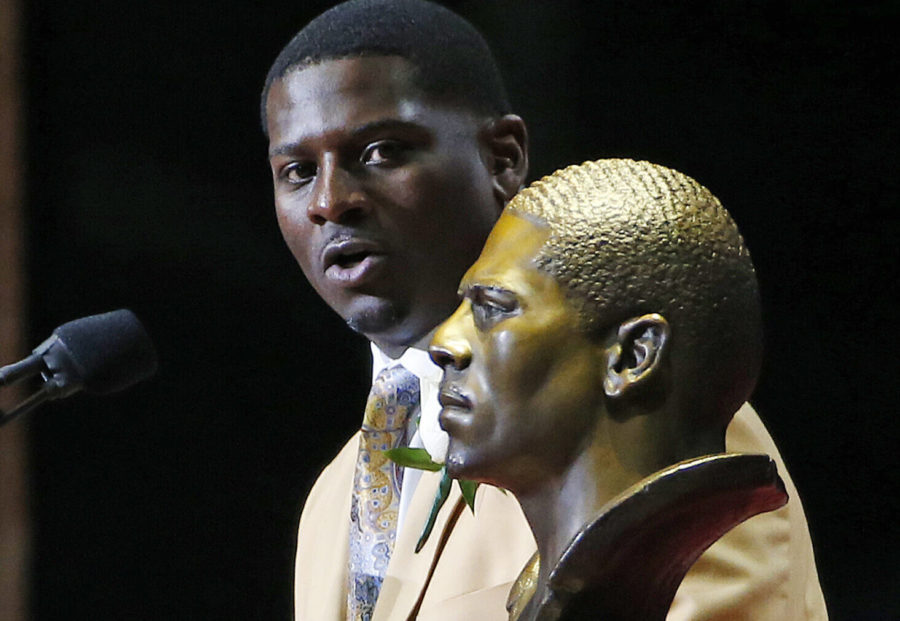 LaDainian Tomlinson speaks next to a bust of him at the Pro Football Hall of Fame inductions Saturday, Aug. 5, 2017, in Canton, Ohio. (AP Photo/Ron Schwane)

When the name Tomlinson was first given to George, who was enslaved in the mid-19th century on a Central Texas plantation just over 100 miles from TCU, it was a symbol of his belonging to a white man.

George’s great great great grandson is LaDainian Tomlinson, one of the greatest running backs in NFL history, who is using his name and platform to address the effects of racism felt by people of color in America today.

Using His Platform for Change

Last summer, that mission developed a new urgency as the U.S. was swept into a racial crisis following the death of George Floyd while being restrained by a Minnesota police officer.  Millions of people, including thousands of athletes and celebrities, renewed calls for social justice.

For Tomlinson, the racial conversation of the last nine months echoes what’s been on his mind for years.

Tomlinson was 19 when James Byrd Jr. was brutally murdered by three white supremacists in Jasper, Texas.  He remembers TCU teammate Victor Payne, a Jasper native, having to leave campus for a time following the incident.

Since then, Tomlinson has been looking for ways to use his platform to make people aware of and prevent things like the murder of Byrd.

Tomlinson, TCU’s all-time leading rusher and a member of the TCU Board of Trustees, jumped at the opportunity to join the university’s Race and Reconciliation Initiative, which is examining TCU’s relationship with racism, enslavement and the Confederacy.

Formed in July, the RRI was created to undertake the task of confronting TCU’s ties to racist ideals that date back to its founders, Addison and Randolph Clark, who both served in the Confederacy.

“I look forward to adding my voice to our collective voice,” Tomlinson said. “Amplifying the values and lessons learned from this initiative.”

On Thursday evening, the Horned Frog legend was the keynote speaker at an event hosted by the RRI, speaking for just over 20 minutes on the reality of racial injustice in America and what TCU can do as a school to fight it.

Titled “Acknowledging our past, defining our future,” Tomlinson’s speech was focused on healing. He highlighted why the RRI was important for TCU as a university in their journey toward becoming a place where people feel welcome regardless of their skin color.

Throughout the address, Tomlinson referenced moments from the speech he gave in August of 2017 at his induction to the Pro Football Hall of Fame. The former running back had spent the latter portion of his induction speech encouraging the audience to join “Team America” and fight disunity based on color.

The speech went viral, and a portion of it was used in a recent NFL commercial that was aired during the super bowl to highlight the league’s efforts to promote change.

“Football is a microcosm of America, all races, religions, and creeds living, playing, competing side-by-side,” Tomlinson said during his induction. “When you’re a part of a team, you understand your teammates–their strengths and weaknesses.”

This analogy was one Tomlinson connected to TCU as well, saying that people of all different backgrounds are at the university “living, playing, [and] learning side-by-side.”

“When you’re a apart of Team TCU, you understand your classmates–their values, their strengths and weaknesses,” Tomlinson said. “The university’s vision and values work toward the same goal: to become the finest person and valued member of society possible.”

Confronting the past and finding unity in the present through understanding and love is not a new challenge to Tomlinson, but rather one he has already had to overcome in his own life.

As a child, Tomlinson grew up on the very land on which George Tomlinson was enslaved by those with his same last name but a different color of skin. Now, that area is called “Tomlinson Hill,” as LaDanian and his Black family have worked to reconcile with the Tomlinson’s whose ancestors who were on the other side of the whip.

The TCU legend shared that, at the prompting of his mother, this reconciliation had come for him at the age of 22, when he went to visit Chris Tomlinson, the great great grandson of George Tomlinson’s slave owner.

Their conversation had been one of humbly acknowledging the scars that existed and confidently moving forward as family, and it is that same approach that Tomlinson called for TCU to take going forward.

“I firmly believe that God chose me to bring two races together under one name–Tomlinson,” Tomlinson said. “My story is TCU’s story.”

Tomlinson referred to parts of TCU’s past as an “ignominy,” saying that putting them under the light for everyone to see is the only way to “assure a more equitable, inclusive future for all at Texas Christian University.”

Through all of this, Tomlinson made to take several moments to emphasize his love for TCU, despite it’s shortcomings, and its significant impact in his life.

“I am a proud graduate of Texas Christian University,” Tomlinson said. “This university helped mold me into the man I became and the man I continue to strive to be.”

Despite the forming of the RRI and similar programs at other schools around the nation, as well as the increase in awareness surrounding the topic of racism in America, Tomlinson said that both TCU and the country as a whole still have a long way to go.

“It will never be done. There is nothing that I can say or anyone can say that will stop it all,” Tomlinson said. “It just will never happen, but what happens is we keep bringing awareness to a certain situation. We keep on speaking about peace and love for our neighbors.”

In fact, the experience of racism is not one that Tomlinson, even as a celebrity and millionaire, is immune from.

The Westlake, Texas, native shared that just a few months ago he was on a hunting trip with three friends, one of whom was also Black, while the others were white. The group met at a gas station before the trip, with Tomlinson alone is his black Lincoln SUV.

Though the two cars were together and had just begun to drive, Tomlinson alone was pulled over shortly after for no apparent reason.

“There are people that still only see a Black man first. They don’t see that it’s LaDanian Tomlinson,” Tomlinson said in an interview on Tuesday. “I get pulled over, maybe racial profiling, and then, originally, it’s like, ‘Oh no, this is LaDanian.’ Okay, what was the point in pulling me over in the first place?” 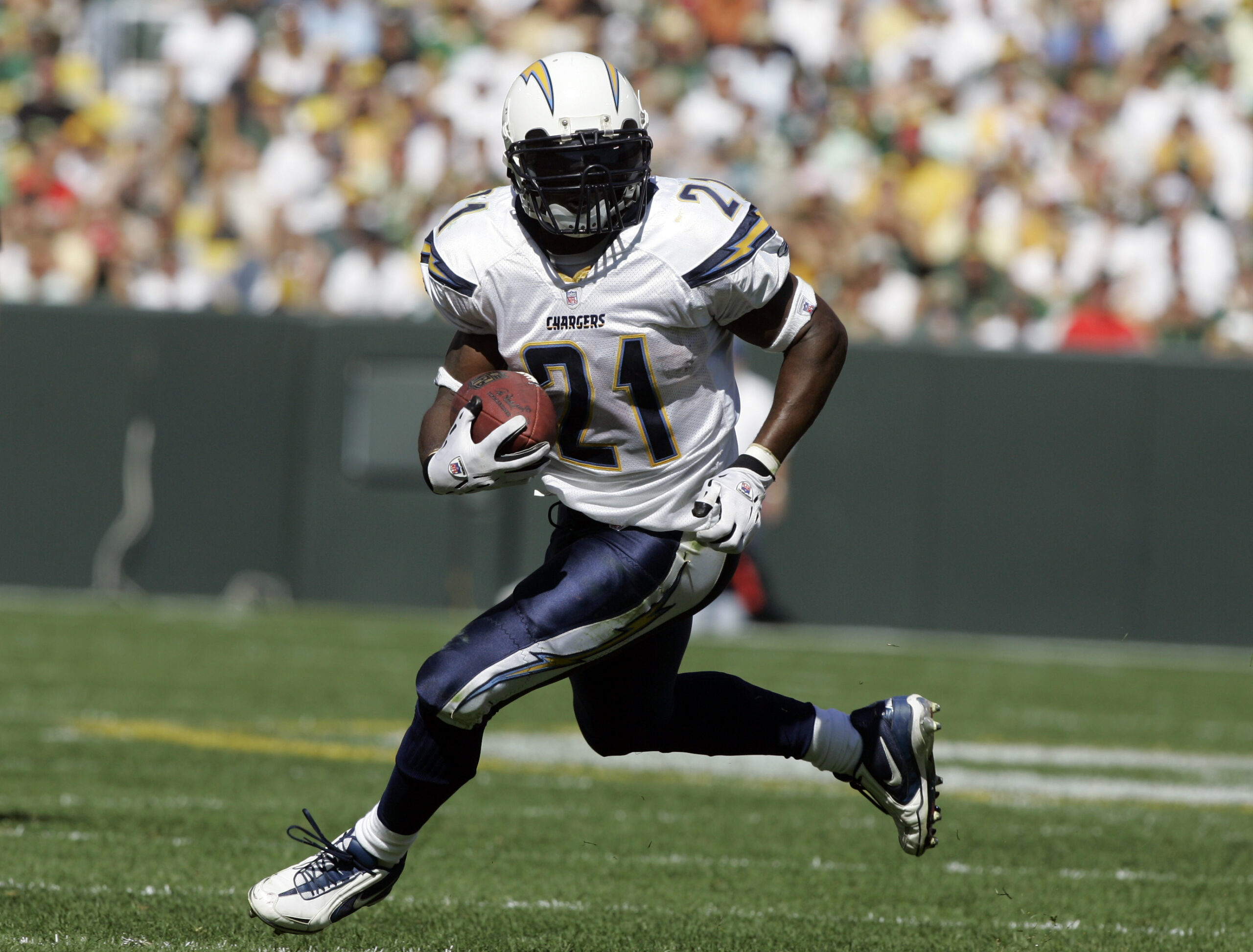 San Diego Chargers LaDainian Tomlinson (21) runs in the open field against the Green Bay Packers during the second half of an NFL football game Sunday, Sept. 23, 2007, in Green Bay, Wis. (AP Photo/Morry Gash)

Tomlinson said that he and many other Black people like him face fears like this everyday not only for themselves but also for their children and generations to come.

“What if my kids don’t become well known?” Tomlinson said. “What if they are just great citizens and that happened to them one day? You can easily put yourself in that position because it has happened.”

On the other hand, Tomlinson did say that he believes change is coming, though that the concrete nature of the change will only come from the dedicated efforts of corporations, organizations, and everyday from all races.

For college students personally, especially those who are white, Tomlinson said that the key is talking to and learning from those who have actually experienced the ways racism effects black people everyday.

“In today’s age, if you don’t have a friend that doesn’t look like you, shame on you,” Tomlinson said.

In the coming months, the RRI, with Tomlinson by their side, will continue working towards uncovering the truth about TCU’s past and what that means for its present and future.

This work all leads up to “Reconciliation Day” (April 21), as the RRI reports on their discoveries and the university takes its first big step in becoming the true “Team TCU.”